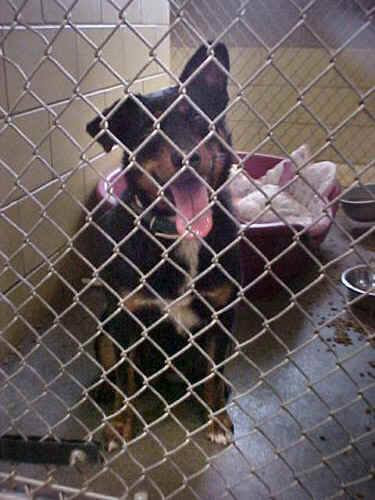 I found this picture in the SPCA web site and I wrote this: "My new possibility for a dog.  This is a female Australian Shepard mix....I'm going to check her out some night this week."

It was the ears that got me.  I have since seen lots of dogs with one floppy ear like this, but this was probably the first time I'd ever noticed and she just looked so cute. Her name was Appleberry, which I thought was the dumbest name...but if we adopted her we would definitely change it.

I called the SPCA and they suggested I make an appointment to come and see the dog.  On May 29 I went to a local t-shirt place where someone who was fostering her worked.  She suggested I take the dog out for a walk.  That night I posted this photo: 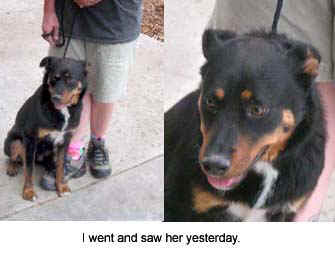 It actually felt kind of weird being out walking with her, but we didn't hate each other.  I went home to talk with Walt and he agreed we could adopt her. But it wasn't that easy.  I wrote this in my journal:
"No, we still don’t have a dog. To their credit, the SPCA does a more thorough background check than the Department of Homeland Security. The future of these dogs, many of whom have not had the best of pasts, is very important to these dedicated volunteers. I understand and appreciate that.

"The dog had kennel cough and the woman thought she would hold her for a week until she’d lost the cough and until she had been spayed. When I left her, I said that I would contact her that night (after conferring with Walt and showing him the pictures) and let her know if we wanted to take the dog.
"Up to this point things were still going well and we were still communicating.

"I checked with Walt, he agreed we could get the dog and I sent a note (it is, she tells me, more efficient to reach her by e-mail, so we did this all without telephone calls) saying that yes, we wanted the dog.  I get an e-mail from her:


We need to set up a time to meet with you and your husband and your dog. I could have someone bring her over to your house later today and we could go from there. If she gets along well with your dog and your husband likes her, then we could do the paperwork.

My assistant Ashley can brng her to PETCO today, Sunday. Call her to arrange this."


How innocuous that statement was "My assistant Ashley," who has become one of my invaluable friends and with whom we have been through so many doggie adventures!

And then, on June 3, we brought Appleberry home.


"We went out to Woodland to check on 'The Dog.'  I liked her when I met her a week or so ago, but she had me today when I sat down and she put her head in my lap and looked up at me with those big eyes.  So I guess we've added a new member to our family.

"She seems to be a real sweetheart and our first stop was at Petco to get her a collar and toys.  Even Walt, who has been rolling his eyes at this whole idea of mine, says she's a 'real sweetie.'  She is curled up on my feet as I write this."

She even started her own blog. 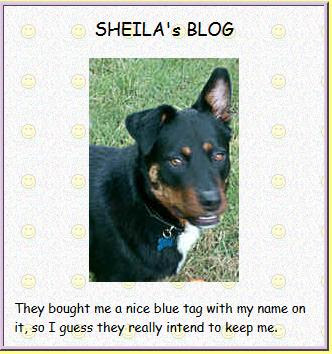 That was 11 years ago.  We called her Sheila.  I still love her floppy ear.  She's been (and continues to be) a wonderful dog.  I'm going to get her a special treat for dinner tonight.
Posted by Bev Sykes at 12:00 AM

Email ThisBlogThis!Share to TwitterShare to FacebookShare to Pinterest
Labels: Sheila