Sandy and I had a long chat about Charleston and the depressing state of things in this country.  While we were talking a guy came in with his daughters and after time in the kids' room, they bought four books, for which he paid with a $100 bill, totally wiping me out of all change, fortunately it ended up not being a problem.  We always check large bills like that, to avoid counterfeit money, and I was happy that his was OK.

A guy who looked like a farmer came in, with dirt under his fingers and rumpled clothes. But the baseball cap he was wearing was from Cal Tech and he joined in our discussion about Rachel Maddow and world affairs and then went on to talk about author Wallace Stegner and how he had seen him at Stanford.  He and Sandy both talked about Stegner's influence on other authors.  Obviously I had wrongly judged a book by his cover!

A woman came in looking for "Unbroken" and was unable to find it in the biography section, so left.  An hour or so later, I passed by the adventure shelves and found it there. Too late, unfortunately.

A guy came in and asked if he was in the middle of "famous downtown Davis."  He bought 2 bargain books, but we talked about small towns and he said they were "breeding grounds for Republicans."  I told him I didn't think that was quite true about Davis and that we were more liberal here.  He then asked for directions to a bank, which was two left turns from Logos and we laughed about everything in town being "left."  As he walked out of the store, I noticed he had an keychain with an Australia map hanging from the back of his backpack.

A chatty man didn't buy anything but wanted to chat about books.  He asked me what kind of books I liked and recommended Gillian Flynn's novel, "Sharp Objects," which he said was as good as "Gone Girl."

A guy who could have been the younger brother to scenic designer John Iacovelli, with lighter hair (in a pony tail) and a scruffier beard was looking through the fantasy section, but left without buying anything.

A lovely woman came in wearing a shirt with a logo that said "FSM" on it.  It intrigued me because in my day, FSM stood for the Free Speech Movement in Berkeley. 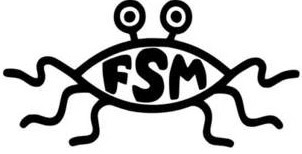 She explained that it stood for "Flying Spaghetti Monster" and told me about the movement, which I later checked on Wikipedia:

The Flying Spaghetti Monster (FSM) is the deity of the Church of the Flying Spaghetti Monster or Pastafarianism (a portmanteau of "pasta" and "Rastafarian"), a social movement that promotes a light-hearted view of religion and opposes the teaching of intelligent design and creationism in public schools. Although adherents describe Pastafarianism as a genuine religion, it is generally seen by the media as a parody religion.

She said she had to be careful where she wears the shirt, but is comfortable wearing it in Davis.  ('Cause, as we discussed earlier, we are all "lefties," dontcha know")

She was looking for books by P.G. Wodehouse and came across a first edition, "Shibumi" by "Trevanian," the pen name of American film scholar Rodney Whitaker, who wrote several novels under the name Trevanian.  She was thrilled with her find and also happy to find several Wodehouse books.  A good day for her!

A trio of young women arrived, one in a sun dress, one in shorts, and one, unbelievably in a long black skirt and pink sweater (it was >100 degrees today).  The girl in the black skirt kept lifting it up above her knees and fanning her legs with it.  There were lots of giggles as they checked out the contemporary fiction shelves and finally the woman in the shorts bought one and the three left, still giggling.

A couple came in, this woman also in a long dress, but it was a sun dress in a very pretty floral pattern that had slits up both sides almost to her hips.  She also wore a straw hat and looked as cool as one can on a day like today.  Her male companion had tan cargo pants with vertical stripes and a light blue shirt with horizontal stripes.  He also had a 5:00 shadow.  They checked Sci Fi for awhile and then left.

Another group of 4 women arrived, 3 in skirts and one in pedal pushers with tall flip flops (the soles were about 1" thick).  One of the group was pregnant and was looking for a children's book called "Fox Eyes" while one of her friends wanted "Panda in the Paintbox."  It is amazing to me how many people come into a used book store and expect us to have all of the inventory on computer so we can immediately check for availability of books. I wonder if they have the same expectation of the Green Apple Bookstore in San Francisco, which is about three times the size of Logos. 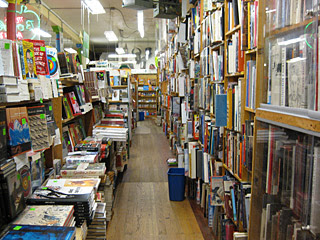 Part of the fun of a used book store is the discovery...like finding a first edition of a book by Trevanian, for example!

My friend was one of my last customers, at 5 p.m.  He didn't find anything he wanted so left, but later when I went to pick up a pizza for dinner, I ran into him at the pizza place.

There were no customers between 5 and 6.  It was not a super busy day today, because of the heat, I'm sure, but still I had more interesting customers than I do many days.
Posted by Bev Sykes at 4:34 AM