It was a busy day, only some of which celebrated Fathers day.

Walt went off to Mass while I boiled up a mess of eggs for stuffed eggs later.  When he got home, I made him blueberry waffles (from scratch -- woohoo!).

Then I set to work making the stuffing for a dozen and a half hard boiled eggs.  Usually I use mayonnaise and garlic powder, but when I did that last time it was way too salty, so this time I used mayonnaise and a tiny bit of cumin, which I decided I liked very much.  It added just enough flavor that it tasted different, but you might not be able to put your finger on why.  Everyone seemed to enjoy them.

Then there was another fruit salad to make, using the fruit left over from Al's birthday party of the day before (minus blueberries, which went into the waffles).  I had watched Ree Drummond, the Pioneer Woman on the Food Network make a fruit salad, to which she added a bit of a syrup which coated the fruit and made it look pretty, so I decided to try that, boiling up sugar and water along with the rind of an orange and the juice of half of it.

It did add a nice flavor to the salad, but as I poured it over, I was reminded that Drummond lives in Oklahoma, which may be one of those states that don't get the flavorful fruits that we have here and wondered if maybe I was gilding the lily.  But no matter.  It tasted good.

Then it was time to finish folding my mother's laundry and get it over to her before she is forced to go commando around Atria.  Sunday afternoon must be the time to go.  There was TONS of parking.  3 slots in the Atria guest parking area (where there is usually nothing), and lots of on-street parking.  Walt pointed out that the UCD students are also on break so that might account for all that wonderful parking space.

My mother is looking more and more tired.  She's old, you know :)  But she really is seeming it these days.  Today she said she felt "strange" and couldn't describe how she felt, but that it was different.  I have the feeling that I'm starting to watch her fading away.

After I got home from Atria, Walt and I gathered up the stuffed eggs and fruit salad and headed over to Marta's step-sister Lindsay's home, where they were having a gathering of all the dads in the family.  Lindsay's sister was there with her daughter Alexis, almost 2, who was one of the cutest toddlers ever. 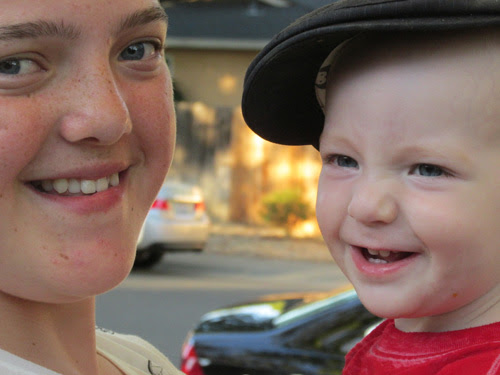 (with Lindsay's daughter, Isabella)
There was a nice barbeque dinner and then everyone gathered in front of the house to take the Dads group photo. 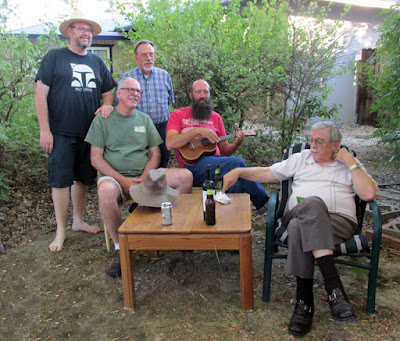 As I sat there I discovered I was sitting under a rare Davis shoe tree. 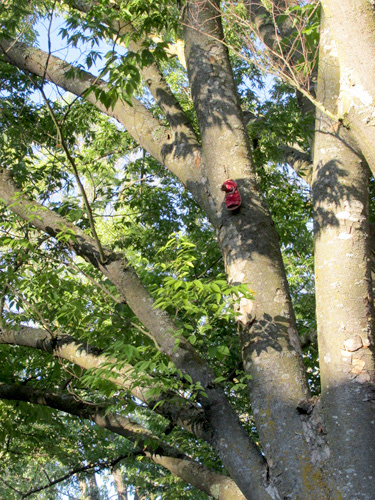 We said our goodbyes and came home and now, in the middle of the night, I'm trying to finish off a review I started this afternoon, and didn't complete.

In the morning I must get Sheila to the vet's because her leg is very swollen and she's having difficulty walking.
Posted by Bev Sykes at 1:18 AM