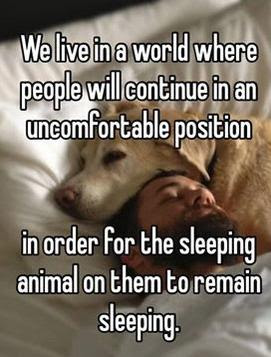 I thought about this sign I saw this morning as I was sitting in my recliner, on a lump of a towel Polly had tried to shape into a nest, with cramps in my toes and a bit of restless leg syndrome. I was also very thirsty. I desperately wanted to get up.  But Polly was sleeping so soundly and she hadn't slept in my lap like that in quite awhile -- not sure why not.  I hated to disturb her.

It reminded me of this morning when I was wide awake and needed to get up and come into the family room to change positions before going back to sleep, but Polly was curled up on my back and Sheila was stretched out in front of the couch blocking the place where my feet needed to go in order to stand up.  But she was so comfortable....

I have turned into my mother.  Her dachshund, Max, was the most spoiled dog in the world.  In fact, in those meme questions that ask if you could come back as an animal, what would you come back as, I usually answered "my mother's dog."  Remaining in an uncomfortable position in order to let Max remain sleeping is something I can see her doing many times!

Speaking of my mother, as unpleasant and frustrating as Atria was yesterday, it was a 180 degree change today.  I dragged my feet getting there, dreading a repeat of the day before, but knew I had to get there because she needed her next set of pills.  But we actually had a good visit, this time mostly concentrating on her family, how much she misses her sister Marge (Peach's mother) and how lately she's been dreaming about her mother having very real conversations with her, and waking up convinced that she was still somewhere in the room.  She seems happy to be having those dreams, and just sad to wake up.  I hope that some day she'll just decide to take her mother's hand and go off with her to find Marge and the rest of her siblings.

I came across an article today that said that the very first drive-in theater was built in Camden, New Jersey in 1933.  The innovative idea turned 82 earlier this month (June  6). 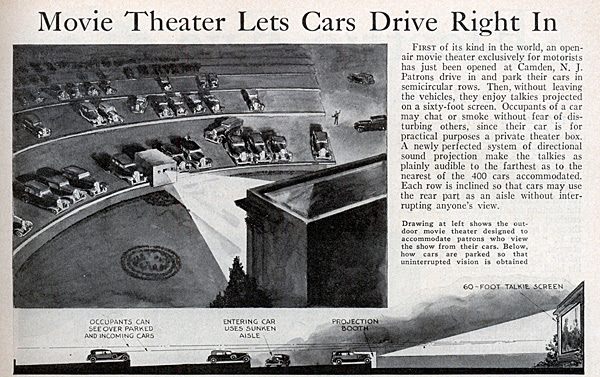 How many of you remember going to the drive in as a kid...or with your kids?

I don't know how often my family went to the drive in, but often enough. We would bring stuff to eat, Karen and I would dress in our nightclothes and we would have blankets to wrap up in when we inevitably fell asleep.  Seems to me we felt naughty going to the snack bar ('cause you always had to go to the snack bar) in our jammies to get popcorn and a soft drink.  Some of the theaters had playgrounds where the little kids could play until it got dark enough to start the movie.

The sound was always awful, I remember. 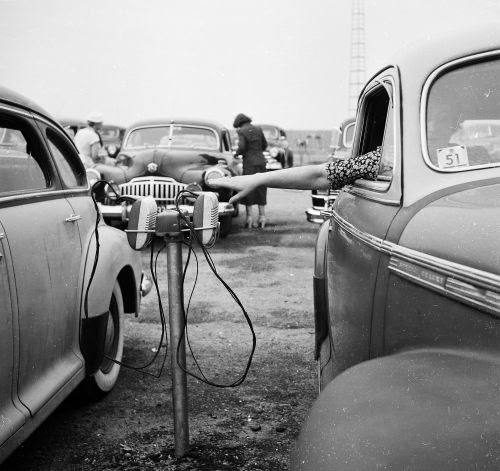 Those speakers that you hung on your rear view mirror or on the inside of the front window always had static and sometimes didn't work at all...then you had to drive to another station and try again.  Apparently at some point they found a way to connect the speakers to your car's radio, but that was after we stopped going.

I went a few times as a teenager, and was one of those "good girls' who went to see the movie, with maybe a little chaste necking thrown in for fun, but you never saw the car I was in steamed up.  I was there to see the movie.

We took our kids to the drive in a few times, I remember.  It was a way for the whole family to see a movie at less than theater prices (and bring the baby without disturbing other patrons), but they were pretty much waning by the time our kids came along, though it was always fun to catch a snippet of the current movie as you drove past one on the highway at night.

Email ThisBlogThis!Share to TwitterShare to FacebookShare to Pinterest
Labels: dogs, drive-ins, My Mother