The morning started taking Sheila to the vet.  Her back leg was swollen and she had some lumps I'd found.  She also needed an annual exam (about 2 years late).  She has been panting a lot lately, which I figured was at least partly caused by the rising temperatures lately.

She's such a perfect dog to take anywhere.  She loves sitting in the back seat and looking out the window.  I usually open the window a crack and she sticks her nose out.  Today, she was happy to just sit there and look--didn't get up to stick her nose out the widow.  I attributed it to the bum leg.  And she loves everybody.  That stump of a tail just wagged a mile a minute whenever anybody came into the vet's waiting room.

She weighs 51 lbs, up about 5 lbs from last time she was weighed.  Then the doctor looked at her leg and said he would give me some antibiotics and see if that helped.

Then he checked the lumps I'd noted and asked if he could take some aspirates and see if he could figure out what was going on.  He listed a few possibilities, the last of which was "lymphoma" (why does nobody say "cancer" any more?  Is lymphoma a less painful word to use?).  But he was encouraging because he said that if it was lymphoma, we had caught it early.  This was a good thing.

He took the samples and said that he would call me later, and if I had not heard from him by 5 p.m., to give him a call.  He also told me he always reads my reviews.

The word "lymphoma" hung heavy in my head and I decided to take Sheila to Jack in the Box to share a cheeseburger with her.  She ate half of it and I was going to split the second half with her, but she wasn't interested.

We came home to wait for the call.  At 5 p.m., I called him.  I could tell just by the way he said "hello" that the news was not good.  "It's lymphoma," he said, "...and we're probably talking weeks..."  Weeks?  What happened to "lucky that we caught it early" ??  So now there are decisions to be made.  We've decided against chemo, which would be around $2,500, which, much as we love her, seems extravagant for a 12-13 year old dog.  We're going to start Prednisone and see if that will slow things down.  Ashley tells me there are lymphoma trials at the vet school, but they seem to involve week-long stays there and injections and tests.  If Sheila is in her last weeks, I don't want her to spend them confused about why we've sent her to some place where she has to live in a cage and be hurt regularly.

Needless to say I'm a bit emotional right now, which may explain the second catastrophe of the day...distracted brain function.  I baked chicken thighs for dinner and when it came time to get them out of the oven, the pan they were in kind of tilted, spilling a whole bunch juice on the oven floor.
Thinking I would take care of it right away,  turned on the self-clean oven feature.  In a matter of seconds, there was thick smoke pouring out of the top of the stove, every room was filled with smoke, and every smoke alarm was going off (this lasted for half an hour and not a single neighbor came to check on us!) 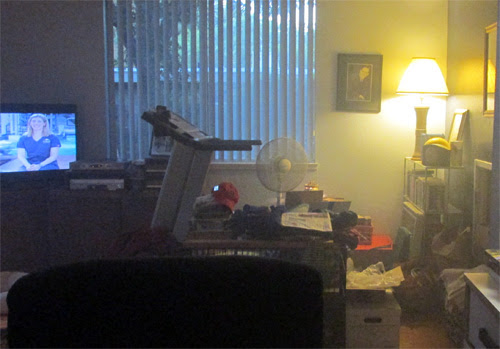 This is after about 20 minutes, when the smoke was starting to clear...
I didn't get the real dramatic scenes!

Walt had every fan we have blowing, and I tried to turn off the cleaning feature, but the smoke was so thick that I couldn't see the controls on top of the stove to find the right button (but I sure did get a taste of what it must be like to die of smoke inhalation!)

I was finally able to turn off the self-cleaning feature, but then I discovered that there was a fire in the oven. 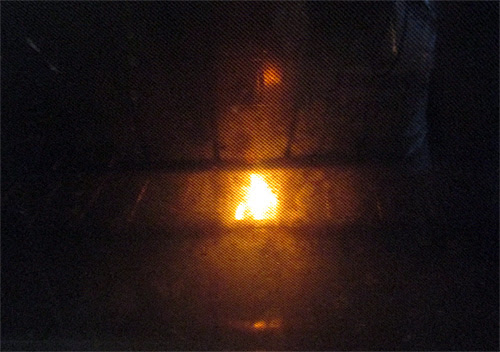 I thought the liquid was on fire but after the oven door finally unlocked, Walt discovered a charred chicken thigh that had burned to a crisp.


The house was so smoky, we couldn't eat inside, so decided to eat on the patio.  Sheila, uncharacteristically, was sleeping somewhere and not begging for food. 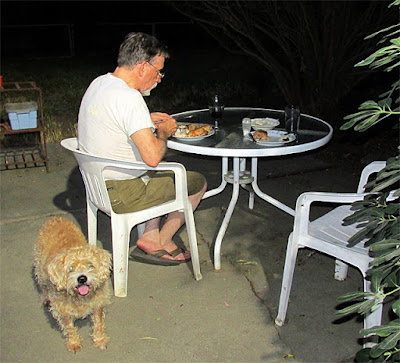 I feel like shit.  I love this dog.  She's the first dog we've ever had who is really mine more than anyone else's.  They are all ours, of course, but Sheila was mine first.
Posted by Bev Sykes at 12:00 AM

I'm so sorry. Lots of hugs headed your way.

So sorry Bev. She is a special dog and you gave her a wonderful life.

I've only just discovered your blog but I am so sorry. I also have a 14 year old dog so I know it's just a matter of time. They really, really creep into our hearts.

Hugs to you and your husband. Dogs just aren't with us long enough, and having to make those end-of-life care decisions is even more difficult.