I almost didn't make it to Logos today, thanks to having lunch at Atria.  First, I sat with my mother for about 20 minutes and decided she'd been taking lessons from Henry Higgins.  Remember, he tells Eliza, when he's ready to take her to Ascot, to stick to two subjects:  the weather and her health.  We went back and forth from "is it hot outside?" to "I'm old, Bev" and then "I know it's hot because no leaves are moving on the trees," to "will I live to be hunnert?" to "now a leaf is moving so it must be a little cooler."  And on and on and on.

Then we went to what I can only call the worst lunch I've ever had at Atria.  First, we sat with a woman who is so deaf she can't hear what you shout at her, and a woman for whom English is not her first language, so there wasn't much conversation except my mother surely asked me 25 times what I was doing this afternoon.  Once she asked if she and I were doing something together this afternoon.

But lunch was a patty melt, something I like, except the bread for this was as hard as a crostini, the meat was just warm, and if that pale yellow thing on top of the meat was Swiss cheese, you couldn't prove it by me.  The bread was soaked in some sort of oil or butter and then it tasted like it had been sitting in the warming oven for hours.  I only ate half of mine (and I only had half a sandwich to begin with).  Then there was a cherry pie which I should not have finished because it was gooey and too sweet even for me.  By the time I got home, I was having terrible stomach cramps and if it had not been 40 minutes before my shift started at Logos, I would have called Susan and told her I couldn't work.

But I laid down on the couch for half an hour and felt more human when I got up.  Sandy told me I looked very pale.  But she stayed for about 40 minutes and we had a lovely chat about Atria (where her father died), the Davis schools, books, and the landscaping they have been doing to their home, which is now finished.

Four customers came and purchased books while we were talking.  One woman bought 2 biographies, one of the Wright Brothers.  It was not the new book by David McCullough but she and Sandy discussed that book too.  One woman bought 2 contemporary fiction books, one from the literature shelves, and her male companion bought a children's book.  A woman bought 1 bargain book and 6 science fiction books.  She and Sandy discussed other authors.

I asked Sandy if she had read "The Goldfinch" and, like me, she has it on her Kindle but hasn't read it (I had it on my Kindle for 2 yrs before I read it).  She recommended "All the Light We Cannot See" by Anthony Doerr, which I mention here just so I won't forget the title when/if I decide to read it after I read the other hundred books waiting for me!  She also mentioned a book called "Geek Love," which sounds so strange I may have to put it on my "to be read" list.

Before she left I told her how frustrating it is for me when people come up with stacks of books and place them on the desk as far away from me as possible.  She said she noticed that too.  We thought maybe if we moved the bowl that the free bookmarks are in, people would then put the books down closer to us. So we did. 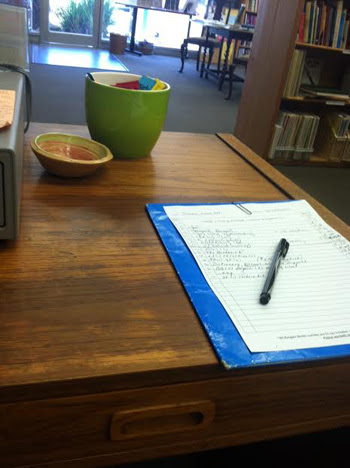 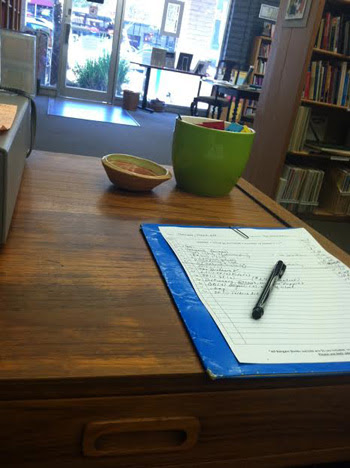 Sandy left and within seconds a woman with an armload of books came to the desk, moved the bookmark bowl out of the way, and stuck the books so far away from me I could hardy reach them.  So much for that idea!

The next customer was a woman who bought a dictionary for her daughter, who is starting to play on-line Scrabble, a book of Indian essays, and a book of photos of Wegman puppies.

A very tall stooped older man wearing a Cal Tech hat had 4 bargain books and then bought 4 more books by Wallace Stegner, one of the authors Sandy had recommended to the woman with whom she was discussing books.

A guy with a Blood Source sticker and his arm wrapped up like they do after you give blood came in and that was good because I had forgotten I have an appointment to give blood at 10 a.m. tomorrow.  I thanked him.  He bought a Ray Bradbury book and a coffee table type book on Tolkien's world.

What with my stomach pains and general malaise when I left home, I had forgotten my bag in which I bring a cold bottle of water each week, so I took a quick drink of tap water because I was so thirsty and remembered why I hate Davis water.

A geeky couple came in and checked Fantasy, Sci Fi, music, and theater and asked if we had an astrology section  Then they left without buying anything.

A middle aged woman wearing a rosary as a necklace checked travel books and asked for something that I could not understand, even though she repeated it three times, each time softer (I guess figuring that the lower she talked the better I could hear!  I find this is what happens with a lot of customers who come up to talk with me.  If I can't understand them, they repeat, softer.)  I did get that it appeared to be a contemporary fiction book, so I directed her to that section, but she left empty handed.

My friend arrived right at 5 p.m. and bought a book of Victorian fairy tales (which I noted later that I had marked on the sale sheet as "fairy tails")

A guy who looked like Michael J. Fox, circa Family Ties but with a huge cowlick.  He was dressed in a white shirt that was pressed so that it almost looked like a dress shirt, and then sky blue shorts.  Neither he nor his girlfriend bought anything.

My last client of the day was wearing a Harvard Lacrosse t-shirt, but he didn't buy anything either.


Walt and Peter arrived.  Peter took over, and I was happy to find a bottle of water in the car.  I was very thirsty!
Posted by Bev Sykes at 1:09 AM