We went back to San Rafael for lunch again today and I decided we are desperately in need of more birthdays! This time we were to be celebrating the two women who have June birthdays.

The last time we were scheduled to go to San Rafael for lunch, my mother told me she was feeling dizzy and didn't want to leave Atria.  Since she has been more adamant about not leaving Atria and nervous when we are out (the last time was Mothers Day) that I wasn't sure if she was really dizzy or if she just didn't want to go.
,
I prepared her for this lunch again, putting it on her calendar and talking about it everyday I was there to visit with her (each time, of course, she hadn't remembered it and got the "you say it's on my calendar but I don't have to look at my calendar if I don't want to..." look on her face.

This morning I called her to remind her I would be picking her up in an hour and she didn't ask why..just said she would be ready.  And, unlike last time, when I got there, she was ready and knew we were going "somewhere" but couldn't remember where.

Whatever.  It was better than last time.

The drive down was the same, explaining over and over again where we were going and who was going to be there, interspersed with comments about how beautiful the trees were and what a shame it was that the grass is all dead looking.  Same ol' same ol'.

We were eating at Arriverderci again. 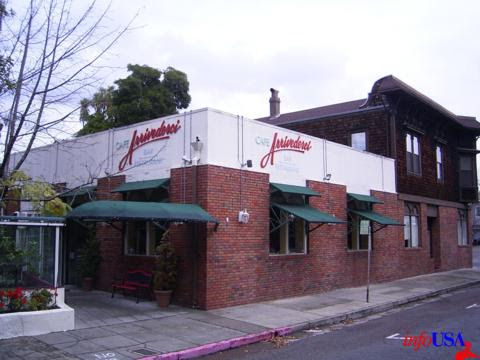 It's really a lovely Italian restaurant in San Rafael and so far everything I've had there has been wonderful.

We encountered almost no traffic, so we arrived early but I knew we had a reservation and that, the weather being perfect, we were sitting on the patio. 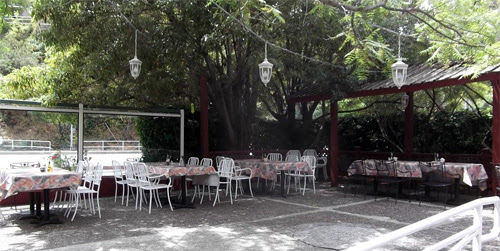 As the waiter was walking us to the table to wait for the others, I ordered my mother a vodka and tonic (she actually had 2 over the course of the lunch, which maybe helped!)

As I watched her joke and laugh and reminisce with her friends, the ones she wasn't sure she would remember when she saw them, I realized that this kind of mental stimulation is so good for her.  Really, she gets zero mental stimulation...and refuses to consider anything.  She won't join in any activities, she can't remember how to get upstairs where the puzzles now are, I've given up her actually making friends at Atria--the memory is just too bad for that, though she finally has people she recognizes and enjoys at mealtimes.  It takes coercing to get her to leave Atria for anything.  And even if you can get her to leave, her back pain (which she won't take a pain pill for) makes it difficult for her to move much.

She says she reads the paper, which she has done cover to cover her whole life, but if there is any tragedy or triumph in the world, or a win by the Giants or 49ers, she doesn't remember reading it.  I sure don't now how to stimulate a brain that refuses to be stimulated.

Still, this was as "with it" as I have seen her since February, when we last went to one of these lunches.  Next one is scheduled for September, this time to celebrate my mother's birthday.

Getting back in the car, I plugged in my 40s playlist again, since it had been such a success last time.  And this woman, who sometimes doesn't remember she has great grandchildren and never remembers their name, sang every word to every bloody song for the hour and a half drive home.  Music does amazing things to brain function. 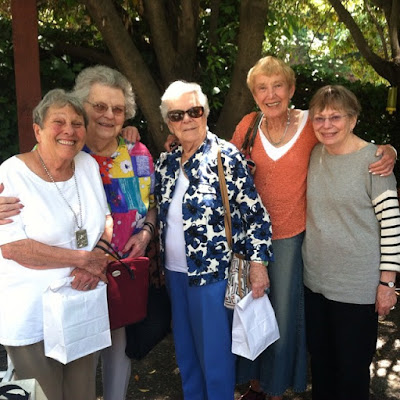 Email ThisBlogThis!Share to TwitterShare to FacebookShare to Pinterest
Labels: Lunch with HodgePodge