Thoughts on Outlander (spoilers ahead)

First off, in the comments yesterday, Elaine asked me if I'd ever written about our experiences in London on 9/11.  The specific entries disappeared when Geocities shut down, but I still had the original entries on disk, so I've reloaded them to FTW.  If anybody is interested in reading them, go to yesterday's entry and check the links I posted.

So.  The finale of Season 1 of Outlander has ended.  Spoilers ahead.

It was brutal, it was cruel, it was ugly...and it was beautiful.  If you are a regular viewer of shows like NCIS, Criminal Minds or SVU, the brutality will not turn your stomach as much as if you are, instead, a watcher of PBS and the homemaking channels.  The difference is that it was darker and dirtier and the director did not shy away from the worst of it.  No pleasant dissolves to relieve the raw terror.  It was all there, and it needed to be to be faithful to the book.

I have seen complaints about the nudity (speaking, of course, about male nudity--nobody seems to care about female nudity) but I felt it was done perfectly, within the context of the action.  To have "cloaked" (as it were) body parts would have felt fake.  Nothing was pornographic about Black Jack Randall wandering about in the altogether after making love to Jamie,  It would have felt false if he had pants on...and the moment was brief.

But that's been the best part of this whole series.  It felt real, not contrived.  It stayed very true to the books, and when it strayed, it was for a good reason.  (E.g., the final scenes in the book took place in an underground hot spring, but to do that would have meant filming the entire end of the series with the characters in the nude, so the way they ended it was just as natural, but it changed the locale of the final scene so they could remain clothed and we could concentrate on the dialog.)

People complained to author Diana Gabaldon that the choice of Sam Heughan as Jamie was wrong.  He wasn't tall enough, his hair wasn't red enough. But by the end of the second or third episode, nobody was saying that any more.  Heughan was the perfect Jaimie and only grew better as the season progressed. 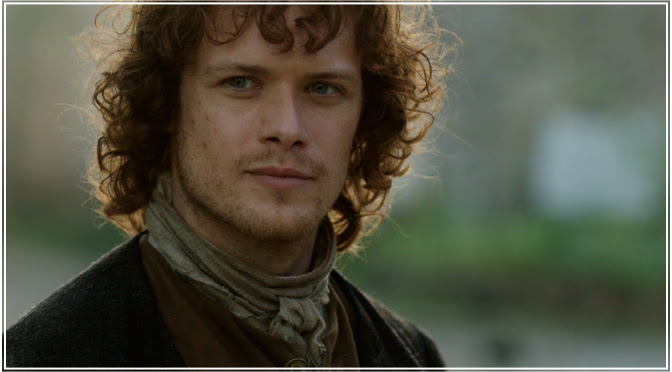 I hated Tobias Menzies as Jack Randall, but only because he was so deliciously good in the role.  It made liking his descendant, Claire's first husband Frank (also played by Menzies) difficult to like, but boy, nobody can be a slimy as Menzies' Randall...and it is so blatantly clear that he is a sociopath as he regards the pain he has inflicted with an air of bemused disinterest, taking pride in his "work," and the physical and emotional scars he left behind. 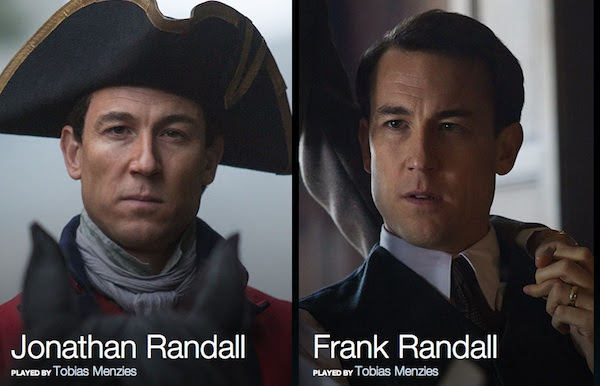 I can only think of a couple of things that did not ring true for me in the 16 episodes.  In Episode 1, Claire has stepped from 1945 into the 18th century, wearing a lightweight dress and with bare legs.  Shortly thereafter she is rescued from the clutches of Black Jack Randall by the Fraser clan and taken on a horseback ride that lasts at least two days and one night--and this is no gentle walk either, but a full out gallop.  She seems not to have been on a horse since childhood and she is sharing a saddle with Jamie (in the rain much of the time), but at no point does she seem to be in any discomfort and she hops off the horse as if she'd just been out for a brief canter.  I can't imagine that her bare thighs were NOT bruised and probably blistered, her tush not so sore she couldn't sit down, and that she didn't want to walk with an exaggerated bow legged stagger! 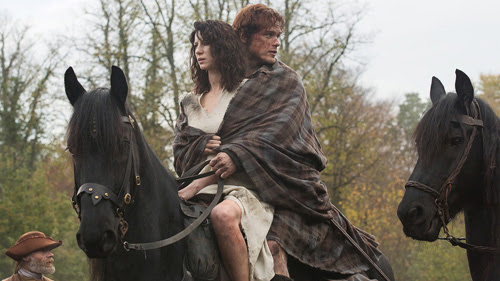 But let it pass.

The other thing that I found difficult to accept is how much Claire drinks.  She and Jamie must have shared 2 bottles of Scotch on their wedding night, yet neither of them showed any sign of being drunk. 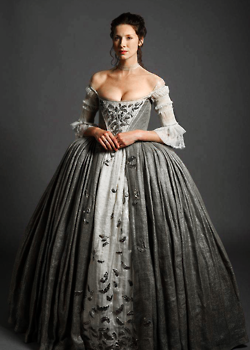 I'm sure many feel that "The Wedding" is their favorite episode, where Claire is forced to marry Jamie, whom she barely knows, in order to make her a Scot so that she can't be taken prisoner by the British.  The episode is played beautifully, in flashback to preparations for the wedding, and the present to the actual event.  The view of Jamie when he first sees Claire is my favorite shot of him in the whole series, and the first shot of Claire in her magnficent wedding dress was amazing (the costumer said, in interview, that they used a type of embroidery that has not been done in 100 years, and Catriona Balf, who plays Claire, said that the dress weighed 40 lbs.  They had to build a special seat for her to use during takes).

The wedding ceremony, in a chapel lit by candles, was simply beautiful. 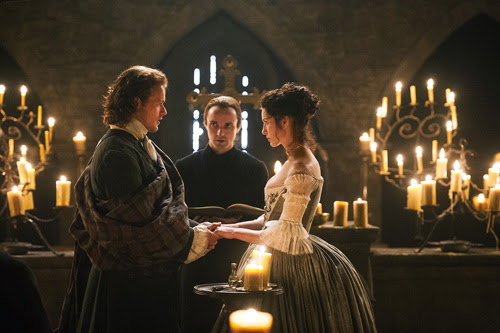 It was, of course, the consummation everyone wanted to see and it was handled beautifully, the first encounter quick and to get it over with, the second more lovingly as the two are beginning to know each other's bodies, and Claire deciding she'd better teach this young virgin how to really please a woman.  There was nudity for both of them, but again, not anything you'd call pornographic.  The shot of Claire from the back, as she removes her gown for Jamie, is breathtakingly gorgeous.

Gabaldon's books have a lot of sex in them, and the producer of this series has not shied away from that, but has handled all of the encounters tastefully (unless, as I said, you are a watcher of PBS and the Home Shopping network and unaccustomed to such things!) 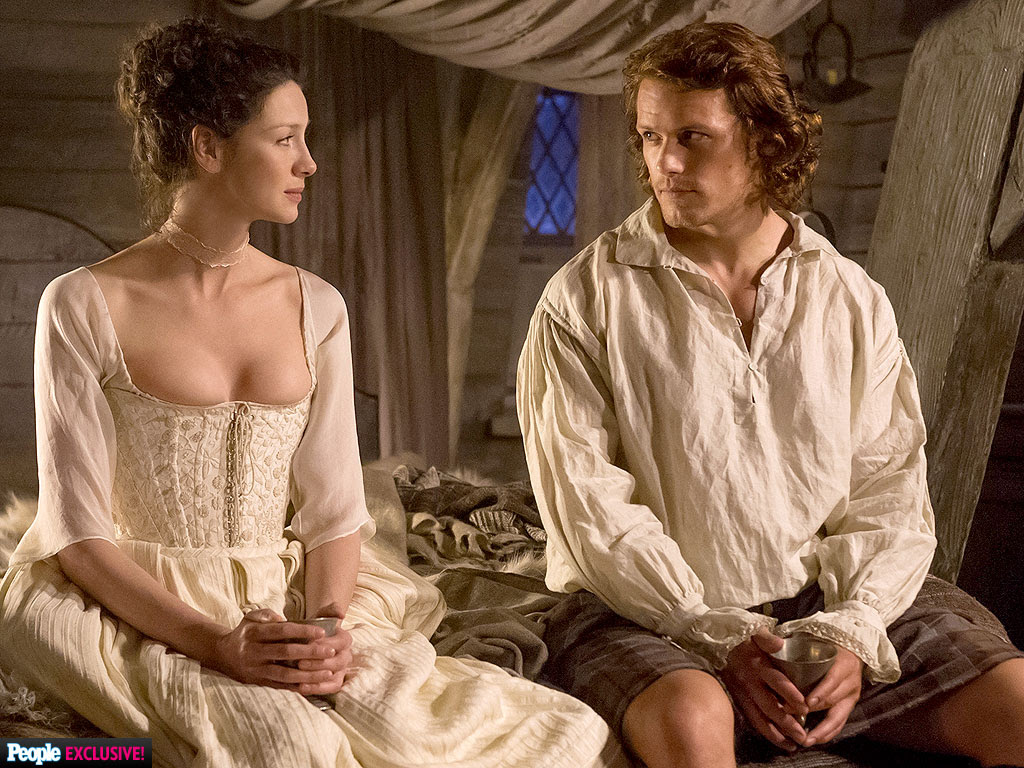 However, that episode was not my favorite.  My favorite was Episode 111, "The Devil's Mark," where Jamie rescues Claire from being burned at the stake for being a witch.  It is in this episode where she confesses to him that she is from the future and I love his comment after her lengthy explanation, saying “Aye, I believe ye, Sassenach. But it would ha’ been a good deal easier, if ye’d only been a witch.” 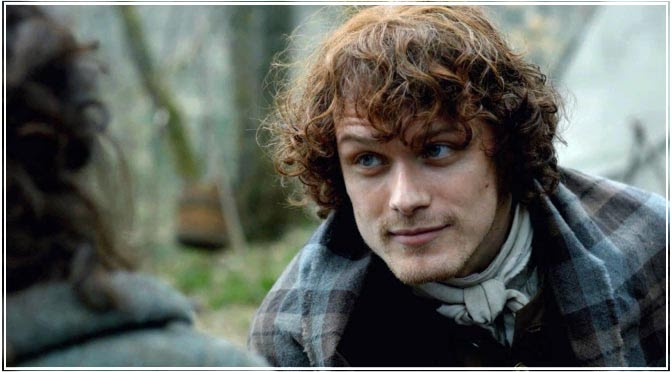 But after that they ride for a couple of days and, not realizing where they are going, Claire is surprised when he returns her to the standing stones where she first passed through from 1945. He tells her he is letting her return to Frank and "her time," and that there is nothing in this time period for her.  After their tearful goodbye, he says he will stay in camp until he knows she has gone safely, to make sure she is not again captured by the British.  After a long time, she leaves the stones and returns to Jamie, having made her choice. This is where, for me, the story really turns because she has admitted how much she loves him and all the rest is gravy...with lots of blood and gore and adventure thrown in.

The torture with Black Jack at Wentworth prison is coming up soon. 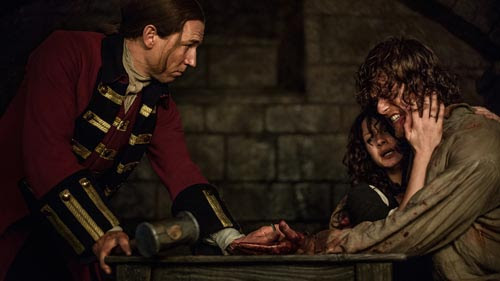 Lovers of the books have been waiting for this for so long and it's wonderful that it does not disappoint.  Congratulations to STARZ not only for making it, but for having the guts to make it right. Midway through the first half of Season 1, STARZ gave the go-ahead for Season 2, which will be quite different from Season 1, since it starts in 1968 with Claire telling Brianna, her daughter (sired by Jamie, who does not know that Frank Randall is not her real father) the whole story, so most of the story takes place in flash back to their time in France, trying to squash the Jacobite Rebellion. Lots of new stuff ahead.

Email ThisBlogThis!Share to TwitterShare to FacebookShare to Pinterest
Labels: Outlander

I finally finished the series this morning and have successfully avoided this post until then, even though I read the first book and knew what was going to happen, it's been awhile and I wanted to be "surprised". I really did like this series quite a bit, I haven't read the rest of the books so I have no idea what happens next.