Oh to be in Gdansk

Supposedly, today was the hottest day of our heat wave.  Supposed to get up to as high as 111⁰ though it didn't quite get that high here.  But I hadn't been to Atria in several days and went today.  As I left the building, I glanced at the outdoor thermometer and saw that it was about 101-102.  When I got into the car and turned on the radio, a guy sitting in a recording studio in Sacramento had just finished playing a piece by some Polish composer and was saying that the forecast for Gdansk, Poland was 57⁰.  He then said "Oh to be in Gdansk!"  He said what I was feeling too.

I can't remember when I was last at Atria, but its been at least 4 days.  I hadn't planned it that way, but when the temperatures were so hot, Walt couldn't bike around town.  I didn't want to run the risk of him collapsing from heat exhaustion somewhere downtown, so he has been taking the car.  Which left me without transportation, since we only have one car.

In all honesty, in this heat I was delighted to have an excuse not to go to Atria!

I felt guilty, though, because my mother seems to have stopped answering her phone and though I called her several times to explain why I wasn't there, she never answered.

I knew she was fine, but daughter guilt just kicked in.

But when I talked with Jeri on Sunday, she said she had also tried to all her grandmother and never got an answer and wondered when would be a good time to call.  Not knowing what her so-called "schedule" is in the memory care unit, I couldn't tell her, but I told her to pick a day and time and I would be sure to be there to make sure she was there and that she would answer the phone.

And so, out into the cauldron that is Davis this week I went.

I prayed there would be parking in the Atria lot and I found out that 3 p.m. on a hot, hot summer day is the perfect time to find a spot.  There was not one, but three vacant spots.  Nobody wants to visit grandma in this heat!  First hurdle conquered.

She was not in the common room when I passed by, though I noticed that the strains of "Ah leave me not to pine" from Pirates of Penzance wafted after me as I went down the hall to her room. (When I returned an hour later, I could see the video of Pirates playing and they were in the early scenes, where Frederick is asking the young ladies "oh is there not one maiden here....?" so apparently they had run through the operetta the first time and then put it on again.

From the looks on the faces/bodies of the "audience" in the common room, I doubt that anybody noticed.

[Aside:  The common area is not the place to show someone who has a loved one who still has a mentis they are compus with.  It is like a scene out of One Flew Over the Cuckoo's Nest and every time I pass by I think "She's not that bad, is she?"  But every time I see her there with the rest of the slouching, slack-jawed old folks staring off into space, I realize she looks just like all the rest of them.  I wonder what they are like when they are back in their rooms visiting with their kids...]

Jeri said she would call at 3:30 and I got to the apartment at 3 and texted Jeri that I was there and that her grandmother was there.

At 3:30 on the dot she called, and, as I suspected, my mother didn't know what the noise was or what to do.  She did pick up the phone and they had a nice conversation.  Jeri, evil child she, when my mother told her that I was there visiting, asked her if I was going dancing tonight. 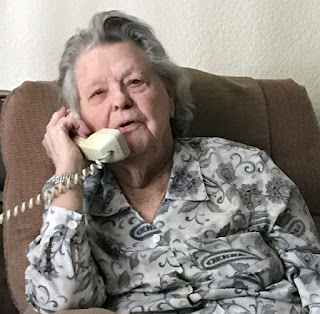 But Jeri was pleased and suggested that we do it every week, which I think will be a fun thing to do.  Hopefully by next week, it won't be so damn hot.  It is scheduled to "cool down" to 97⁰ on Saturday before going up into triple digits again next week.  Amazing to think of 97 as "cooling down".

But there was a very good thing that happened today.  As I said, I had not been at Atria for three days, and sat home feeling guilty for feeling relieved that I couldn't get there.  But, unlike other times, she didn't seem to have a clue that it had been 3 days, so I'm going to start giving myself permission to skip a couple of days and not go over there nearly every day.

Her roommate, Marge, walked in while we were talking.  I've seen Marge a few times and I have yet to understand a word she says.  She rattles on about something that is important to her, but her thoughts never make any sense and she eventually just kind of turns and leaves.  The aides tell me that she and my mother are good friends.  I don't know about that. After she left, my mother said "who is that woman?"

However, today she knew Fred and talked about him a lot, how much she missed him, how much fun they had together when they were married, etc.  It's nice that every now and then she can have those memories back again.
Posted by Bev Sykes at 12:44 AM

Email ThisBlogThis!Share to TwitterShare to FacebookShare to Pinterest
Labels: My Mother, telephone

John's dad was the same - he didn't know what the noise was when his phone range. When we were out of town and John wanted to call him, he (John) would first call the nurses' station to alert someone to go to Ed's room. Then John would call, the nurse would answer, and put Ed on the phone. That worked - at least for a while. Hugs!

Ufortuately, in my mother's case, I'm the "nurse." You can't really call the aids in the memory unit.