Walt and I are fans of the PBS show, Check Please, Bay Area, hosted by wine educator Leslie Sbrocco.  It is a show where three people share their favorite restaurants and all three check out all three restaurants and then appear on the show to discuss them.  We don't watch the show regularly, but catch it when we can.

We wanted to see the show that was aired this past week because it featured the restaurant Don Giovanni, in Napa.  It is Char's favorite wine region restaurant and we had hoped to take Caroline there, but time got away from us.  We remember eating there once and we always enjoy the Check Please crew discussing restaurants where we have eaten.

(99% of the time even with restaurants that sound really good, we never visit them, so I suppose watching this show is our way of living vicariously.)

Each show features three restaurants and one of the others on the Don Giovanni show was El Molino Central, a little hole in the wall place in Boyes Hot Springs, which the woman who recommended it (and the other panelists) said had the best Mexican food they had ever tasted.

While I marked this as a place I would really like to go should ever find ourselves in the area, it was "Boyes Hot Springs" that mostly interested me.  It's unlikely we will be there any time soon.  The last time I remember being there was in May of 1996, the week David died, when we attended the wedding of our Malaysian "son," Vince, who lived with us for three years.

It was a weird wedding because we were, understandably, all emotional and still in shock.  We were seated at a big table with one other couple.  The table was near the door and every so often one or two of us would leave and go outside, cry, and then come back inside.  At one point all six of us, along with Vince, were standing in a circle all crying.  We finally had to let the poor couple at the table know what was going on.

However, prior to Vince's wedding I don't think I had been there since I was a child.

Boyes Hot Springs was where our family went for three or four years on vacation.  We stayed at Sunnyside Cottages, a collection of six little cottages owned by the Ratto family, where people would come from San Francisco and spend a couple of weeks.  I know that the first year we went was the year I was 6 or 7 because that was the year my mother finally had my Shirley Temple curls cut off.  It was so emotional for her, that she had to leave while it was done and didn't come back until the curls were all gone.

I don't really remember what our cottage looked like, but I do remember that it did not have a refrigerator--it had an ice box and the ice man would come (daily? weekly?) and deliver a big block of ice that we used to keep food cold.  I guess we must have had a kitchen that my mother cooked in, but I don't remember that.

One of my strong memories was a Sunday morning when my mother was getting us ready to go to Mass and dressed my little sister in some frilly dress and let her wander outside while she finished her own dressing.  When she got outside, Karen was sitting on the ground pouring dirt over her head.

My strongest memory is when my mother and a couple of other women went berry picking on the hill across the road and stepped in a hornet's nest.  The other women ran down the hill to the creek but my mother was determined not to lose the berries she had picked and climbed up the hill, hornets following her.  She proudly said that she didn't lose a berry, though she had lots of stings for her effort!  I remember that she had a scarf tied around her head and when she undid the scarf, two hornets few out.

My father built a portable swimming pool to bring to the cottages one year.  It was built of wood, with seats at each end, and had a waterproof tarp tied to the sides, so we could fill it with water and at least cool off by sitting in cool water.

The main attraction of the area was the hot springs.  I remember it as being huge, which may be because I was so young, but the main pool was Olympic size and my father taught me to swim in the shallow end and by the time we stopped going to Boyes Hot Springs, I was shaking in terror at the top of the high dive trying to get the courage to jump off (I used to think of that when I watched my kids diving off the high diving board when they were on the diving team)

There was also a warmer pool, but I don't remember that one well.  However, I do remember the hot spa, with the steam rising off the water, and people sitting around in it enjoying the hot water.  I also remember that the wooden floor always felt a little slimy under my feet.  I didn't spend a lot of time in that pool.

There was a large snack bar area at one end of the Olympic pool and music played all the time.  Whenever I hear a recording of Nat King Cole singing "Mona Lisa," I am immediately drawn back to that snack bar and buying rainbow taffy.

In doing research to write this, I found an article written by the daughter of the folks who built Sunnyside Cottages, talking about her memories of the families who came from San Francisco to spend vacations there.  I couldn't help it.  I sent her an e-mail.  There is nobody in my life who remembers those days now and it was nice to find someone out there who does. 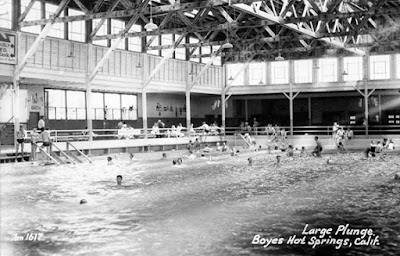