Why I'm a Lousy Writer

Oh, I'm not really a lousy writer. I can, on occasion, be quite good. But I remember when I started this little experiment in journal writing nearly 12 years ago. My goal was to learn how to become Erma Bombeck. In 12 years of writing what amounts to a daily Bombeck-length column, I still have never risen to what I consider the level of her most boring column.

HTML clipboardI just finished reading a book by emmy-award winning television writer Merrill Markoe called "What the Dogs have Taught Me and Other Amazing Things I've Learned." She is my new hero. First, because I'm not entirely certain that we aren't twins separated at birth, if she weren't five years younger than I am, but mostly because while we live quite different lives, our reactions to situations are so similar (and her closets look a lot like my closets!)

Her conversations with her dogs are particularly wonderful, and every single one of them is a conversation I wish I had had with MY dogs. About why all three of them feel the need to accompany me everywhere all day long, for example. Only she devotes a whole chapter to it. A delightful chapter.

Anyway, the reason this leads me to the belief that I am a lousy writer is that she gets her material from the things around her. She took a course in being a dominatrix because it was the only one available, she interviewed Fabio, she learned how to use a stun gun for an article she was writing, etc. And each of these essays is rich with descriptions. Descriptions of her surroundings, of the odd people there, of the normal people doing odd things and odd people doing odd things, of the instructors (if such there be)...all told with such a richness of language that you just want to roll around in it and hope that some of it sticks to you. 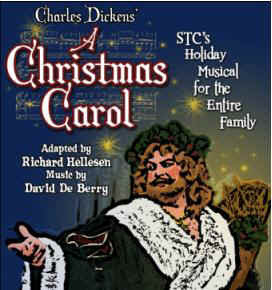 But where was I reading this book today? I was reading it while sitting in the audience waiting for the start of today's Christmas play, A Christmas Carol (because I didn't get enough of that story last night!), I was totally engrossed in my book, and wishing that I could write like Merrill Markoe while in front of my nose a whole class or two of high school students from a school in the foothills came in to see the show. They had arrived, some of them, in a very, very long stretch limo, which I noticed when we got to the theate, because it was parked in the patio of the theater complex.

I barely glanced at the students all dressed to the 9s, the boys in tuxedos, the girls in formal attire, most of them wearing wrist corsages the size of bridesmaids' bouquets. But I didn't hang around to watch what was going on, I went into the theater, one of the first half dozen or so people entering, and I sat there so engrossed in this book by a woman who makes her living noticing things and wishing I had her gift of composition, and I didn't notice the students until one, wearing a very short sparkly net skirt poofed out so far it was almost a long tutu walked in front of me and nearly brushed my nose with the skirt as she passed by.

It suddenly occurred to me that if I really wanted to learn how to write like Merrill Markoe, I would have been better off shutting the book and just looking around me, absorbing all the details. The room was full of interesting people doing interesting things and I never even looked up from my book. Sadly, by the time I made this observation, the lights were going down and director Michael Laun was making his opening remarks to the audience.

The show was, as I knew it would be, quite good and I was too intent on getting out of the theater as quickly as possible after the lights came up so as not to embarrass myself by showing the effects of my tears on my face. I am a sucker for schlocky sentimentality, but it's hell on my face afterwards!

I've now finished the book. Maybe next time I'm in a public place, I'll think to look around me instead of going off in a corner to read. (But I doubt it.) It's probably too late for me to become another Erma Bombeck anyway.
Posted by Bev Sykes at 12:02 AM

Email ThisBlogThis!Share to TwitterShare to FacebookShare to Pinterest
Labels: writing

I enjoy your blog. I wish I could write something every day but I can't. I have to be in the mood to write my blog.
Merrill Markoe sounds like my type of writer or maybe her book chapters have really nifty names. The chapters sound interesting.
I remember many years ago hat Jack Douglas ( of Jack Douglas and Reiko) had a chapter in his book called, "Never kiss a naked bus driver."
Hmmm!

Is that the Jack Douglas who wrote "My Brother is an Only Child?"