We Almost Saw the Giraffe

Well, that's not really true. We did see the giraffes. But not much else.

Walt called Tom this morning to see what was going on. Laurel had gone back to work, Ned and Marta were headed back to Sacramento, and Lacie was going to be with the babysitter, so it was just Tom and Jeri with Bri and they suggested we go to the Santa Barbara zoo, which I have never visited (Walt has).

By the time we got ourselves up, showered and dressed and got to Tom's house, said goodbye to Ned & Marta, got Bri dressed and ready and got on the road, it was about 11 a.m.

Normally this wouldn't be a problem. The zoo doesn't open until 11 anyway. But the zoo is a 20-25 minute drive from Tom's house and we had plans to have lunch with our friends Dick and Gerry, who live near Tom, at 1 p.m.. That meant that under the best of conditions, we would have 30 minutes for the zoo (though Tom and Jeri could stay as long as they wanted, of course).

Walt dropped me off at the parking lot (which was full) and I walked to the ticket line (which was long) while he went to find a place to park. He arrived, with Tom, Jeri and Bri and we all stood in line and waited. And waited.

Finally we had tickets and entered. I mostly wanted to see the giraffes, which you can feed, for a price. They are apparently part of the grand finale, so in order to see them first, Tom set off in the opposite way to how you are supposed to go.

Shortly afterwards, we saw lions. Sort of. One female lying in the sun appearing not to breathe, until she finally took one deep breath. Near her was the paw of what they assured me was a male lion. All I saw was his paw.

But next to them was the giraffe enclosure, with one giraffe looking out to the ocean. 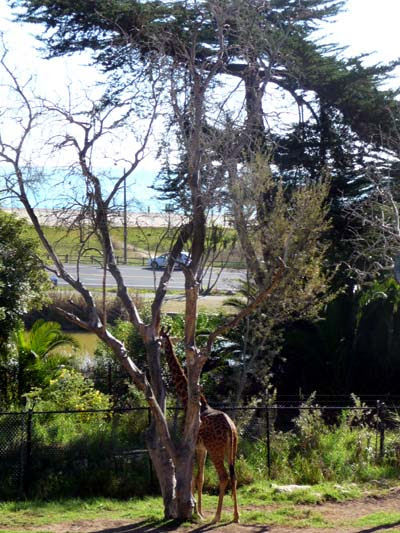 We saw the feeding platform and a long line of people waiting to feed the giraffes. 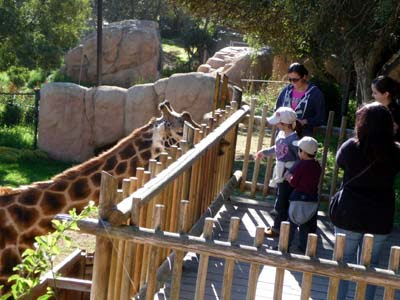 Obviously, there was no way we could get onto the platform and get to Dick and Gerry's in time, so we scratched that plan. We had a quick look at the one meerkat that was out... 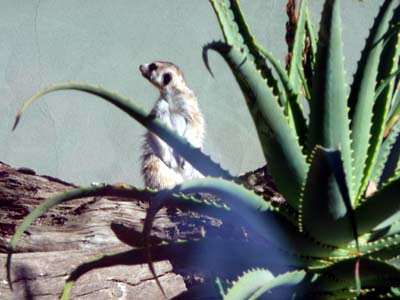 ...and then Walt and I had to to leave. He went ahead to get the car, I made my way down the hill, stopping for water and a pit stop, where I found the real zoo--five mothers, each with 3 small children, all trying to pee in the women's room. The lions, sleeping in the sun had it much better off!

We were only 10 minutes late getting to Dick and Gerry's and had a lovely lunch, catching up on news and Gerry's recent trip to Ireland. She was happy for an excuse to use her Christmas finery one more time. 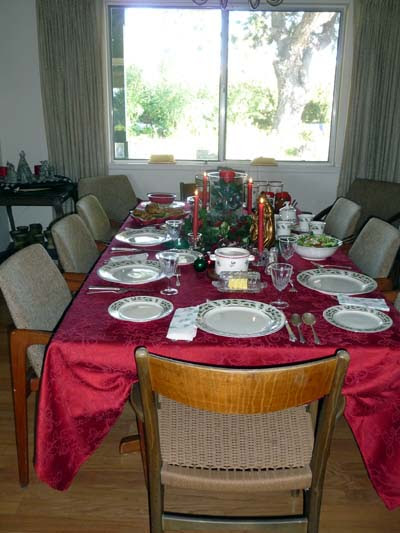 We finished the day at the Tupelo Cafe in downtown Santa Barbara where we had such a fun evening with Joe, Alice Nan and Jeri. Food was reasonable, but this is a $15 crab cake. 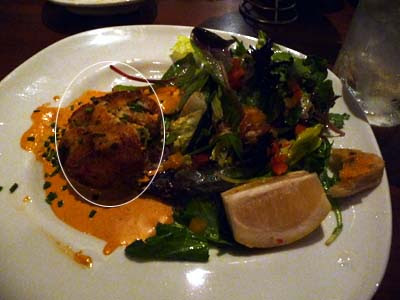 (note the size in comparison to the lemon slice). Fortunately it was absolutely delicious and almost worth that much money!