Last night we went to help our friend Ellen celebrate her "as of Monday I will no longer be in my 60s" birthday party. This is Ellen of "Ellen and Shelly," who have not appeared in this journal for awhile.

What a fun party. And unusual for me, because not only did I not bake the birthday cake (the last cake I baked for them was their wedding cake...the second of 2 wedding cakes I baked for them...but they are finally really, legally married, so I never have to do that again!).

We didn't know most of the people there, though my old hairdresser, Robbie, was there, and I felt guilty because I haven't been to him in several years. We also saw Norb, whose path we seem to cross quite often lately, and Melisssa, whom I see mostly on Facebook these days, and Pat, with whom I used to work the prize table at Gay Pride day, and haven't seen since that event ended about 3 or more years ago.

I brought my camera and didn't take a single picture of Ellen, Shelly, Ellen & Shelly, the food table or any of the guests. I was enjoying being "just a guest" until Ellen's son started cutting on a piece of paper.

I was totally enthralled watching this "thing" take shape and kept wondering if I should take pictures, but didn't until it was finished and people started gathering around and taking pictures. 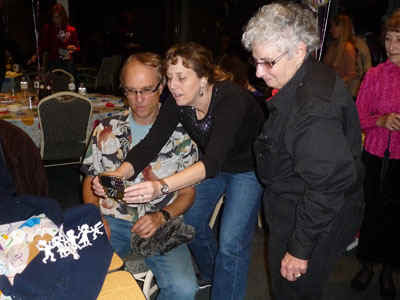 ...and then I couldn't help myself. (This is Ellen's son, her daughter, and Shelly) 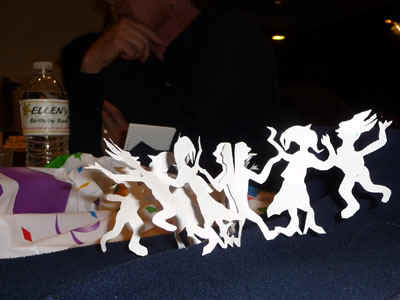 Amazing that this was all cut from a single sheet of folded paper! Also amazing that these are the only pictures I took that evening.

I was happy to have the chance to chat with Ellen's daughter, Laura, whom I have not seen since the big wedding. She sang a beautiful song to Ellen when the band started up. I remember Laura as being a wonderful actress when she was in high school with Jeri. I particularly remember her as Rosie in Bye Bye Birdie, when she danced with the Shriners in Act 2.

I had a long chat with Linda, who comments on some of my Facebook posts. We discussed dogs, specifically their new dog, Durango, whom they adopted from the SPCA this week. It reminds me of how strange it feels not to have fostered a single dog this year...but it also feels, I hate to admit it...good. Maybe now that Polly is part of the family, that phase of my life is finally over.

I also chatted for a long time with Denise and her friend (whose name I can't remember. Bad me). Denise adopted Capuccino, whom we fostered and then dog-sat. It was nice getting caught up on Cappy and realizing that Polly isn't the only dog with frustrating behavior problems. We agreed that it comes with the territory, but we love 'em anyway.

It was 9:30 when we left and only a few people left at the party. Shelly commented that they had rented the hall until midnight and I pointed out that renting a hall from 7 p.m. to midnight is probably NOT necessary when your guests are mostly of retirement age. 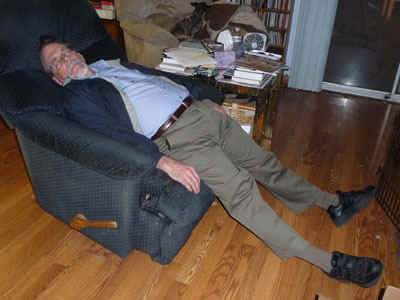 Today, rested and rarin' to go, Walt spent the morning working with Ned on Brianna's puppet theater and then shortly after noon he and I left to drive to San Francisco for our one Christmas party. We go to this party ever year. It is hosted by an old Lamplighter, Roger Pierson, and is always such fun because of all the decorations in his house. 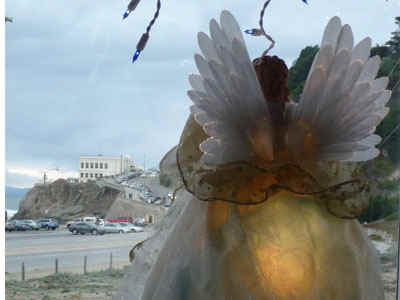 I love this angel, for example, with her twinkling wings, because she looks out at the ocean and, up the hill, the famous Cliff House. 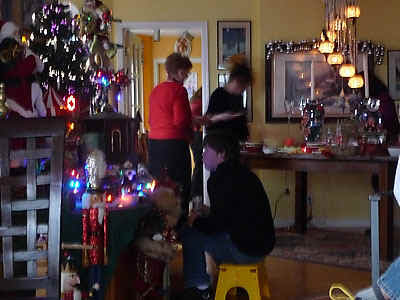 This is the third year we have watched Robert, the young man sitting on the stool, who is mentally challenged, watching in rapt attention the music box which shows scenes from The Nutcracker. It's his favorite ballet and he will sit there for a couple of hours during the party, just watching the scenes over and over again. 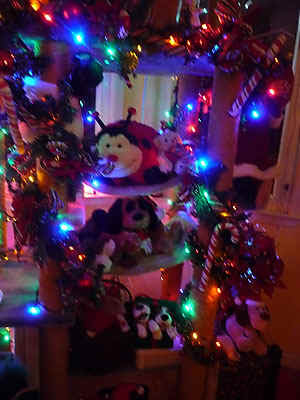 There is a cat tree which is filled with stuffed animals, some of which move or flash or make noise, but most of which are just there looking cute.

(Check the video of the day for a better look at Roger's lovely world, though the video does not do it justice.)

When we arrived the collection of guests was about half and half, Lamplighters and non-Lamplighters. I joined a Lamplighter in deep conversation with a Non-Lamplighter, a woman who decided that she was a theater expert and knew what the problem was with all the theaters in town.

I listened to her smugly talk about how the Lamplighters was a closed organization and that it was impossible for newcomers to get in, how the audiences were growing older and dying off and how Pocket Opera was also a clique. None of this is true, of course and it turns out she is not an actress, nor a singer, she has never auditioned for any of these companies, but she knows how to fix them all -- by doing expensive royalty shows that will bring in greater audiences.

My contribution to the conversation, other than biting my tongue and letting the other person handle the comments, was to point out that I am a critic, and that I review theaters which DO do the expensive royalty shows and how this year I saw the largest number of empty seats that I have ever seen. I then got up to go and get some food, and she was gone when I got back. Fortunately.

Later, on request, Roger started the two trains that circle his Christmas tree, one of which has what looks like a Bah-Humbug Santa at the helm. 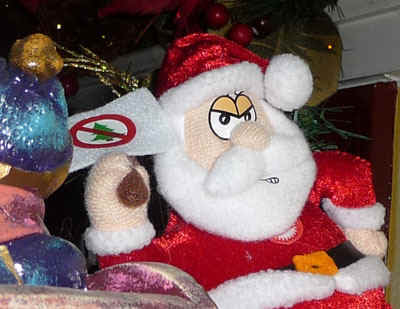 We left the party in time to drive home and see who won the $1 million on The Amazing Race. The best part was that when the 3 contestants had to type a note on an old manual typewriter and none of them knew what to do when the number "1" was not on the keyboard and they had to use the lower case "L," they way I learned it when I was learning typing! It took them all awhile to figure it out.

So our big social frenzy is over until Christmas. It was short, but sweet!
Posted by Bev Sykes at 12:02 AM