In Lieu of an Entry

I got all wrapped up in a book today (Michael Connelly's "Chasing the Dime") and didn't do anything but sit and read until I'd finished it.

So this seems as good a time as any to do another etagere shelf. Or shelves this time, since I'm choosing a few of the small shelves, which are easy (and short!) to describe. 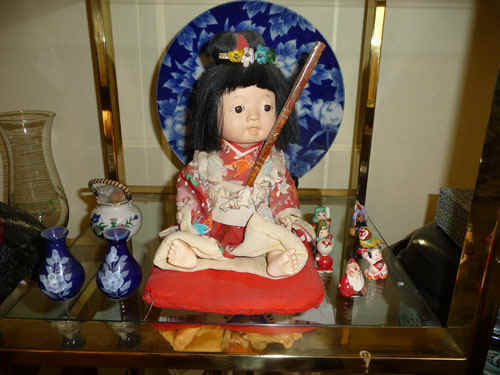 This is actually our "Chieko shelf." Chieko was an exchange student who came from Japan for 3 weeks around Christmas time in 1981, and then came back the next 3 Christmases. She always sent something if she wasn't going to be here. Going through putting away stuff today, I discovered, what I had forgotten, that there is a whole set of small dishes that match that big dish behind the doll, but they are in a cupboard. And I just love the little figurines on the right side. I don't think the one in front is supposed to represent Santa, but I always put him in front at Christmas because he looks like Santa. 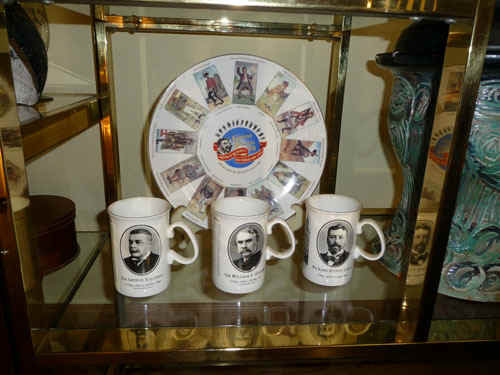 The Lamplighters once participated in an International Gilbert & Sullivan festival in Buxton, England. We went along (and took my mother). These were souvenirs that I picked up on the trip -- the souvenir plate, and cups with the pictures of (left to right): Arthur Sullivan, Willliam S. Gilbert, and Richard D'Oyly Carte, the guy who kept them from killing each other during their long collaboration.

It seems logical, then, to move on to "The Gilbert Shelf." 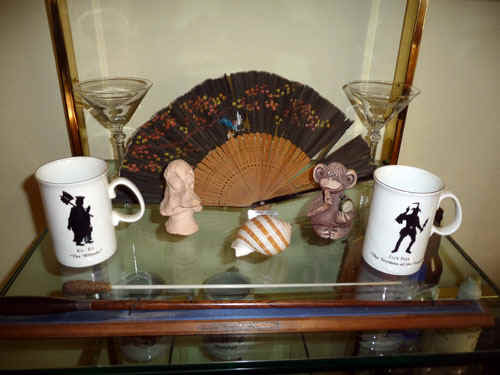 This shelf isn't entirely dedicated to my friend Gilbert. The two cups were 2 other cups I picked up in Buxton, one with a figure of KoKo from The Mikado and one of Jack Point in Yeomen of the Guard, the two roles for which Gilbert was best known. I don't remember why I have the martini glasses or the seashell, but the clay figure on the left was something that Paul made at the Art Center, here in town, when he went to visit the teacher of the ceramics class. She fired it for him and he was supposed to paint it, but he died before he could do it.

The fan in the back was a fan that Gilbert used during a production of The Mikado. It is really starting to fall apart now.

The Monkey is a little statue that I gave to Gilbert...I think (though I'm not sure) after the first show we wrote together, Major General Hospital, was such a success.

As for the batons, the wooden one in front, on that little raised platform, was said to have been used by Arthur Sullivan once. You can see where a plaque had once been mounted in the front. Someone gave it to Gilbert as a gift one time and I took it after he died. The white baton in back was Gilbert's own baton, which was used to conduct the orchestra at Gilbert's memorial service, and then given to me by Alan Harvey, who was the conductor for that service. 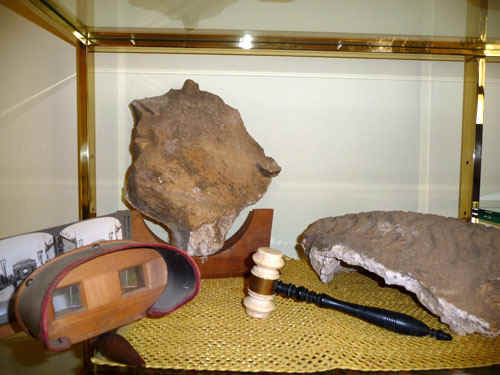 In 1915, after the opening of the Panama Canal, San Francisco held a huge world's fair, the Panama Pacific Exposition, which I believe lasted for a year. They filled in a lot of San Francisco Bay and built a lot of huge buildings for various expositions. One of the buildings which was the most beloved was the Palace of Fine Arts which, because everyone loved it so much, was allowed to remain standing after the other fair buildings were demolished and the land used to build houses on. But after more than 50 years, the building, which had only been planned to last a year, was falling apart and a wealthy philanthropist (are there "poor philanthropists"?) paid to have the thing rebuilt. They took the building down to the ground and built it up again, trying to match as carefully as possible, the original building.

The Panama Pacific Exposition had been one of Gilbert's passions and when they were tearing the old building apart, he picked up a couple of chunks of it in the rubble. The piece standing up is from the face of one of the figures standing at the top. I'm not sure where the other piece came from. He also had the stereopticon viewer and a bunch of slides from the fair. I chose to put the slide with the picture of the Palace of Fine Arts in it. 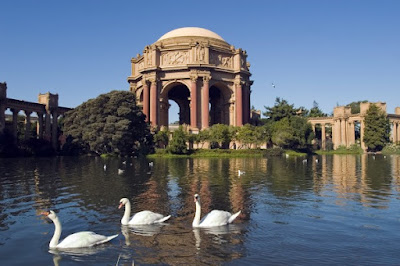 The Palace of Fine Arts in all its restored glory

As for the gavel in the middle, that has nothing to do with either Gilbert or the Fair, it belonged to my godmother's brother, who was some relative of my father's family--a cousin or something. He was Assistant Deputy Attorney of San Francisco, but died before I was born, so I never met him. However, the gavel was presented to him by Lodge #3 of the San Francisco Elks Club. I don't know the date. I guess that came from my father's stuff after he died.

you sure have some interesting pieces .