After reading my entry yesterday, Lisa wrote that I should explain what is on all of those shelves.

Well, that is overkill, to say the least, but I have long thought that I should have a record somewhere of what is what and why I have it, so perhaps over the coming weeks I can make that record here, a shelf at a time. Perhaps one a week or so. So let's start with the middle shelf on the left. This is the left side of it: 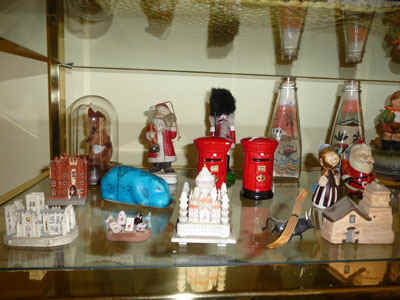 OK. Lets start with the back. There is a glass dome jar which Walt's mother once bought for him so he could put his father's (or maybe grandfather's?) watch in it. He never did and I had a little kangaroo left over from the souvenirs I brought back from Australia, so the kangaroo now lives in the dome jar.

Next to that is a ceramic Santa. HTML clipboardIt's a Christmas ornament which Walt's mother gave to us in 1985 (the date is printed on it). Santa has a camera around his neck and a boombox up to his ear. I also presume that the Beefeater is from England, and something else Walt's mother gave us after one of her trips. The two bottles next to him are sand art from Brasil. I think that Ned brought one home from his year there and a Brasilian guest brought the other. Or perhaps guests brought both. Pretty amazing stuff, anyway.

In the middle on the left is a little figure of the entrance to Hampton Court, Henry VIII's former home. I bought that when we visited Hampton Court with my CompuServe friends. Next to that is a blue hippo that I bought at the Metropolitan Museum of Art in New York. And then there is a set of salt and pepper shakers that I bought in England somewhere. Sadly, I can't use them for their original purpose because one is cracked at the top.

To the right of the shakers is my little Viking that I bought in York. I saw it the first time we were there but didn't buy it and always regretted it, so when we went back the second time I remembered where the shop was and found it still on the some shelf and bought it. You can see it better in the next picture. Next to him is a Chinese Santa which Walt's mother brought back from a trip to China.

In the front, on the left, is a model of the York Minster, which I also bought in York because I wanted to remember the glorious evening we spent listening to the choir rehearse Christmas music.

Next to that is a little thing that I think someone gave me...it represents all the people who have lived with us.

Then there is a little Taj Majal which Walt's mother brought to us from India, followed by a tiny little black bull on a ribbon, which was attached to some bottle of beer that one of our foreign guests brought. I think it was someone from Chile. and finally there is a little adobe church which I think also came from one of the guests, thought I'm not sure about that.

The right side of that shelf is here: 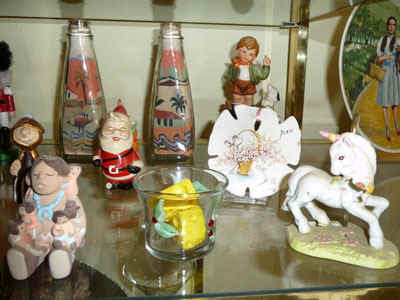 You can see the sand art better, and also get a look at the Viking and Chinese Santa. The boy at the back was a gift from my friend Pat. It is a music box and plays "The Happy Wanderer." I don't remember where that white shell-like thing with my name on it came from, but since it has my name on it, it made the cut.

In front on the left is one of those Pueblo story teller figures. I bought that somewhere, but I don't remember where--I always wanted one because it reminded me of me, always covered with children. They are usually quite expensive, but this one was reasonably priced, so I was happy to buy it.

Next to her is a decorated glass votive candle holder filled with two Wisconsin cheesehead erasers. Don't ask me why!

And finally there is my favorite thing on my shelf, a delicate little unicorn figurine that broke once. Jeri painstakingly put it back together again. I love it because of the care that she put into getting it as right as she could

So there you have it. Shelf 1. I will do more later, but not right away. As you can see, my tsatskes are all cheap trinkets, but they have meaning to me. 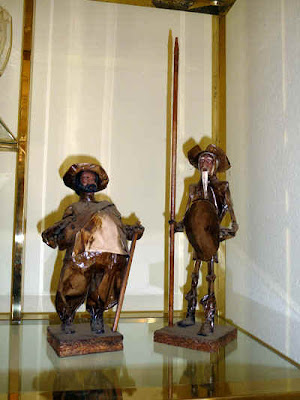 This doesn't take much explanation.
They are papier mâché figurines which my friend Olivia
brought back from Mexico for me.
They have their own shelf.

I saw the hummel on your shelf my mother used to collect those until the price went sky high on them .

Actually, it's a music box and a faux Hummel. I have a friend whose mother collected them for years when my friend was little. I remember she had a lot of them.