This is an entry inspired by Sherck of "Where's My Plan?"

What would Christmas be without music? Not only the tunes we love, the tunes we hate, but the whole thing--elevator music, mall music, sing-alongs, etc. Here are some of the musical memories that are special to me (for good or bad reasons!)

We carried that tradition into our family when we began to have children. We didn't often play music throughout the day, but there was always Christmas music when we trimmed the tree. It always started with the Bing Crosby recordings that I remembered from my youth. What it segued to may have changed, but Bing ruled Christmas. ("Silver Bells" was my favorite.) I also have a Mike Douglas recording that is not available on iTunes which I usually put on second. After the kids were older and Lawsuit had recorded its own Christmas song ("The Grassy Knoel"), included in an area Christmas CD, we had to play that first, followed by "The Santa Rumba."

Christmas choirs. I always sang in a choir, from grammar school through our move here to Davis. There were always Christmas concerts, and rehearsals for singing special music at Christmas Mass when I was in grammar school. To this day, I can't sing the traditional songs without automatically taking the alto line.

Caroling, caroling, caroling. I don't remember a lot of opportunities to take to the streets to serenade the neighborhood. The Lamplighters used to get on the cable car and ride the length of the route, from Market Street to Fisherman's Wharf, singing and laughing all the way. We were able to be part of that tradition only once, but I just loved it. There is nothing like singing choruses in public with a group of professional singers! When we got off the cable car at the end of the line, we were at the Buena Vista cafe, where legend says Irish Coffee was born. We would all pile into the place and squeeze into the elbow-to-elbow crowd and have a couple of Irish coffees, to take the cold of the cable car out of our bones.

The Davis Comic Opera Company, in its heyday, occasionally went out into the streets of Davis to sing and again, I loved singing with people who really knew how to sing. The last time I sang carols on the street was a few years ago when we went out with Ned and Marta and Marta's family. I had forgotten how much fun it was.

The fun of playing Christmas carols on the kazoo! 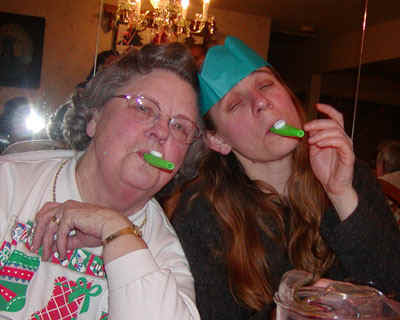 Rest Homes. Throughout my life at various times I have been with groups that went out and serenaded people in convalescent hospitals. When I was in grammar school, especially the early years, all those old people terrified me. Later, here in Davis, various groups would assemble and go out and sing for the town's convalescent hospitals. The last time I was part of that group, it was organized by the amazing Cathy Speck (who is living with ALS) and her wife, Linda Duval. I remember we were singing at one rest home in one hall while in another hall we could hear another choir singing competing Christmas carols.

The Nutcracker. A lot of people in this town have the high school Madrigal Choir dinner as their favorite holiday memory, an old fashioned dinner with songs provided (and food served) by the award-winning Madrigal Choir, in their fancy costumes. We did go to a Mads dinner one time, but our kids didn't do Mads, they did Jazz Choir, which had no Christmas tradition. But our kids performed in, helped with, and designed and built for the annual Davis Children's Nutcracker, and we went to all the performances they were in and probably saw a few of the productions they were involved with backstage. "The Dance of the Sugarplum Fairy" still takes me back, in my memory, to those days.

Egg Nog Gala. Of course, no Christmas musical memories would be complete without the Egg Nog Gala, the annual show the kids did for us after Christmas dinner. Whether it was singing Christmas songs, performing other songs or, especially, David's one-finger rendition of "Deck the Halls," those are such amazingly special memories.

A group of us standing around the grave of David and Paul (their ashes are buried in the same plot), onto which I have arranged a small Christmas tree, passing around a flask of Jim Beam and singing Christmas carols, while we shiver in the cold, and maybe brush away a tear at another Christmas without them.

Mall Music. I don't shop malls much any more, but I did love wandering through stores at this time of year with all the elevator-type music playing, occasionally coming to a group that is all dressed up and singing. It just add another little layer of civility to an otherwise ruthless process! Unless, of course, the song is Feliz Navidad, which is my least favorite Christmas song and makes me want to run screaming from the room.

My final Christmas music memory doesn't involve Christmas music at all. It was the last Christmas we spent with my father, which I've mentioned here a few times. My father and I didn't usually get along, but each year we would go to his house and clean it up for him as a Christmas gift. The previous year he had been so drunk, he couldn't walk straight or remember his grandchildren's names. This year he was sober and though his health was failing, he sat down to show Jeri something on the piano. What evolved was a full-scale jam session involving all the kids. Music had been my father's whole life and this was the happiest I'd seen him in a very long time, discovering that his grandchildren shared the love for music that he had--and didn't believe that they did. I even had a video camera with me to record it in a not-very good video, but enough to bring back the memory. He died the following July, so this was our last Christmas with him and after so many not-very-good Christmases, this was a real gift, to be able to remember that as the last time we were all together. 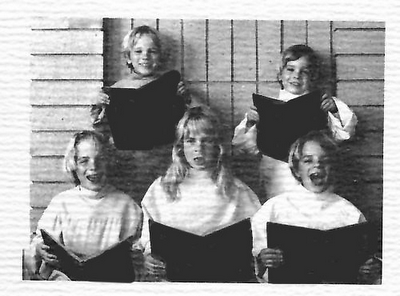 I don't have all the music memories you might have -- not growing up with Christmas in the family -- but I still sing the alto parts. Or the second violin part.