You would have thought that with the new Pergo all in and installed a couple of months ago that we would have quickly put back the furniture and all the stuff was in the living room.

It took awhile for Ned to have free time to help Walt move the furniture back in, but he did that the day they started working on the puppet stage for Brianna.

But even with the furniture back, we didn't exactly leap up instantly and move all those boxes back into the room and start putting all the tsatskes back on the shelves. In truth, we were enjoying the unusual stark, Ikea-like feeling of the room.

In fact, everything might still be in boxes in the guest bedroom but I suddenly realized several days ago that we are going to Santa Barbara for Christmas and that Ashley and her dogs are going to move in here. And at the moment there is no place for her to sleep, and you can hardly even walk through the bedroom, much less lie down (glass shelves rested on the bed). It brought a sense of urgency to the "put the stuff back" project.

I couldn't do anything until Walt moved all the glass shelves down and put them back in the Gilbert's etageres. That in itself was a monumental task, which involved moving nearly 20 heavy glass shelves down from upstairs, cleaning them off, and putting them back.

But when that was done, I started with the first box and returning stuff to the shelves. I plugged in my iPod and started listening to a new book as I worked. My idea was to throw away some stuff -- anything that I had no sentimental attachment to -- in the hope of reducing the clutter, somewhat.

I remembered when Walt started packing things up, I was very efficient and photographed all the shelves, to make it easier to put it all back when the time came. But when I checked my camera, I could not find those pictures, so I just started working away, box by box, hoping to approximate what had happened before. This was complicated by the fact that when we put the etageres in here originally in 1986, one of them was put in upside down and we didn't notice it until all the shelves were filled--it didn't really show, so we just left it. But now I wanted them both to be right side up, which changed the configuration of the shelves.

Anyway, I started working and was soon hopelessly lost. I knew what some shelves should look like, but I have so many little tsatskes that I couldn't remember. I took a break for lunch and drove Polly nuts. I was eating cottage cheese in the living room and Walt was eating his lunch in the kitchen and Polly kept racing back and forth between the two rooms, hoping for a treat from one of us (I don't think she got one for either of us.

I finally decided to take a break and see if I could find some pictures anywhere with a picture of the etagere, which would help me somewhat.

Well, kudos to me. Not only did I take pictures of the etagere shelves, but I actually made a special file on my computer to put them. 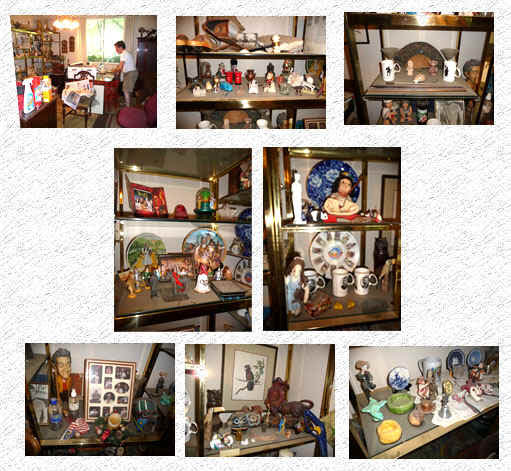 With the help of those pictures, which I copied onto my laptop and put in the living room as a guide, I was able to almost effortlessly put back all the stuff. 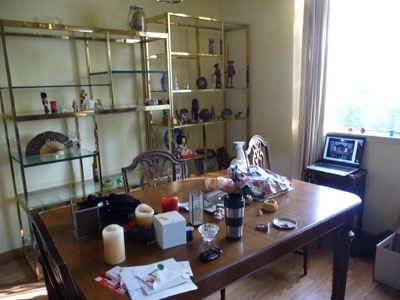 I got about 2/3 of it done before deciding to call it quits for the day. But the important part was done: Delicate Pooh was back on his perch on the top of the etagere. 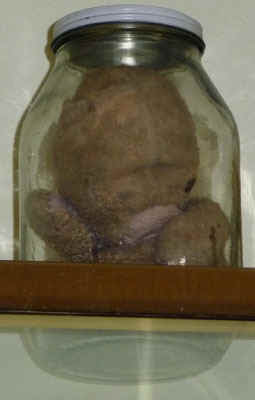 I still have a bit more to do tomorrow and then tackle the bookcases and all the junk that goes there, but it's staring to look more like it used to.

Oh. And I decided to keep the punch bowl after all. 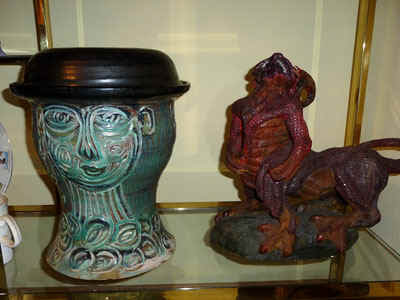 I need to get some SuperGlue so I can put the fruit back on her head. Oh, and that other sculpture is one of my uncle's monsters. We each got our pick of the work he left behind after he died.

(I should also add that I unpacked 6 of 9 bankers boxes and discarded the equivalent of half a box. Well...it's a start, at least!)
Posted by Bev Sykes at 12:02 AM

I don't even want to think about all the crap the girls are going to have to deal with sometime. Oh, well.....