Time for Another Shelf

Cookie baking has slowed down. I only made one batch today...couldn't get through the Christmas season without a bit of ginger, so I made some ginger snaps. I also filled up several small containers to give to people. I dropped one off at a neighbor's door (haven't heard from them), took some to my friend Joan and to "Jessica Moms Brown," who read I didn't know what I was going to do with all these cookies and kindly volunteered to take some off my hands! Two friends also stopped by and picked up cookies. Ned's sister-in-law picked up a big batch for her and her family and took a smaller package to her mother.

Finally, Ned stopped by and I sent him home with a container of cookies as well.

So this was a third cookie-centered day and when contemplating what to write tonight, I decided it was time to go back to the etagere shelves and write about another shelf. Believe it or not there is a bit of rhyme and/or reason to the placements of things on this shelf.

This is the left side: 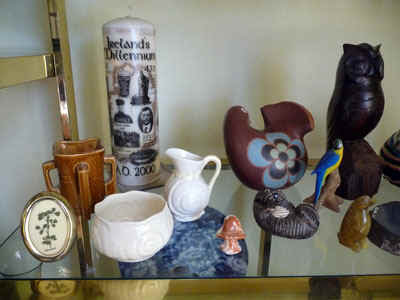 The shelf starts off in Ireland. There is a tall candle in the back which Walt's mother brought back for us. It represents Ireland's millennium. In front of that is a brown cup with four handles. I remember Walt's sister brought it to us from Ireland many, many years ago. In front of that is a shamrock in a frame. I bought that in Castlebar on our first trip to Ireland when we stayed in the tiny town of Mayo Abby. Castlebar, with a population of about 13,000, was the "big city" nearby.

Then you see the pitcher and the white bowl. Those are both Beleek pottery. Walt's mother's cousin Nora, who died this year, gave them to me on one of our trips to stay with her. Both had broken pieces, I believe, and I glued them together again. They are so delicate.

There is a ceramic mushroom made from the mud from, I think, Alaska. I'm not 100% certain that it was Alaska, but I think it was, when we visited Mike and Char when they were living there. To the right of the mushroom is a statue of an otter, which my friend Phil gave to me in the days when we were speaking to each other. I like it because it was one of only a very few things he ever gave me...also because otters are cute!

Behind the otter is a big round ceramic bird. I'm not sure what kind of a bird it is, but it was given to me by a guy from Chili, as was the tiny green marble penguin in the front of the shelf.

I can't remember where I got the parrot on the tree, but have a feeling it came from Brasil.

The big black wooden statue in the back came from one of the kids--I think it was Paul, but I could be wrong. It's the Maltese Falcon.

The other half of the shelf is this: 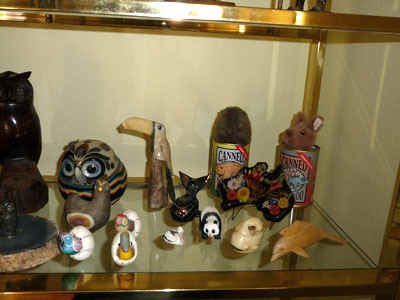 I'm not 100% certain where some of these things came from. There is the Maltese Falcon again in front of which is an owl on a slab of polished rock, which came from Brasil. I love the little collection of birds in eggs, which also came from Brasil, I think (but I could be wrong). The grey bird behind those was from one of our Japanese girls and the big owl in the back came from Chili. The toucan also came from Chili, I think. These were all gifts from our foreign students, but we had so many from So. America it's difficult to keep track of which visitor brought which gift.

Next is the sea life collection. In front of the toucan is a beautiful glass whale that I bought on the Big Island in Hawaii. It was made from black sand. We had just been to South Point beach with Marta's mother and step-father and watched a mother and baby whale cavorting off shore and I wanted a statue to remember that event. In front of that is a tiny pelican which I bought in Australia after we had watched the feeding of a bunch of pelicans in Kilbarri Park.

There is a panda that I bought at the San Diego zoo after seeing Hua Mei, the young panda whom I had been watching on "panda cam" ever since she was born. Next to her is a whale netsuke box I bought on Friday Island in Puget Sound after my friend Diane and I had nearly drowned on a whale watching boat. The top part of the whale comes off and there is a teeny tiny statue of Jonah inside.

Next to the netsuke box is a wooden dolphin mother and baby which Peggy bought for me in the small town of Denham, after we had been to Monkey Mia to see the wild dolphins swim in to get their fishy treats.

Behind that is a touristy thing that I bought at Hillary's Marina outside of Perth. It is in the shape of Australia and is filled with flowers of Australia. I had actually bought it for a friend, but liked it so much I kept it for myself.

Behind that are a canned wombat and a canned kangaroo which Peggy sent me for Christmas, two years in a row.

And there you have it -- another etagere shelf revealed!
Posted by Bev Sykes at 11:50 PM

Email ThisBlogThis!Share to TwitterShare to FacebookShare to Pinterest
Labels: etagere

Noah?? You sure that isn't Jonah?