Remember the eggs I said Jeri decorated for us, but which had all broken over the years? Well...they hadn't. A couple had, and some parts of others had broken, but Walt put them in a box in a drawer and I hadn't seen them for years. He brought them out today.

That is, from left to right Jack Point (Yeomen of the Guard), the Fairy Queen (Iolanthe), the Judge (Trial by Jury), Ralph Rackstraw (Pinafore), a what is either Josephine from Pinafore or Angelina from Trial by Jury, a Yeoman (Yeoman of the Guard), The Mikado, and Bunthorne (Patience). 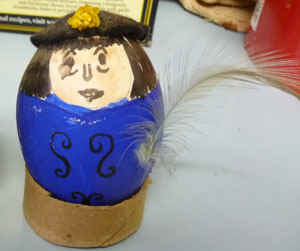 Because you can't really see Bunthorne's feather quill in the group picture, here is a better picture of the "fleshly poet."

I hadn't seen these eggs in years and I'm so glad Walt remembered were he put them. They are so fragile, I hardly wanted to touch them. They are still very special and still rank among the best gifts I ever received for Christmas.

And I guess they also qualify as "holiday decor."

We've never done a lot of decorating around here. Each year the whole family decorated the tree together, while drinking the first egg nog of the season and listening to Bing Crosby singing. The tree was always decorated with home made ornaments, and ornaments that had been bought special for the kids (like 49er ornaments for Tom and David, a ballerina ornament for Jeri, a golden coronet for Paul the year he first did Music Man, and a drum for Ned)

In later years we began to collect what I came to call "the necropsy ornaments" -- our dog Seymour's collar and her favorite tennis ball, a black leather jacket ornament we bought the year David died and the smiley face necklace Paul bought for me that was such a joke between us and which I first draped across the tree the year he died.

And then, of course, it wouldn't be Christmas without the Starship Enterprise Shuttlecraft, with Spock's voice wishing everyone happy holidays and to live long and prosper.

We put up the wooden stable that my father made when I was a child. It has only the Holy Family, a couple of donkeys and a sheep and then an angel that goes on the top. She's holding a sign that says gloria in excelsis and when Jeri learned to read she decided that was her name, so she has always been referred to as "Gloria."

At one time everyone had a personalized Christmas stocking, which I knitted with my own hands, believe it or not. And I once made a big wreath out of scraps of material from all sorts of outfits that the kids had worn. We hung that over the fireplace for several years until it began to look a little "worn." (I had forgotten that I used to be "crafty")

But the crowning glory were the Nunu lights. Walt started out with good intentions and put lights up around the outside of the house, but we have a big house and not all that many lights and they went up one side of the house and across half of the roof and that was it. He kept them up all year for several years, but only lit them at Christmas time. One year he had actually taken them down and we decided that since we had so few lights, we would just drape them decoratively across the shrub in front of our house. When he got it all done and the lights plugged in, the kids decided that if you looked at it right, it looked like it spelled "nunu." So they became known as the Nunu lights and were a great joke each year.

The year Paul died, I decided I couldn't handle putting the Nunu lights up again, so they have not gone up since 1999.

We don't decorate at all any more, other than putting the diminishing number of Christmas cards we receive in a basket that goes on the kitchen table. (Reminder to self: clear off the kitchen table.) Without any kids in the house, and with the house not in condition to "entertain" there didn't seem to be much point and with Paul and David gone, I fear that decorating a tree becomes a painful thing for me, which is why it's such a joy to be able to celebrate Christmas with the grandkids now.

It is a chance to renew what used to be the joy of Christmas, by watching the joy in Brianna's eyes, and, as she gets older, in Lacie's as well.

If it is any consolation I dont put up a tree and we dont have one either . My husband does not like christmas either he always says I like december 26th cause all the bs is over with . They were talking about putting up a tree at his store and he said he told em no he did not want any part of it . His christmases as a child stunk and he does not celebrate as an adult either .So I totally understand .