I have been fortunate to have met a few celebrities in my life. Some biggies like Judy Garland, Piper Laurie and Carol Channing, some lesser celebrities like Brian Childers, who did such a wonderful job of playing Danny Kaye off Broadway and Michelle Mays, whom I first saw in the Last Session and later went on to appear in Rock of Ages on Broadway.

It's fun meeting celebrities, even when someone just points them out to you, like Steve Schalchlin did at opening night of Jim Brochu's Zero Hour, pointing me to Marge Champion, Robert Osborne and Theodore Bikel at the opening night party at Sardi's.

But there's nothing quite like meeting a local celebrity and actually sitting down and spending time with her.

And so yesterday I got to meet Joey, the 2-legged Chihuahua puppy. 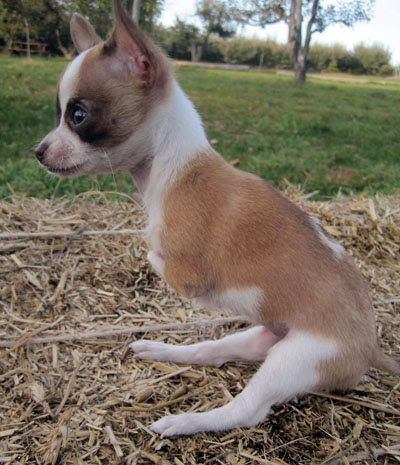 I've been reading about Joey for a few weeks now. Though she looks like a Thalidimide baby, she is probably the result of inbreeding to produce smaller Chihuahuas and she was about to be euthanized by the breeder because she had no front legs, but ... I mean look at that face! ... Ashley rescued her and has been trying to find out how to help her.

She started becoming a celebrity when she appeared on the local news station. At that time, Ashley was hoping to raise enough money to have a special wagon built that would enable her to move around like a normal dog.

The TV story managed to raise enough money in a day, and a week later there was a follow-up story about her.

In the meantime, Ashley had contacted a company named Ortho Pets, based in Denver, which makes prosthetics for disabled dogs like this (little wheeled carts). The company offered to fit Joey for a cart and then adopt her out when she’s adapted to life on two legs. Joey will even get new carts and extras as she continues to grow.

The money raised from the television appeal would pay for Ashley's flight to Denver, so Joey wouldn't have to fly as baggage. Southwest charges an additional $75 fee to bring pets inside the plane, but they eventually agreed to waive the fee when they heard Joey's story.

Ashley has been telling me for days that I would have to meet Joey before she left, but somehow the time never was right, but, with her departure today imminent, Ashley brought her over for a meet and greet last night. 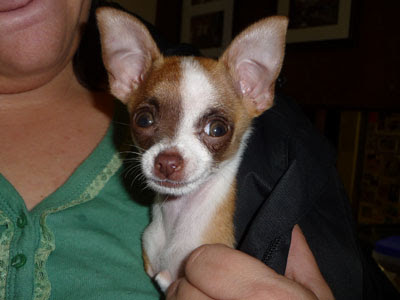 As I said, I have been seeing photos of her ever since Ashley took her in, but I was unprepared for how really tiny she is. Ifigured she was somewhere near Polly's size, but I think she's less than half her size. 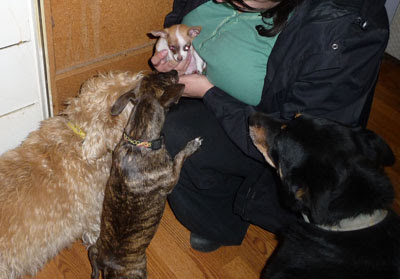 The dogs couldn't get enough of sniffing her, until Joey had her fill and retreated to Ashley's jacket sleeve, where she spends most of her time.

Today was the day she was leaving for Denver and a film crew from TLC (The Learning Channel) showed up at Ashley's house to get pictures of getting her ready for the flight, because Joey is going to be part of an upcoming feature of TLC's show about Southwest Airlines. 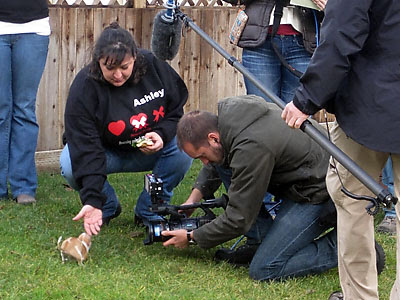 When they got to the airport, the "pupparazzi" was waiting for them (and will accompany them to Denver) 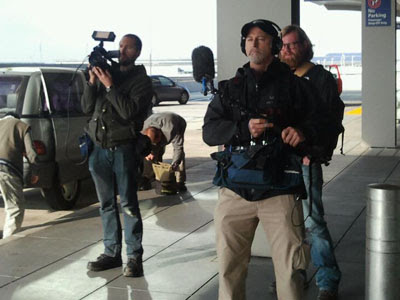 Joey seemed it to take it all in stride. 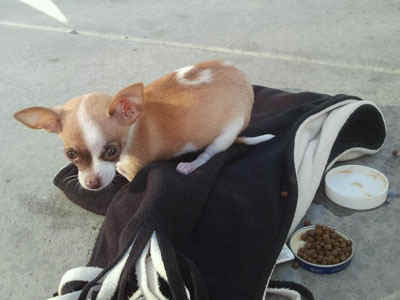 She instantly made friends with the Southwest crew...how could they not love her? 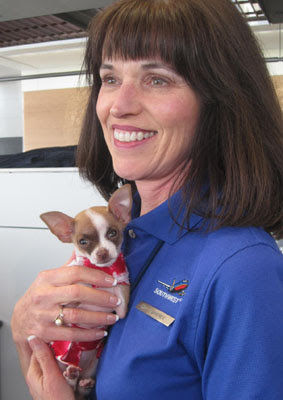 As I write this, Joey, Ashley, Stacy (from the SPCA) and the film crew are winging their way from Sacramento to Denver.

All of us who foster dogs grow to love them and it's difficult to give them up. Some are more difficult than others, and I know that Ashley is going to have a difficult time letting this little girl go, but she also knows that it has to be done.

I told Ashley last night that Joey had been saved for some reason and that I was sure that once she has become accustomed to her paraphernalia and is placed with the perfect family, she will somehow live out her destiny.

She evokes such love from every person she meets that she would make a great therapy dog for hospitalized people.

I know we haven't heard the last of this little girl, and I look forward to watching the TLC program when it is broadcast...and, more immediately, getting Ashley's report on how things are going in Denver, as Joey settles in. 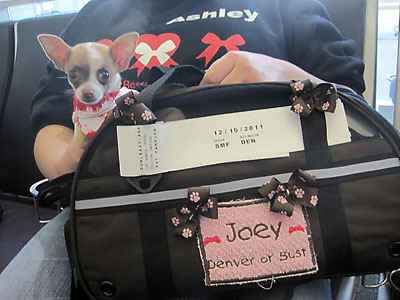 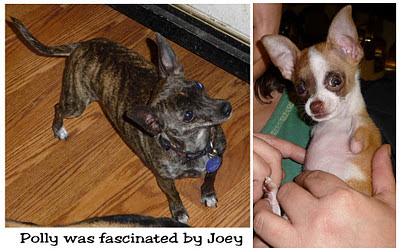 Is she not darling and being a chihuahua mama I love em . She is adorable and yeah how could you not love that face ? she ia adorable . Im so glad they are willing to help her . Good luck to her and hope it all works out .

Oh what a little doll! I'm so happy she's been given a second chance at life, and I'm glad you were able to meet her. Thanks for sharing her story and your pictures of her.