'Tis the Season for Excesses

Tiff wrote that she couldn't wait to hear the story of Delicate Pooh. I remembered that I couldn't link to it because that was one of the entries from 2000 which were lost at some point a couple of years ago, when GeoCities died. However, I am slowly getting them back on line again. This entry, which I hurriedly re-posted this afternoon, is missing some graphics and could be formatted better, but at least it tells the full story of Delicate Pooh.

Well...here we are on what I learned today is "Green Monday." Apparently this is the day when more people do their on line shopping, as distinguished from "Black Friday" because no crowds are involved and no pepper spray is involved.

As someone who doesn't do a lot of buying at this time of year, it has been interesting to kind of dispassionately assess the climate. We have politicians telling us that the most important thing is to buy-buy-buy because without our dollars all the businesses will go under. We have talking heads telling us that the economy is in the tubes, which leads me to wonder where all this money to buy-buy-buy is coming from.

And then we have the retailers, dangling the golden rings in front of our faces everywhere showing us stuff that we never knew existed before, but which we suddenly have to buy now because the price is such a bargain.

I have received at least one (sometimes more) mailing from Omaha Steaks every day since Thanksgiving, combined with e-mails and phone calls. Now I have to admit that I like Omaha steaks, but you really have to pay attention. The person who called me on the telephone to ask if I wanted to renew my gift to Phil (who is never able to come out here for Christmas, so I figure he could use a steak or two) and she seemed to emphasize the special sides that could be included. Well, I didn't pay close attention to what meat would be in the package and when I received the receipt, it appeared that I was paying about $5/lb for hamburgers and hotdogs, 2 steaks and those mouth-watering sides.

I called the company immediately and got the order canceled and figured that if I put together all of the hundreds of mailings and worked on it, I could work out getting the most first class meat for the least price, including free shipping.

Well, then I got a notice that Phil's package had shipped. (He has already received it) I was livid and called the company back again. After a lengthy conversation with the very nice lady, she agreed to refund my money for the package that had already shipped and I would order another one. I kept putting it off and putting it off and finally I was going to order on the last day when, behold, I received an e-mail from Omaha steaks that all of their packages were now 50% off. So I was able to put together such a good package for Phil that I got a second one for us. Mostly steak-type meat and just a couple of those cheap sides that end up being very expensive if you don't calculate the price.

I was very happy about that.

BUT, I am still inundated from all sorts of catalogs (time to re-up my "do not send" order). I guess the most expensive catalogs are ones that I don't get--like Neiman Marcus or Tiffany or other such stores, but I did get a Brookstone catalog today and was amazed at the things that you can spend the money that you don't have buying, which you didn't realize you needed until your catalog arrived. 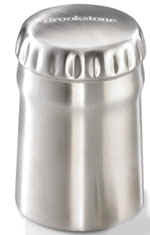 You can, for example, for a mere $20 buy this little gizmo which "removes bottle caps effortlessly."

Now, I don't know about YOU, but I never had any problem working a "church key" (why was it called a church key?) which you could usually get free in places if you looked for it. But now Brookstone will sell you this $20 gizmo (but if you buy two, it will only cost $35!).

How many out of work guys do you think want to plunk down $20 for this silly gadget...and how many idiots do you think will be intrigued by the fancy color and the fancy upscale catalog and buy it even though they can't afford it? 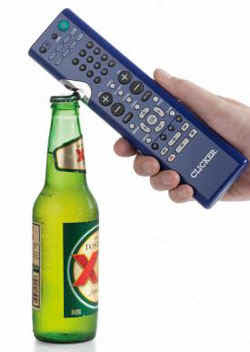 Now here's the perfect gift for the out-of-work guy who does nothing but lie around the house drinking beer (shut up--I don't drink beer). In these days where obesity is one of our most dangerous health problems, you can now get a remote control for your television that will also open your beer bottle (if you don't already own the item above).

This little gizmo will only cost you $25. I didn't see a recliner with a built in mini-bar, but perhaps I should submit that as an idea and make millions.

If you want to spend your $25 on something a bit more fun, how about buying 125 "Bucky Balls," which "can be molded, shaped and snapped together for endless creative fun." (If you're not into balls, you can get Bucky Cubes for the same price)

I'm sure it's fun...but you can get plastic pop beads for much cheaper. I am envisioning walking barefoot across the floor some night and coming across an overlooked Bucky ball. 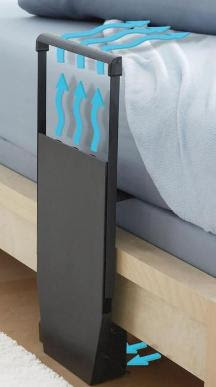 Now here's something no home should be without. For only $80 you can buy a fan that will blow cool air between your top and bottom sheets. My little table fan was only about $20, it's portable, and it works very well...and if I'm REALLY warm under the blanket, all I have to do is kick off the blanket. Voila. I have saved myself $80.

I certainly understand the difficulty with temperature adjustments, especially after you reach a certain age, but good grief, for $80 I could buy a big box of steaks for Phil!

We are all so germ conscious these days that Purelle has invented a whole new industry and Brookstone has cashed in on it with all sorts of things that will sanitize your life...your toothbrush($50, with an optional travel sanitizer for $30), your bed ($130), the air you breathe ($200, or the cheaper model, $130), and all the surfaces in your home ($70).

It's amazing to me that so many of us survived to adulthood without the aid of very expensive sanitizers.

If you don't like your cereal soggy, for only $20 (each), Brookstone has come up with the perfect thing for you. 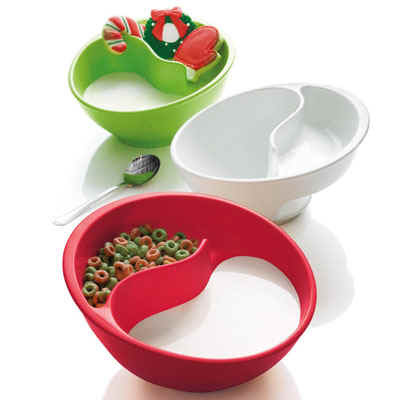 It's a divided bowl so you can just lightly dip your spoon full of crunchy cereal into the milk and then put it in your mouth. In all honesty, words fail me! 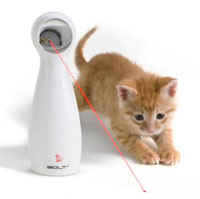 There is even an "interactive laser cat toy" for $30 which will shoot out those red laser rays that the cats love to chase. This means you never have to play with your cat again and can sit in your recliner with the built-in minibar and continue to open beer bottles with your remote control, secure in the knowledge that the cat will have fun all by herself.

I'm so glad I know what the top 1% will be getting this Christmas. I think I'll go donate $10 somewhere so that some child in Africa can have a mosquito net to sleep under to prevent him from getting malaria.
Posted by Bev Sykes at 12:02 AM

Thanks for the laugh--this stuff is nuts! I can't imagine having so much money that I would buy any of these things. Seriously: Bill Gates could give me his entire fortune for all the years I've put up with Microsoft products, and I still wouldn't buy this stuff. Loved your commentary.

Great piece today, Bev! And I loved hearing about your Delicate Pooh (plus the fact that you give him such a place of honor).