I have had a cell phone for many years and I have never figured out what to do with it. I don't mean how to use it, I mean where to put it. Many people carry their cell phones around in their pockets, but since I wear mostly sweat pants, I have no pocket.

I am always on the wrong side of the phone. Mostly it stays in my purse, but I usually can't hear it, then, when it rings. Or if I take it out to be with me, I put it on my desk and then get distracted by doing something in the kitchen and still can't hear it. I rarely actually answer the phone. I usually get text messages or voice messages.

I have tried "holders." I got a cloth one that went on a string around my neck, but that just looked silly. A leather holder that clipped on my waist worked pretty well except that when I was sitting at my desk, it dug into my skin and I would take it off, leave it on the desk and either forget it there, or one of the dogs would sniff it out and chew up the leather.

I still haven't figured out the answer to my problem, but I do have a pair of fairly "good" pants that have pockets and I brought them with me to Santa Barbara, so I was able to carry my phone around in my pocket.

This was actually pretty silly since I communicate with very few people by cell phone and most of them were with me most of the time we were in Santa Barbara. But by god, if I got separated from them, I could have called them.

I was kind of happy with this whole pocket thing until late this morning when I took out the clothes I had washed to pack and bring home. I wondered what all that clanging was in the washer and then in the dryer and, sure enough, my cell phone had gone through a thorough cleaning and drying, as I had not remembered to take it out of the pocked I finally thought to put it in.

So I am, at the moment, without cell phone and will see what Verizon can do for me in the morning. I am about two or three or maybe even four years overdue for their free phone replacement. I was tempted, but my cell phone was special since (a) it was red and you don't see many red cell phones, and (b) it had been teethed on by a puppy (I don't remember which one) and I liked that distinctive quality about it.

But puppy teeth marks will now be no more...and I just hope that in my cleaning of my cell phone I also didn't erase all the information stored on it!

We came home today. We stopped at Tom's on the way out to say goodbye to him, Jeri and Bri. Jeri wanted a final picture taken of her and her niece. 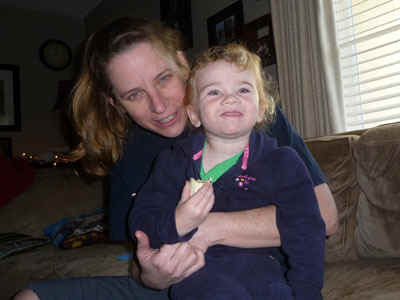 Bri was also interested in my t-shirt, with the sneezing baby Panda, and asked me if I would promise to wear it next time I came. I told I would, if she would be sure her Dad showed her the sneezing Panda video on YouTube. 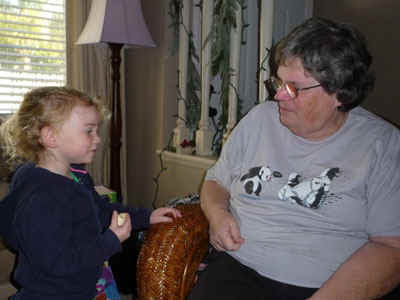 And then we turned our wheels out of Santa Barbara. I'm hoping some of you horticultural types can tell me what this plant is: 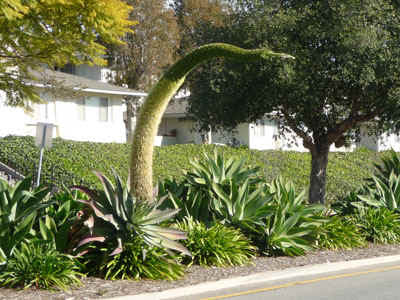 They are growing all over Santa Barbara. I am assuming it is some sort of relative to the century plant but it looks like a brontesaurus hiding in the bushes. They are quite impressive!

I just remembered, we did put John's cell phone through a wash. It was kaput as a phone, but we think they were able to download the information from it. Good luck!