In half an hour, I should be outside looking for the jolly fellow in the sleigh with the red headlight. Last time I checked, NORAD's Santa Watch had him over Salt Lake City.

But for now, with the dishwasher running, the pies baking, and the memory of a nice day, particularly the long dinner, dancing in my head, I am going to sit down and bat out a journal entry.

Still haven't seen the girls and the puppet theater is still in the garage, so can't show you that, but I will tomorrow. I tried a new (cheap) movie making software package to put together the video I took yesterday, but it did a horrendously crappy job. There is a video on YouTube because I couldn't figure out how to delete it, and it will be re-made when we get home, but if you really want to see it, you can check here. I can't believe how bad the quality of the print is.

It was a quiet day. I was NOT the first one up, and surprised (a) that I slept until 7:15, and (b) that Marta was already up and reading when I staggered out.

I lazed around most of the day, took a couple of cat naps, and did nothing much of interest. Ned and Marta went downtown to wander the streets of Santa Barbara, watching shoppers rush by with their treasures, Alice Nan went Christmas shopping and finally, around 5 or 6 p.m. I realized I had to get out to get stuff for pumpkin pies.

It is a good idea not to assume that Joe and Alice have anything I need for baking. Joe does most of the cooking and is an excellent cook, but he's not a baker. Plus they are both very health conscious so I'm never sure if they have things like sugar and white flour. Also, last year I assumed they had spices, but I couldn't find ginger or ground cinnamon, so I left out the ginger entirely and was having Jeri crush whole cinnamon sticks to put in the pie. It turns out they had tons of cinnamon, but they were using it to repel ants in the bathroom. I never thought to look in the bathroom for cinnamon!

So this year I came prepared with pie pans and a rolling pin (last year I used a bottle of wine) and bought flour, shortening, cloves, and ginger along with the pumpkin and evaporated milk.

Joe cooked a fabulous dinner of barbequed chicken breasts he had marinated with fresh rosemary from his herb garden, along with elephant garlic and lemon juice, served with broccoli with hollandaise sauce and white rice.

Finally everyone (but me) settled down for a long winter's nap while I started the pies. I had forgotten that I borrowed Tom's cuisinart last year to make the crust. I refuse to buy pre-made crust, so I went back to the pre-electronics technique of cutting the shortening into the flour with two knives. The crusts actually turned out surprisingly well.

Next came the filling. Most of it went fine, though I had bought whole cloves instead of ground, but that was a spice that they had here, so crisis averted. I also am going to have to scrub the oven of the spills after the pies are done, but for better or worse, they are finished and baking. 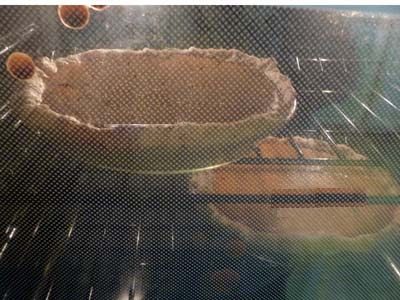 I am looking forward to getting into my kerchief and settling down for my own long winter's nap, but I hear a clatter out on the lawn and think I should either investigate--or hide.

Merry Christmas to all, and to all a good night

And may God bless us every one.