The drive from Davis to Santa Barbara takes 8 hours, no matter which way you go. I prefer to drive down I-5, which is flat, boring, and I think Walt says is a bit longer--but you can drive faster. You drive to Sacramento, turn right, drive an hour through valley towns and share the road with big semis, which I hate, and then at a point, you turn left and drive straight on for hundreds of miles along the viaduct that takes Northern California water and delivers it to Southern California, past endless vineyards (which in years past were empty hills and flat grassy areas), past the feed lot for the Harris Ranch (there is no missing that little place, with thousands of cattle, doing what cattle do best, the smell of which can wake you from a sound sleep).

You reach Kettleman City, in the middle of nowhere ("city" is a misnomer--it is a collection of fast food joints), turn right, drive another hour over to Highway 101, then turn left at Paso Robles and drive to Alice Nan's house.

Walt prefers to go west on I-80, veer off onto 680, and drive down to San Jose, where he picks up 101. 101 has more of interest, but is more congested and the mental "bookmarks" that I have in my mind seem farther between. It's a perception thing.

Whichever way we go, there are rest stops along the way. On I-5, I know every bathroom between Davis and Kettleman City from the days when I was drinking even more water than I drink now and had to stop every 20 miles or so to make room for more. Fortunately there are official state-run rest stops, with nice vending machines, every 20 miles or so once you make the left turn.

I know where all the McDonalds' are if I'm feeling sleepy and have to gauge whether to buy my iced mocha now or wait for the next one....and can decide if I want a drive-thru burger or to push on to Pea Soup Andersons for a sit-down lunch of a bowl of their famous pea soup and a tour through the ubiquitous gift shops.

Along the road from Kettleman City to Paso Robles, where it hooks up with Hwy 101, I gauge how green the hills are, whether there are wildflowers or not (not at this time of year, of course) so I know where I should look for a place to stop, where the wildflowers are at their peak, and decide whether I want to stop at the James Dean memorial at the half way point to take pictures or not. The memorial is not far from where Dean was killed, but is so subtle, you almost have to know it's there to find it.

Walt drove yesterday, so we came down I-5 to 680 to 101, which means that we stop at one big mall area so Walt can use the facilities at McDonald's, then down through Salinas, where I always get a wistful pang as we pass "John St.," because it reminds me that we are going through Salinas yet again and I have wanted to visit the John Steinbeck museum since the 1980s and still have never done it. 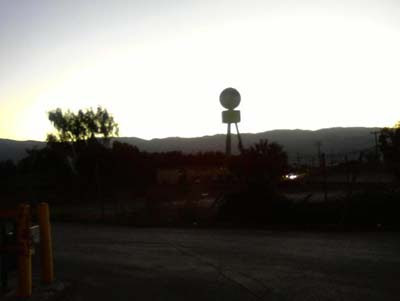 We both ordered mushroom burgers for dinner, which come wrapped as tightly as a baby in swaddling clothes, which is good because they are so full of burger and cheese and mushrooms and (for me) onions that if you try take them apart, they literally fall apart in your fingers. 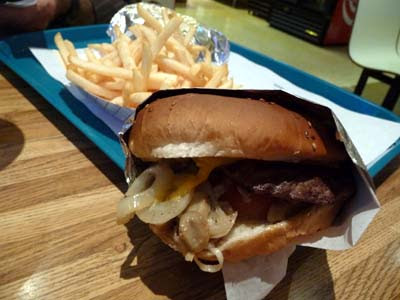 There was a young girl, about 16, who was working there who was trying to be so friendly. She asked where we were from, and seemed surprised that we had come all the way from Sacramento to have lunch there--she didn't seem to have a good grasp about how far it was. Later she saw me reading on my Kindle and asked if that was my "reading machine" and then wanted to know what story was reading. When I tried to explain the book about the brain that I was reading, she looked like she couldn't believe I could be reading that for enjoyment.

Walt pointed out something I have noticed too. If you are listening to an audio book (we were listening to Michael Connelly's new book, "The Drop"), you tend to get disoriented, especially at night, because you aren't seeing your usual visual cues. I remember being surprised to see that we were in Greenfield, for example, which is about 10 miles from King City and I thought we had passed through King City about 20 minutes before.

So Walt nearly missed his usual stop for gas, but did manage to pull off in time. He started pumping gas and I went to the rest room. It was on of those stalls where the toilet paper is wound tightly inside an almost impenetrable steel container. I was able to get a couple of sheets of one-ply to tear off, but then even sticking my hand way up inside and trying to run around the outer edge of the TP could not find its "free edge," and so I had to make due with the paltry bit of paper in my hand, which was not up to the task and tore as soon as it reached my body.

Fortunately there was no such difficulty getting enough soap for the hand washing.

Walt then took his turn in the rest room, but since he had locked the car and since it was freezing outside, I waited in the little gas station minimart. There were two guys in there, the young man who ran the place, and an older Hispanic man. The two were arguing about marriage. The older man was telling the kid he should never get married and that he could get all the sex he wanted without the commitment to share half of all his stuff with a woman. The kid was arguing that marriage was "created by God" for us and that to have sex outside of marriage was a sin. I butted in with the fact that I had been married 46 years and they could ask me anything. The Hispanic guy told me I was a saint.

About this time Walt came out of the bathroom and we continued on our way.

The rest of the trip was uneventful, mile after mile of darkness while Harry Bosch went on about his investigations. We pulled up here earlier than expected and sent off a picture to Alice Nan (who was at a neighborhood party) to let her know we had arrived. 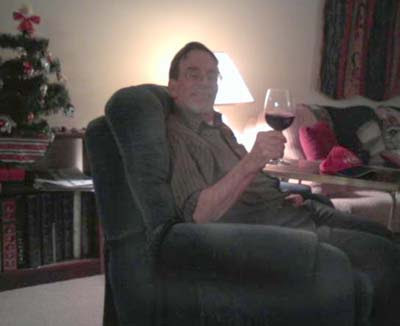 We had reached our last (and best) rest stop.

Email ThisBlogThis!Share to TwitterShare to FacebookShare to Pinterest
Labels: Driving

Glad you had a safe trip. Fortunately our trip tomorrow is only a little over an hour.

I loved reading about your trip! May we now refer to you as "Saint Bev?" ;-)

Salinas, John Steinbeck, James Dean, "East of Eden." Yes, I would want to go to the museum, too.