I'm finding out what a "support group" is all about.  The Senior Center has a dementia workshop on the third Wednesday of every month.  I was pretty good about going every month, but as the issues with my mother subsided (i.e., I had all the answers and knew what issues had no solutions), I got lax about going.  It would think about it and then realize that the third Wednesday had passed.  Again.  But I put it on my calendar this month.

I had no "issues" this month, but decided to go anyway, and it was great.  Seven people, two of whom were new to me.  Those two were still struggling with specific issues and we got into a discussion of local doctors ... who was good and who was someone who should be avoided at all costs.

I am someone who has loved "doctor shows" from the first time I saw one on TV.  It was probably Ben Casey and I've followed most of them from Ben Casey through St. Elsewhere, M*A*S*H, Marcus Welby and today's shows like Code Black and Chicago Med. I loved Hawkeye Pierce and McDreamy and Dr. Quinn, Medicine Woman and Dr. McCoy and even Doogie Howser

I learned that doctors are always warm, caring, knowledgeable and miracle workers.  Even Dr. House, who may nearly kill a patient who came in for a simple rash, always cures them in the end, after using every machine and test available in the hospital.  House would be my last choice of a doctor!  I always wanted Dr. Welby to be my doctor.  A guy who seems to have nothing to do but stand around waiting for a call so he could make a house call.

Apparently people who work in gerontology never watched doctor shows.  The horror stories about uncaring or incompetent doctors is staggering.  Doctors who refuse to give tests for dementia, even simple tests (this was true not only of my mother but of others as well), doctors who will sign a release for someone who clearly has dementia to drive a car (or, if Congress is to be believed, buy a gun), doctors who listen to the patient with dementia rather than his or her caregivers to decide what is the proper course of action to take or medication to prescribe...and the disastrous results that follow.

(There is one particular doctor who is detested by the leaders of the group, who think he is the worst thing to happen to Davis.  I am always embarrassed and never admit that I used to work for him in my my medical transcriptionist days.)

But the nicest thing about being back in the group today was just listening to everyone who is dealing with the same sorts of problems.  I am the only one with a loved on who is NOT living at home, so I have it easier than most of the others.

And to prove it, I went to Atria to visit my mother when I left the meeting.  It had been my plan to have lunch with her, but there was no parking to be had for love nor money, so I stopped a couple of blocks away and had lunch at a Panda Express.  I couldn't decide between their orange chicken and their walnut shrimp, so I ordered a "plate" instead of a bowl and got both, knowing that it was going to be WAY too much food for me.  And it was.  I had a whole lunch left over to bring home to Walt.

By the time I got back to Atria, there was (thank you, Gilbert) a real parking place.  I had bought her a little box of Sees candy for Valentine's day and between the two of us we ate the whole thing (4 pieces each).
This was one of her better days.  Amazingly, she didn't ask me once what I was doing tonight, and, after the zen that comes from the dementia meeting, I just let her lead the conversation and went wherever she seemed to need to go.

We did talk a lot about her laundry (I had returned her clean clothes today) and how amazed she was to learn that I've been doing it for her for nearly four years and that she doesn't pay me to do it.
In the evening there was Jeopardy and the nightly shows.

After Walt went to bed, I sat up to watch the late night shows.  I record both Colbert and The Daily Show and then watch the opening monologues of both.  Rarely do I watch either show all the way thought.

Tonight Trevor Noah said he had finally figured out the problem with Trump.  He's the oldest person to ever be inaugurated as President and he (Noah) realized he's just a grumpy old man.  Noah was very funny as he portrayed Trump in all sorts of situations where he was reacting like a grumpy old man and went out of his way to say often that Trump was  OLD....VERY OLD

I will turn 74 tomorrow and I am feeling the need to go lie down now, I think. 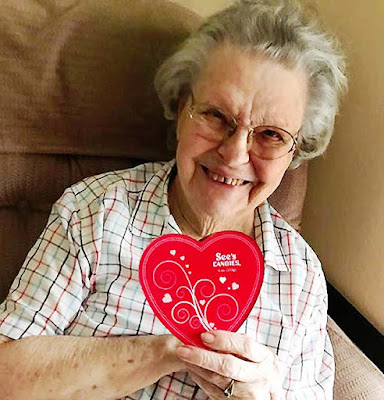