The politics in India have changed and it appears that by the middle of next month Compassion International will have to end its sponsorship programs in that country.  I sponsor two children there.

I began sponsoring Venkanna since June of 2014.  He is 14 and is in 8th grade.  He was scheduled to complete the program in 2025.  He lives northwest of Vijaywada in the state of Andhra Pradesh.  In the area where he lives, there are no water or electricity services and part of the Compassion program is to teach the children about basic hygiene.

His father is a farmer and he has an older sister (22) and a brother whose age I don't know.  He is one of my better letter writers.  He writes in English and unlike some of the other children who seem to write in standard phrases, he always gives me information about his house, his school, his activities and, when there are local celebrations, he lets me know about the holiday and how they celebrated (I spend a lot of time on the internet checking out Indian holidays)

Though I care about him and write to him frequently, I don't feel as close to him as I do to Anjali, who was the very first child I sponsored through Compassion in 2009.  I chose her because she was kind of a chubby kid and I remember how I felt as a chubby kid and thought perhaps she would not be easily selected by others.

She has grown into a beautiful young lady and she writes more often than any of my other kids, and much longer than any other of the children.  She lives with both her father and her mother and has two siblings.  She lives on the plains of Nandyal, in the south of India and is now 12 years old 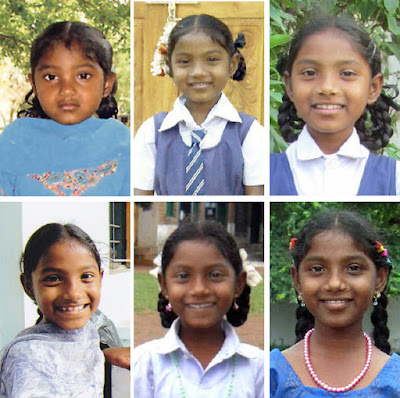 In her first letter, she could barely write in English.  She wrote this and then there was a letter written by someone from Compassion.

Now, 8 years later, she writes her own long newsy letters in English.  This is the close of the last letter I will receive from her.

I feel so close to her and it is breaking my heart to know that I will not be able to contact her again, or even to send her an end-of-sponsorship gift.  I will miss the unique way she writes her r's.

This is how Compassion explains the problem:

For 48 years, Compassion has operated in India, helping over a quarter of a million children break the cycle of poverty.

Compassion only works through local church partners. In each of the 26 countries in which we work, we make needed adjustments to our programs to ensure we always comply with the local laws. In India, that has meant we have worked within the confines of Indian law to provide our Child Sponsorship, Child Survival and Leadership Development programs through existing church partners that possess a valid license to receive foreign aid. Last year, in February 2016, the Indian government issued an order against Compassion requiring prior clearance from the government before funds could be transferred to all our partners in India. We have never been offered an explanation for why this order was issued. We do know that Compassion is not alone in facing this challenge. In the last two years, 11,319 other nongovernmental charitable organizations have lost their licenses.

I don't completely understand it all, but Compassion has exhausted every avenue they can for the past several months, in vain.  Most of their centers in India have had to close and they expect they will all close by the middle of March.  In all honesty, I wont miss Venkanna all that much, but I am heartbroken to think of losing Anjali.  I was looking forward to following her into adulthood.

Compassion has not used any of the monthly payments I have sent to each of the two kids so when/if this becomes final I can use the funds for 10 months of sponsorship for two more kids, which I probably will do.  But with as many kids as I sponsor, I don't think there will ever be another child with whom I feel the closeness I do to Anjali.  She was the first and only during the early years.
Posted by Bev Sykes at 8:56 AM