Because of Saturday 9 and Sunday Stealing, I didn't get a chance to recognize "World Outlander Day," which is June 1, the anniversary of the publication of the first Outlander book ("Outlander") in 1991.

Though I am an avid fan of the 8 books (and eagerly awaiting Book 9 later this year), it didn't start that way.  I don't know who recommended the first book to me -- it might even have been my mother.

I can't remember if I read it all the way through the first time or not, but I set it aside for a long while.  I don't remember what made me pick it up again, and this time got caught up in the magic of the Outlander world and read that and the subsequent books which had been written to that point.  I don't think it had anything to do with my Scottish heritage, but that didn't hurt.  And I don't think that I was immersed in the Outlander story when Walt and I went to Scotland or I would have paid more attention.  I was more interested in bagpipes than anything else.

This is a time travel series, and I'm not really into sci fi.  But it's not really sci fi.  It's a great love story, and I'm not into chick lit but this is...different.  It is kind of historical fiction and I've always liked that, but I certainly would not file the books under "history." I'm not into war books or cruelty in books.  And yet the series is all of these things and I love it mostly because Diana Gabaldon is such a good writer.  Above all, I like good writing, especially in long books (most books are >1000 pages).  And she does incredible in-depth research on the era she is covering (18th century Scotland).

I loved the story of Claire, a married former army nurse on her second honeymoon to Scotland with husband Frank, an historian, when, on a solo trip to a site of some standing stones, so prevalent in Scotland, she happened  to touch one of the stones and was instantly transported to the 18th century.
Attacked by her husband's look-alike, Jonathan ("Black Jack") Randall, whom Claire realizes from her husband genealogy research is his umpty umpth grandfather. She is rescued by a band of highlanders and taken to a house, where she ends up treating young Jamie, who has a dislocated shoulder.  The rest is the start of history.

Over the next books, they fall in love, marry to save her from Randall (making her an historical bigamist), both Claire and Jamie at different times, are captured and tortured and saved by the other, they live in France trying to change history, unsuccessfully, during which time Claire is raped by the King.
They return to Scotland  Knowing Jaimie will be killed in the upcoming battle of Culloden, Claire returns to the 20th century to give birth to their child so there will be "something left of him" after his death.   Twenty years later, after discovering that he survived the battle and was working as a printer in Edinburgh, she returns to Scotland to see if the romance is still there.  It is, of course.

There follow many adventures with pirates, indians, and lots of different bad guys, always with the relationship between the two foremost in the story.  Author Gabaldon says the story will end with Book 10, so there are at least three more years before we know in which century Claire dies.

Fans of the books were thrilled to say the least when STARZ decided to make a mini series out of Book 1.  Gabaldon had turned down many offers to turn the book into a movie, feeling "a" movie couldn't possibly cover the material in the book, so a mini series seemed  the perfect idea.

Casting was important and the first criticism came from those who felt Sam Heughan, cast as Jamie, wasn't tall enough (Jamie's height is a big part of all the books)  and his hair not red enough.  People complained that Claire's eyes were not the right color.  But the chemistry between Heughan and Caitriona Balf was perfect and everyone grew to love them in the roles.

Season 1 was pretty well perfect, though there were some visual things that made me wonder.  For example, the first day Claire is with the highlanders, they ride all day for 2 or 3 days, she sitting on a horse with Jamie.

Her voice-over says that she hadn't ridden a horse in years, yet she gets off the horse without a sign of soreness or without problem riding.  Now THAT is suspension of disbelief!!

The casting of Tobias Menzes as Claire's husband Frank and as Black Jack Randall was brilliant (it will be interesting to see how he does as Prince Phillip in the next series of The Crown).

The costuming is gorgeous.  I could not find a good picture of Claire's wedding dress, which was amazing, but this one from their year in France (Season 2) was one of my favorites)

Jamie's rape by Black Jack is about the most graphic scene in the series, so difficult to watch, but so "appropriate" to the story.

Last season Jamie and Claire's daughter Brianna went through the stones to warn her parents of news of their impending death, which she read in an old newspaper.  When Jaimie meets his daughter is one of the really tearjerker moments.

...and so many more.  Memorable characters, memorable incidents.  Is it any wonder that someone decided to set aside a day to honor the book, its author, and the TV series.  I can hardly wait for the next season on STARZ and the next book!

One of the things that has kept this series so popular is how accessible the stars have made themselves to fans.  Sam Heughan tweets all the time, Caitriona Balf and Diana Gabaldon less so, but still often.  There are opportunities on You Tube to see what is going on behind the scenes of the filming and Heughan even did a fund raiser for a charity this year, bringing a lucky fan to Scotland for a "date" with him.  I haven't come across another show that is quite that open and accessible with its fans. 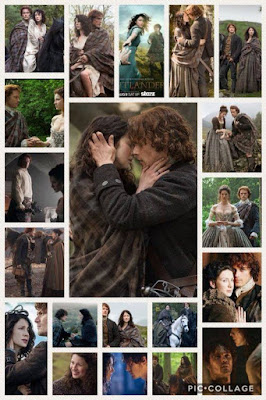 Email ThisBlogThis!Share to TwitterShare to FacebookShare to Pinterest
Labels: Outlander