Everybody's favorite British soap opera has returned for its final season.  Julian Fellowes, creator and sole writer of the series promises that this sixth season is going to tie everything up neatly, all those threads we have been following for so long.

While we will all shed tears when the show finally rides off into the sunset, they are being so smart, leaving while the popularity is still high and before everyone talks about how the quality seems to have slipped.  It's also nice to quit while the babies who have been born at Downton are still cute little kids

The end of Season 5 finally saw the culmination of the world's slowest moving romance when butler Carson proposed to housekeeper Mrs.  Hughes.  We had watched these two as good friends for four seasons, and then, uncharacteristically, we saw Carson let down a bit as he and Hughes held hands and paddled on the beach on a servant's holiday toward the end of Season 4.

But Carson finally popped the question and one thing we will all be looking forward to is their inevitable nuptials.

Interestingly, in Episode one of the current season there is a conversation between Mrs. Hughes and house cook, Mrs. Patmore, about the physical side of marriage, each confessing she had no personal knowledge of the subject.

I found that rather odd, since both women are called "Mrs." and I assumed both were widows, so I went to my source of information and asked about it on Facebook.  My friend diane, who lives in England, sent me to a fascinating article called "Mistresses and Marriage: or, a short history of the Mrs." which explains that Mrs. used to simply mean an adult female, whether she had been married or not.

My friend Sian, who lives in Orkney says "In Orkney, locals never use the term woman, it's either 'lass' or 'wife/wifey' Once you are over a certain age you are a 'wife' whatever your marital status!"

Romance seems to have dominated a lot of characters in this show.  In the last season we learned that the Duchess of Grantham,  the marvelous Maggie Smith (whom I will miss dearly!), had a former tryst with a Russian prince, who turns up in Downton and rekindles old feelings.  Whoda thunk the old girl had such passion left in her.

I was sucked into watching a Downton Abbey marathon over the weekend, and sadly watched as the Duchess said goodbye to her former lover when his wife turned up.  (There was absolutely no doubt what drove the Prince into the arms of the Duchess!)

The marathon was fun to watch because it brought me up to speed on where Season 6 starts, but my god was it an over-exultation of the show.  You would have thought we were waiting for the Second Coming to watch the hosts of the marathon.  I love the show, but not nearly that much.

Of course the threads to be tied up in this season include whether Lady Mary will ever find true love...

...and whether everyone's favorite downstairs couple, Anne and Bates will be able to be rid of their troubles and find their happily ever after.  (And whether she will ever call him anything but "Mr. Bates.")

So many questions to be answered, so many threads to be neatly tied up, and Fellowes (and others) have promised this will be "the best season ever." 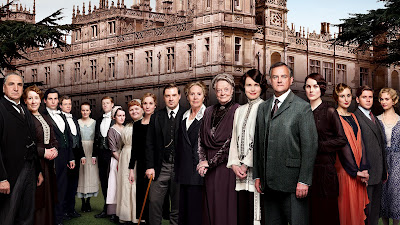 Anna and Bates are my favorite couple but Mrs. Hughes and Mr. Carson are a close second!