It is a promo for the upcoming Lamplighters Gala and is, I suppose, a good explanation of what a "gala" is and a taste of what this year's show is going to be.  For me, having been involved with all aspects of galas, from the very first one, through writing them, to now just audience, the tone was a bit too scholarly, but I would hope that the theme of this year's show, Downton Abbey will intrigue some people to maybe wanting to go and see the show.

The Gala was "invented" in the 15th year of the Lamplighters history (the company is now more than 60 years old).  The company needed money and so they decided to take a break from the usual Gilbert & Sullivan productions and do a one-performance "gala," which would feature the actors in funny situations using the music from the shows that had been done that year.  It would be strictly a money maker, would require no new sets of costumes, they could charge a higher price and following the show, there was unlimited champagne, donated by a local winery.

The thing was a huge hit, despite an unplanned special effect when malfunctioning cooling equipment backstage began to pour smoke into the theater.  I remember looking around at that firetrap and wondering if we should leave, but the general manager came out to explain the problem, assure us that there was no danger, and the show went on.

I remember after the show that Walt and I stood with one of the leading tenors drinking gallons of champagne. I went home definitely in my cups.

It was such a big success that a "gala" was factored into the schedule in subsequent years and was usually the final show of the year.  It was almost always a variety show format and it was not until 1982, when Gilbert, David Witmer and I revolutionized the format, that it became a "plot show."  The company was doing Pirates of Penzance that year and the patterman in that show is Major General Stanley.  Gilbert, David and I were walking to lunch one day, thinking about the upcoming Gala when David, who was a soap opera buff, just said "Major General Hospital." It was inspired. Flashbulbs went off over each of our heads. We talked about making that year's gala a "soap operetta" and rapidly started thinking of tunes we could pull from other shows that we not being performed that year.   (I rewrote a song, from Mikado, to be a Tupperware song for a group of women going to a Tupperware party.  I even got Tupperware to donate some free gifts we could use as props.)

It took a lot of convincing to get Gilbert to agree.  He adamantly said that chorus members could not learn music from other operettas for a show, but we finally got him to agree to try. The thing was a riotous success and for many years people still said it was the best show we had ever done and kept wanting to reprise it, but we never did--mostly because it wasn't that great a show.  The greatness of it was in the element of surprise--nobody had ever seen anything like that on the Lamplighters stage.  Even the critics went wild--and in a few outstanding numbers (a cash register in an operating room, with someone adding up every single item as it was used was one of those, the title song was another).  But if you looked at it critically later, the show itself didn't hold up.

But it set the stage.  We had proved that principals and chorus members could learn songs that were not in shows from that year. I have to add also that the whole process was more complicated than I realized for years, until we started to do a gala type show here in Davis.  I hadn't thought of the music part of it, not being a musician.  To do the kind of Gala that the Lamplighters were now doing, you had to own all the orchestral scores for all the Gilbert & Sulllivan operettas, and you had to have someone who could spend weeks putting them in the proper order for each instrument, sometimes writing original instrumentation linking two numbers from two different shows.

Gilbert, David and I only did three Galas before Gilbert died, but his magnum opus was something he'd wanted to do for years, which was to write a Gilbert & Sullivan version of Wagner's Ring.  And he did it.  (That operetta was also titled A Star is Born, which was MY long-held dream!)

Everyone wondered what was going to happen when Gilbert died.  He died in July of 1986 and we hadn't even come up with a theme for that year's show yet.  But the Lamplighters is a company of tremendously talented people and a committee was formed, which worked on the shows for several years and the tradition continued.  I was on the committee for a couple of years.  I can't remember if I was part of the group that created The Phantom of the Operetta, which featured a group of nerds studying bats (they were chiropterologists), but it was an inspired theme and a brilliant opportunity for my friend, the late Will Connolly (the squinty guy in the bow tie below).   One of his more memorable roles.

I eventually left the committee, realizing that, not being around the company all the time, I had become less and less valuable--you really need to know all the in-jokes.  And besides, "star" writers were showing their talent.  I don't know how many contribute to writing these days, but not the large groups that we had in the beginning...and the shows keep getting better and better and better.

This year's is a take off on Downton Abbey and I know it's going to be hilarious, whether you are a Downton Abbey fan or not.  It's the Lamplighters' biggest fund raiser and, sadly, with the slumping economy, it no longer gets sold-out houses, though the quality of the productions is better than ever.

But we'll be there this weekend and I can't wait. 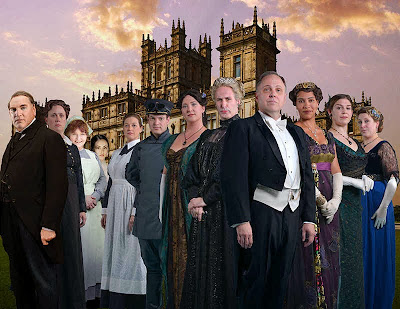