I feel like this is a day of short stories.   Actually, I didn't get that idea until mid-afternoon, sitting in front of Peet's Coffee having a raspberry mocha with Walt. 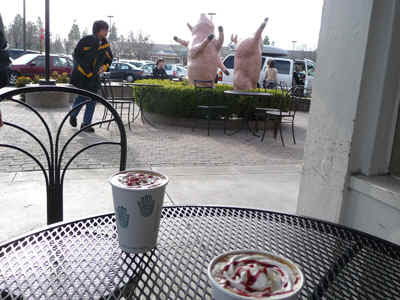 Shortly after Walt sat down, a guy came walking up the street to my left.  It took me a minute to realize that he was dressed in a t-shirt and royal blue pajama bottoms, with some kind of pattern all over them, maybe space ships or rubber duckies or something.  Definitely pajamas.  He continued walking and quickly disappeared around the side of the building and I didn't think much about it until we were heading back to the car, when I saw him again.  He was coming from the direction of the supermarket and he had a case of beer under one arm.  He headed out to the street and disappeared before I could get my camera out.  But I figured there was a short story in the making if ever there was one. 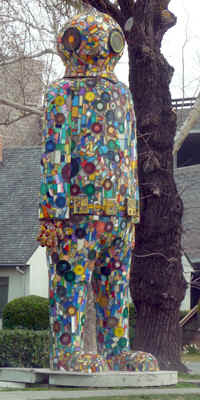 I'm not sure the other stories were actually stories or interesting, but we have done a few things today.

We drove downtown this morning because Walt had promised to take me to brunch at Cafe Italia, which was offering crabcake Benedict as one of its specials.

On the way we passed this huge guy standing outside the Natsoulas Gallery.  I had seen this statue before, but wanting to add the picture here made me look up exactly what it is.  This is what I learned:
Symbolically towering in front of the gallery itself, at nearly eighteen feet in height and approximately 2,300 lbs in weight, is the daunting Stan the Submerging Man, an internationally acclaimed sculpture of  [Finley] Fryer’s constructed and installed at the 1999 Burning man Festival in the Black Rock Desert, Nevada. A collaborative piece constructed with the help of Fryer’s wife, artist Jayne Bruck Fryer, and Kirk LeClaire—whose wildly eclectic musical show called Stan’s Room provided the inspiration for the statue of the titular character—Stan aka the Diver serves as a brilliant introduction to the exhibition as well as an emblematic induction into the creative mind of the artist himself. Stan’s internal structure is fabricated of various dimensions of steel and can be disassembled into fourteen individual pieces. Using 600 tubes of clear latex acrylic adhesive caulk, Fryer attached an exterior ‘skin’ of donated plastic and colored vinyl’s collected by LeClaire that are illuminated at night by 1000 LED lights, illuminating the reclaimed consumer detritus in the spirit of a new realism.

So now we know!  I obviously need to go downtown at night and see if this guy lights up!

We continued on to Cafe Italia where we had probably the very best crabcakes Benedict I can remember having.  Both at Cafe Italia and at Peets later, Walt and I again turned into those people that I make fun of.  We are still trying to figure out our new cell phones and it's fun comparing what sorts of things we've discovered, so we each sit there looking at our phones and trying out stuff. (I'm currently trying to get the hang of "Four Square.")

After brunch was over, we both had to make a trip to the restroom before leaving.  It wasn't so much that nature was calling it was...how often do you get to use the fabulous Dyson air blade hand dryer?  So much better and more efficient than the kind we all know that blows air on your hands and never dries them.   The Dyson sucks the water off your hands (without touching your skin) and your hands come out dry.  I wish there was a big move to change all public bathroom dryers to the Dyson!

To get to the restroom, you travel past all these absolutely marvelous old movie posters.  I particularly liked this hall: 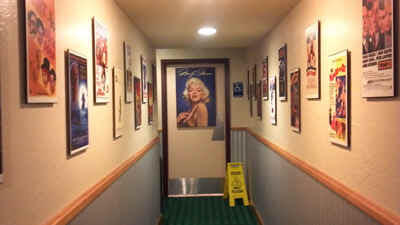 You discover when you get to the end of the hallway that Marilyn is the signal for "women's" and it sits next to the "men's." 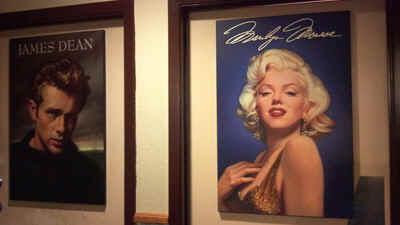 Our final story for the day was the annual Citizens Who Care concert, performed by a bunch of friends of ours.

These guys have been doing this concert for 20 years, to benefit Citizens Who Care, a nonprofit organization in Yolo County, dedicated to improving the quality of life for the frail elderly and their family caregivers through social support programs..  Walt is on their Board and has been in charge of publicity for this show, which, this year, features the music of (the lyrics of) Ira Gershwin.  This is one of my favorite concerts of the year.

As the evening comes to an end, I close the book of these short stories, smiling because it was a lovely book.
Posted by Bev Sykes at 12:02 AM

The only place I've seen those hand dryers here is in Costco. I figure Dyson placed them there in an attempt to interest potential buyers. They certainly are LOUD.

I've seen those dryers in an airport recently - can't remember which one - maybe Nashville?

I don't think they are any louder than the blowers, and more efficient, so the noise lasts a shorter time.