I picked up my computer this afternoon. This is one of the many photos my guru showed me to let me know how full of dust the machine had been... 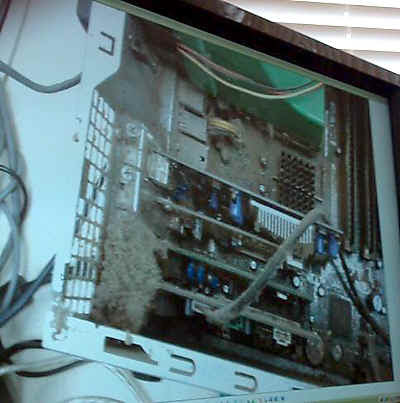 There was an even bigger blob in an earlier picture. Very embarrassing! But who knew you should clean out the inside of your computer? I've had a computer for about 25 years and I've never cleaned out the inside. Walt says he's cleaned his once, when he dropped something and had to open the machine to retrieve it, and decided to get some dust out at the same time. In fact, the guru had even told me when last serviced it that it wasn't all that bad and that I should see some of the computers he had to clean out. I suppose I now have become one of "those" computers.

He says you should open your computer twice a year and blow out the dust. So all of you who, like me, never thought of doing such a thing should take heart! Get yourself some canned air and give your computer a blow job.

The other thing he told me is that reg cleaners, like My Clean PC, are scams. They charge for a program which accesses your files, gives the company your vital information and eventually will infect it with a huge virus so they can charge you another amount to fix the virus. DO NOT BE FOOLED BY THE SLICK ADS FOR MY CLEAN PC seems to be the lesson learned!

This guy really knows his stuff, but I'm not sure if he thinks I'm an idiot or a savant (or perhaps an idiot savant). His office is on 3rd street and he told me that as I entered town, I would see 6th street, then I should go to 5th and then 4th and then 3rd. Like I couldn't count down from 6 to 3. But then he gets me into his workshop and he tosses out so much technospeak which just spews forth in a continuous stream. He's sitting down, I'm standing up. He can see the screen, I can't focus in it, and when I do see what he's talking about I can't make heads or tails of the stuff I'm seeing on the screen. And even if I could, it takes me longer to process and by the time I'm starting to process, he is 4 lines of code ahead of me.

We got the computer home and set back up again. The Guru has the laptop, now, which started just fine for him, though I tried for 2 days to get it to start, unsuccessfully. Walt is happy. He has his computer back, and I only added a dozen bookmarks to his system! :)

For those who have been following my mother's health problems, you must read the journal entry I wrote one year ago today. It is called "The Road to Wellville" When I read it, I called her and we both laughed a lot.
Posted by Bev Sykes at 12:02 AM

Email ThisBlogThis!Share to TwitterShare to FacebookShare to Pinterest
Labels: computer

That's a lot of dust! I've cleaned out my computer periodically but my spousal unit took over the job a few years back. Which reminds me, I need to clean out my computer again. Men never clean, heh.

Yikes! That's a lot of dust! I wonder what mine looks like?