My godmother's name was Mary Fourtner, but we always called her Babe.

Babe and my godfather, Fred (my great uncle) at my First Communion

I don't remember her much.  She died of cancer when I was 10 years old, but I remember her snow white hair--she had gone white in her 20s, apparently.   She was married to Gus Fourtner, my grandmother's cousin, who was a district attorney in San Francisco, but who died before my parents met, so my mother never knew him either.

My mother and Babe were wonderful friends and when my  mother decided to become a Catholic, Babe was her godmother.  Babe was a very proper lady who worked as a legal secretary and had a very proper home.  She was also a devout Catholic and I know it shocked the heck out of her when she invited Father Joe (who baptised my mother) to her home for a very formal dinner with the family after the baptism and not only did he shed his clerical collar, but he and my sister, who was about 5 at the time, spent their time laughing and putting pitted olives on their fingers and waving them at everyone.  Father Joe was never a "proper priest."

When Babe died, she gave the bulk of her estate to my mother (which infuriated my grandmother who had been waiting for a big windfall).  My mother didn't get any money, except a small amount, but most of the things in Babe's house went to her.

My mother asked me at the time if there was anything from the house that I wanted as a keepsake of my godmother.  I didn't want to ask for anything big, so I asked for one of those acrylic blocks that have a rose etched into them.  The thing always fascinated me and I loved holding it when we went to visit her.

It still sits on a shelf on a bookcase in the living room (one I have not catalogued here yet!)
Some time ago, in one of her "junk purges" that my mother goes through trying to get rid of "all this junk" in her pristeen home, she gave me a leather bound journal which had been Babe's. 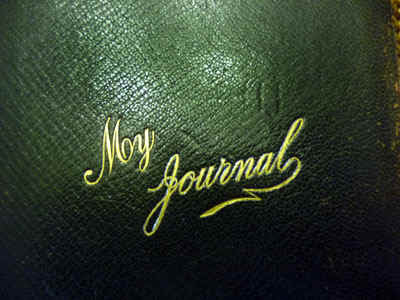 The journal recounts the honeymoon she and Gus went on in 1913, taking the train across the country to Boston, where they boarded the steamer SS Cymric, which sailed the route from Boston to Liverpool until 1916, when it was torpedoed by the Germans on the 8th of May 140 miles NE of Fastnet. (ain't Google great?).

Once they arrived in Liverpool, they went immediately to Ireland and then continued a European tour 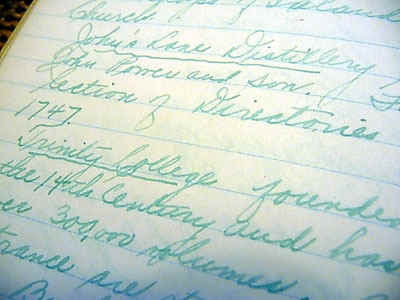 The journal has been sitting on my desk for a couple of years now and other than giving it a cursory glance now and then, I had never actually started reading it
.
But I started reading it today.  What a fascinating story.   It mostly reports what time they got up, where they ate, what they saw during the day, where they stayed, etc.  It's cute that this young bride always writes "my husband" in quotations, as if she is trying to get used to the idea of having a husband.

Within the accounts are little glimpses of life in 1913, like splurging on a dinner that cost 76 cents for the two of them.  Complaints of heat are consistent throughout the train trip across the country (in August!), reminding me that this was the time before air conditioning....and before transoceanic flights!!

There is shock at the poverty they found in the area around Cork.   "I did not believe such dirt,filth, or poverty existed in the world as we saw there and by the time you come to the end you are distracted with the children running at your heel calling 'Copper, Sir...?' 'penny, Miss...?'  It left a sad feeling with us."

As I reluctantly put the book aside this afternoon they had just had a rough crossing across the Irish Sea to Holyhead (in Wales--we set out on a ferry crossing in the other direction, from Holyhead to Dublin on our first trip to Ireland) and had arrived in London. I can't wait to read her comments from that city, which I know fairly well.  It has been nice spending the afternoon with my godmother, after nearly 60 years!
Posted by Bev Sykes at 12:00 AM

Email ThisBlogThis!Share to TwitterShare to FacebookShare to Pinterest
Labels: Babe

What a treat - to be able to read such a real, personal slice of life.

Yes, I agree and treasure the things I have from my mother. One is a cookbook from 1925 with inserted newspaper recipes. It's fun to read the ads on the back.

Wow--what a find! I love reading my relatives' journals.