You'll be happy to know this is the pentultimate tsatske entry. Today I'll deal with the Judy Garland (more accurately Wizard of Oz) shelves. The thing is that I've been a lifelong Judy Garland fan, but never really a big Wizard of Oz fan, but it seems that lots of people give me Oz stuff. And, in truth, I have even bought myself Oz stuff. So here is that collection of stuff. It occupies not one but two shelves on the etagere. 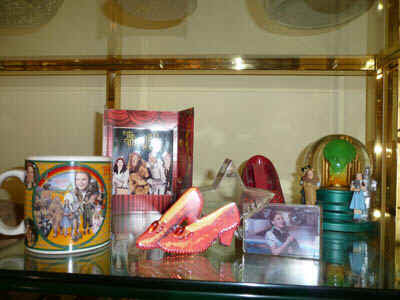 As I look at this shelf, the embarrassing thing is that I don't really remember who gave me most of these things. That glittery ruby slipper in the back was the "box" that came with a Wizard of Oz watch that my mother gave me one year. The star isn't technically anything having to do with Judy Garland or Wizard of Oz. My friend Ann gave it to me one Christmas many years ago. It has glitter in it which floats around when you turn the star upside down. It just seemed the right shelf for it.

I think I bought the water globe myself, but it may have been a gift and if it was, I abjectly apologize to the person who gave it to me!

I do know that the picture at the back of the shelf... 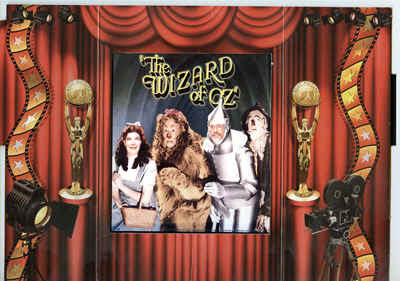 ...was the only one of those "put your face in here" souvenir pictures I have ever taken...but how could I not? This was taken in the tourist trap shops along Waikiki Beach on a trip Walt and I made with a couple of Brasilian couples.

This is the second shelf. 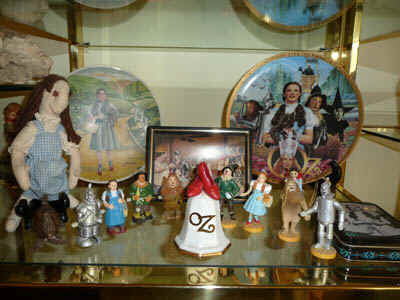 But I know where I got the framed card in the middle. 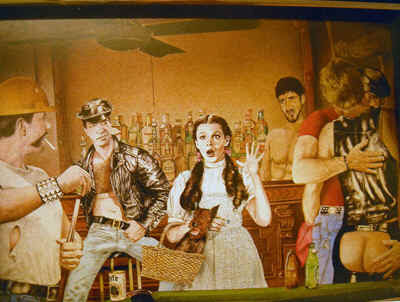 It was a birthday card given to me by Ned's friend Brendan (who died in March of last year). He was afraid I might be offended, but it was the only card I think I have ever framed, and it's had a place of honor in the living room ever since.

Naturally the inside of the card says "Toto--I've a feeling we're not in Kansas any more."

What's missing on these shelves, which must still be packed away somewhere, is my Dorothy cow that Tom gave me--a cow dressed in Dorothy's gingham pinafore and ruby red hooves. One of my favorites!

Email ThisBlogThis!Share to TwitterShare to FacebookShare to Pinterest
Labels: tsatskes

I love your Wizard of Oz shelves! Especially the ruby slippers.

One of my best friends is a real Oz collector--she would drool over your shelves.