Oh What the Heck

Let's finish this tsatske project and be done with it. Here are the last two shelves.

It's actually one long shelf and here is the left end of it. 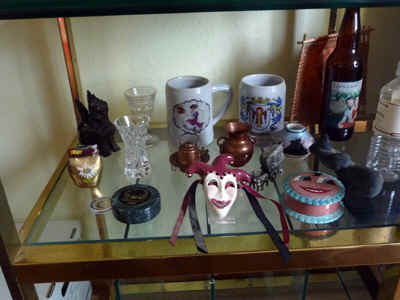 The little bell on the left was given to us by Suzanne, a woman from Switzerland who stayed with us for awhile. She was amazing. She wanted to buy a car and rode one of our bikes from Davis to the far side of Sacramento to car-shop, and then had us drive her back to pick it up the next day. I believe Jeri visited her in Switzerland that year.

Next to the bell is a thing that looks like a hockey puck. That was a gift of appreciation given to all of us on her committee from Joan Sallee to thank us for working on her campaign for School Board.

There is a jester ceramic mask-ish thing that I bought as my souvenir of New Orleans when we went with the jazz choir to be a chaparone. Next to that is my prized "cuteware" box, by Davis artist Heidi Bekebrede. I got that at one of Walt's office White Elephant games at a Christmas party. I couldn't believe someone wanted to get rid of it. 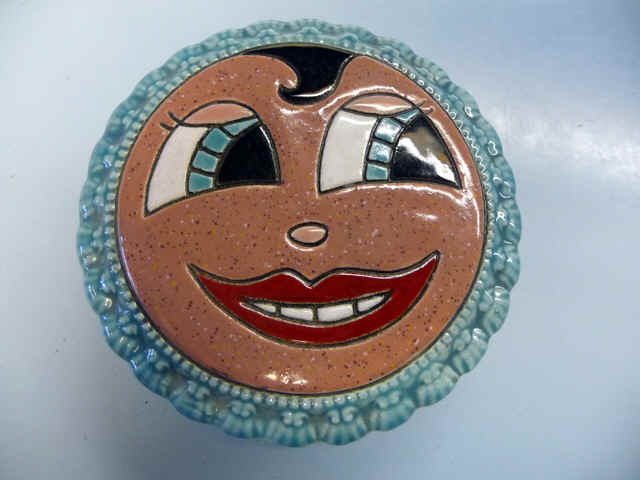 Behind the cuteware you can make out a silver statue of a horse pulling a wagon load of hay. That also came from Suzanne in Switzerland.

To the right of the wagon is a little vase that I bought on an Apache reservation we were driving through. We stopped to look at all the vendor stands and I stood there waiting for Walt to go back and get money. I still remember the stoney face of the woman and how she never even looked at me during that awkward period.

The two copper things, a tiny teapot and a little vase-like thing, came from a guy from Chile who stayed here. I'm not sure about the two glass things (one a vase, one a glass). I think they both came from Cousin Nora in Ireland, but I'm not sure. The dark statue on the left was a gift from Walt's mother after she had visited Thailand. The two beeer steins were from another of her trips, this one to Germany. 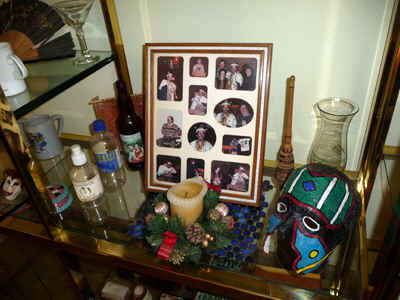 This is the other half of the shelf. There are two plain ol' plastic water bottles, one from Weathervane Playhouse in Ohio, where Jeri worked summer stock for a couple of years, the other from Kilbarri park in Australia, where I visited with Peggy. The last bottle was from our friend Eric's wedding to his wife Nan. Behind that is a square thingie which, I believe, came from Chile, though I could be mistaken about that.

The cool mask is something Paul made. It was a school project and it fit his head. Doesn't come close to slipping on my big head.

The candle in front has no significance, other than I put it on the table as a decoration one Christmas and somehow it just never got packed away again.

And there you have it...all the stuff on our glass etageres and the stories behind them. If we ever get to all the rest of the junk around here and puttin them back in their place again, I will do another record.