You know what they say about the best laid plans.. or "if you want to hear God laugh, just tell him your plans."

Well, my plan for yesterday had been to work at the book store, but then my mother called early in the morning. The minute I heard her voice, I knew she was not well. When Peach and I had been there for Cousins Day last week, she had the start of a cold. She almost canceled, but decided she didn't feel that bad and she really wanted to see us.

Other than some coughing, the obvious signs of a cold, and going to bed early, she seemed OK. In the morning she was feeling sick, but not all that bad.

That was a week ago.

Each day I've been calling to check on her and each day she has felt worse. Finally, when she called yesterday, she said she thought she needed to go to the doctor. For my mother to agree (let alone ask) to see a doctor she needs to be at death's door, so I knew this was serious and I called the guy who is the manager of the book store, told him I couldn't work, and I was on the road about 10 minutes after she called.

I was halfway there before I realized I had forgotten to put on my bra. Fortunately, I was wearing regular pants, not pajama pants!

It was obvious that she was really feeling awful. She said she was so disoriented that she didn't even know what she was supposed to do. She was coughing continually. She ached all over.

We went off to the doctor. "Wouldnl't you know the ONE day I need to see a doctor is the day of a nurse's strike," she said many, many times, though the nurses had walked off in sympathy with another union and it hadn't affected my mother's doctor at all.

But anyway, we got in to the see the doctor and the nurse handed my mother a mask to wear so she wouldn't spray germs all over the office.

Well...my mother hated the mask. She kept taking it off because she didn't want the doctor to see her looking like she did with the mask. I kept telling her it was to protect the doctor from her germs. She did keep it on until we left the office to go to x-ray to check for pneumonia. She took it off in the elevator because she didn't want to look "stupid, stupid, stupid" (her frequent comment). I told her she needed to keep it on for the safety of the other patients. Sitting in the waiting room, she took it off because she felt stupid. She didn't want the x-ray tech to see her looking stupid.

We went back to the doctor and yes, she does have a mild case of pneumonia and she prescribed some antibiotics. The doctor also asked me to spend the night with her, which I had already figured I should probably do.

We went to the pharmacy, which was packed with people and my mother took the mask off because she didn't want to look stupid. She kept asking over and over again, "how did I get pneumonia. I haven't been anywhere but Safeway and church." I commented, dryly, that she probably got it from someone in Safeway who was sick, but who refused to wear a mask to protect the other people in the store. So then she put the mask on, but took it off when she was about to have a face to face interaction with the clerk because, you know, it's better to cough germs on her than to look stupid.

When I try to talk to her about her responsibility to other people she becomes "cute." She acts like some co-ed who is flirting with a guy, thinking that because she is being cute, I won't give her a hard time. I did stop short of saying "With the mask on you look like someone who cares about not making people around you sick. With the mask off you look like someone who is more concerned with your appearance than the health of others around you."

(I had to write that because I wanted to say it SO often yesterday, but didn't want to hurt her feelings.)

So anyway, we finally got the meds and came home. I left her to take a long nap (which she did) and I went off on an adventure. Sort of.

Since I hadn't planned on spending the night, I had no change of clothes and I desperately needed a shower and to wash my hair. I figured if I could buy some sort of "thing" to wear while I washed my clothes then I could take a shower and we'd be just fine. Well, when you're my size, just try to find clothes. Any clothes.

There was no fat lady store in the Northgate Mall, so I tried Sears. Their director says there is a fat lady section, but darned if I could find it. I walked through the entire mall and to Macy*s. Their clothes are on the second floor, but their fat lady section is on the 3rd floor (I don't know why I was offended by that) and I actually did find a pair of slacks that fit me and two tops that fit me. Everything was at least 50% off, some where 60% off. There was no underwear anywhere.

I told the sales clerk that I didn't have my Macy*s card and that I hadn't used it in years, but that I could charge on Visa, which I did.

On the way downstairs, just on a whim I checked out the "intimate apparel" department, certain that there would be nothing for me because there never is, but lo and behold, they did have things in my size and I bought 3 pairs of underpants and a nightgown (the "thing" I was looking for in the first place) that was priced at $70, but with the discount was only $20. Too good a bargain to pass up.

Ultimately, since I didn't get back home until nearly time to go out and buy pizza for dinner, I never did take a shower that night and didn't need to wash my cloths. But I did need the clean underwear, so it was good that I went shopping...and now I have new clothes to wear after all!

My mother had a horrible night and slept hardly at all. I knew if I stayed longer, she would feel the need to sit up with me and be gracious so I packed up and headed home. I've already had two phone calls about things she can't remember. I'm still toying with going back down there maybe tomorrow, but she has an army of people who have called to do things for her, so I probably won't, unless she needs me. 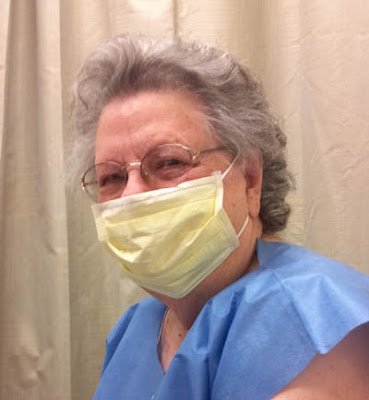 I'm so sorry about Mom's pneumonia. Hope things heal up quickly...for both your sakes.

Wishing your mom a speedy recovery. Tell her she looks like a surgical nurse with the mask! ;-)