Times Business reports "We’re in the middle of yet another global financial rout, with stocks plunging around the globe, the sort of panic we’ve witnessed with sickening regularity in recent months. And as usual, Europe sits at ground zero. Italian government bonds got hammered on Wednesday, smashing through the important 7% level to a new euro-era high."

The Economic Times reports that "The developments in Greece, epicentre of European debt turmoil, is being closely watched internationally since an ultimate default could drastically impact the fragile global economic recovery."

The financial crisis world-wide has been kind of something in the background that I have been aware of, but haven't really paid any attention to.

But the economic crisis hit close to home yesterday. 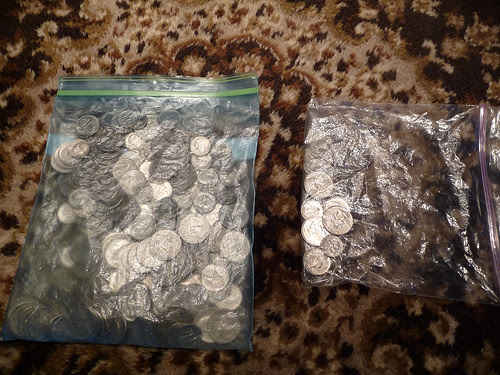 (That's hers on the left, compared to my paltry sum on the right).
Yesterday was not her day.  At the end of our eight games of "65," this is what Peach had left: 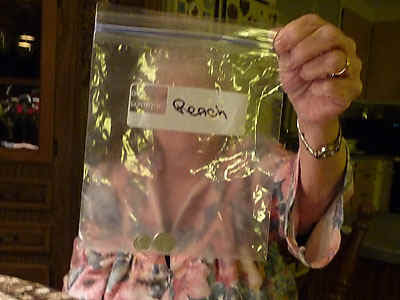 The fifteen cents in her bag was not even enough to play another game, and we called a halt to games last night.  This morning I offered her a bail-out and we played one more game, which she also lost.  I'm not exactly sure, but I think she is going to rob her husband's stash before our March Cousins Day.

Despite Peach's economic downturn, we had a lovely time.  My mother was doing well, which is always nice.  She also won five out of the 9 games we played over two days and, given how competitive she is, that was wonderful.

It was Peach's turn for drinks and hors d'oeuvres and she brought some "empanitas," which are, not surprisingly, little empanadas, fille with chicken and cheese and served with a dipping sauce.

For drinks there were something called "mango daquiris," which she bought at WalMart.  They were delicious and we toasted Kathy. 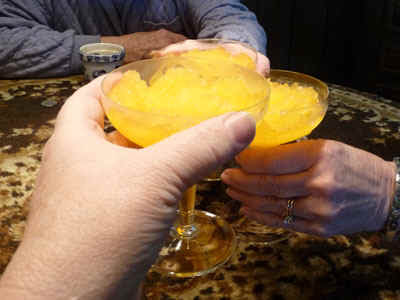 Seeing as how these were sold at Wal-Mart, I decided to check the ingredients and this is what I found: 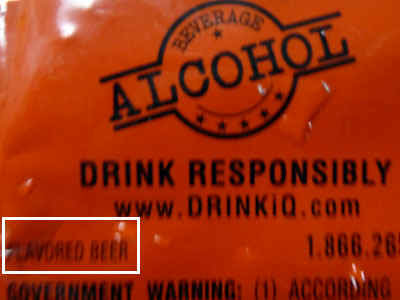 Though this tastes like a weak rum daquiri, it is actually just flavored beer!  But definitely tasty.

I brought my $35 worth of crab and for once we had our fill and we even had leftovers. 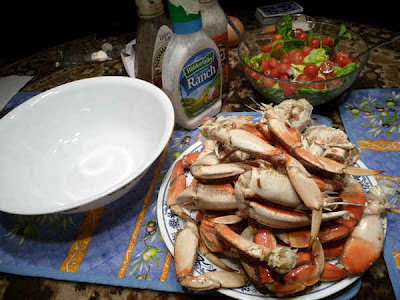 Then, as the table was cleared and we were starting to get ready to play another game, Peach hauled out the cutest little birthday cake for me. It was delicious too.  Then we played our last game of cards, watched Two and a Half Men and Peach decided she was ready for bed.   My mother lasted through half opf another show and then she went to bed too.   I stayed up to watch Smash but fell asleep before it ended, so we all were feeling the effects of our "flavored beer" last night I think!!
Posted by Bev Sykes at 12:34 PM