A couple of years ago, after I saw the movie The Bucket List, when a lot of people seemed to be making up long bucket lists of their own, I sat down to see what I would put on a bucket list.

It was difficult at first, but I finally managed to pull together ten things I would put on a bucket list, most of which will remain in my bucket after I've kicked it, but it included things like that inland passage cruise to Alaska that I've been talking about for years, seeing Iguacu falls in Brasil which my Brasilian brother Nelson has been telling me he wants to take me to, and seeing firsthand the Sheldrick elephant sanctuary in Kenya.  Big stuff.  Not likely to happen.

I didn't think about little things which were more do-able.  I should have added spending a couple of days in the Monterey area, seeing the aquarium, visiting the Steinbeck museum and eating at Steinbeck house.  That trip has been on my bucket list for about 20 years.

Today I actually did something on my bucket list that I didn't even realize was there until last week, though when I thought about it, of course it has been there.

Last week, at the end of my day at the book store, I was being relieved by owner Susan, who usually shows up about 30 minutes before I'm scheduled to leave and we chit chat until Walt finishes the beer he's having at the Irish pub around the corner.

Susan was talking about a trip she and husband Peter had taken to check out some book sales and how excited she was that she had found several copies of "Catcher in the Rye," because often it's a difficult book to find, since it was written in 1945 and not reprinted since 1951.

I was telling her how I had never read the book and we joked about how while the book was often assigned for reading in high schools, it was not in Catholic schools because of the language, the s-word (sex) and the general negative attitude of hero Holden Caulfield.

At one point after I got my Kindle, I thought about seeing if it was available for the electronic readers, but mostly what I found were study guides, cliff notes, and one treatise which cost $36.  Needless to say, I didn't follow up.

"Catcher in the Rye" is not exactly something that is on my mind very often, but whenever I hear about it, like in a Jeopardy question or somebody mentioning it in passing, assuming the of course everybody has read "Catcher in the Rye."

Well, here was my chance.  A copy of the book right under my nose, and only $3 too.

It's been sitting here for a week.  I was going to take it to work on Tuesday, but I really want to leave Tuesdays for books that I pick up and read at the book store.

But today Walt was working and I decided to take the day off and read "Catcher in the Rye."  It's about the length of each of the books I read each week at Logos and, in fact, I finished it in three hours, give or take a few minutes. 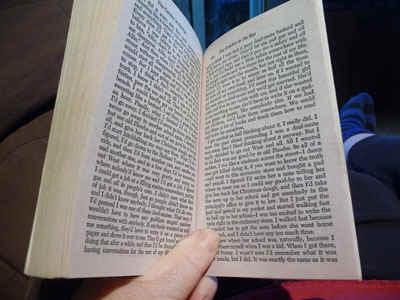 I'm going to be writing a review of it now to post on my book review page, but I'm tickled that I can cross that item off of my bucket list, even if it was only really on it for about a week!
Posted by Bev Sykes at 12:00 AM

Where is your book review page?

I read it when I was 15. I haven't progressed since. Seriously. My mind still works that way. And I'm 45. And female. This can't be good.