Several years ago, when my mother started looking around at "all this stuff" in her house and began thinking of downsizing, someday, she let everyone in the family know that if there was anything in the house we wanted, we should put a note on it so that there would be no question about it.

Everything in the house will eventually be mine to do something with and I will, of course, tend to it, but there were only a few things that I really wanted.  I wanted my godmother's good china, which is beautiful, and has a very interesting story behind it.  I wanted my godmother's blue glass dishes, which I have always loved. I wanted a painting done by a neighbor of ours when I was growing up in San Francisco (It's not a particularly good painting, but it has sentimental value for me.)  And I wanted my grandmother's lamp.
This is a heavy metal ornate lamp that has an interesting history.  The story I've always heard is that my great grandfather found it in the rubble of a Nob Hill mansion after the devastating 1906 earthquake and fire in San  Franisco.  It was a vase and he brought it home.  I don't know when my grandmother acquired it, but she eventually had it converted into a lamp and after she died, my mother got it.  It has been in her house ever since. 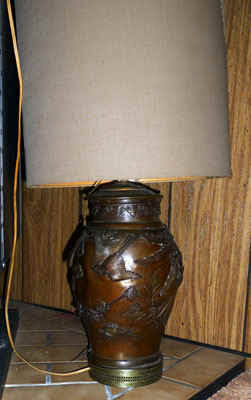 So I wanted the lamp, not necessarily because I had the perfect place for it, but because it was part of my family history and I absolutely loved the connection to the 1906 earthquake and fire.

We have talked about the lamp and the painting from time to time.  I don't even bother about the dishes because my mother doesn't remember I want them and has mentioned giving them to other people.  Whatever.   It's her decision, but I hope she has forgotten that by now.

But I do talk about the painting and the lamp whenever she brings up taking things from her house eventually.

Last week sometime, she called me around 9 p.m., which was very unusual for her.  She said she had found a note saying that I wanted "this lamp" and she wondered which lamp it was.  I reminded her that it was my grandmother's ornate metal lamp.  She said that she was just wondering because she had found this note and wasn't sure which lamp it was.
When Peach and I got to her house and were having our coffee, she said "don't forget to take your lamp.  I have it all ready for you."  She had unplugged it, she said, and she set it aside so I could take it. I told her I didn't want it now; I just wanted to have it after she died.  We actually had an argument about it.  She wants to be rid of "all this stuff" and wanted me to take the lamp NOW.  Ultimately she grudgingly agreed to keep the lamp, but the whole thing just seemed very strange and I wondered what was up.

Well, the whole story didn't come out until after breakfast this morning when she started telling me that my cousin Denise had come to visit and when my mother talked with her about getting rid of "all this stuff," and telling her that if there was something she wanted to take it, Denise mentioned that someone in the family had always admired that lamp and that she would love to send it to her and my mother GAVE it to her!!!!!!!  The lamp that I have been talking about as the only thing I really wanted in her house.

As it turns out, if I hadn't put that note on the lamp years ago, it would probably be winging its way to Alaska or wherever this other person lives.  But after she and I spoke, my mother called Denise and told her that she needed to have the lamp back.  And now, once again, she wants me to take it NOW because she wants to be rid of "all this stuff."
Once again, I assured her that I had no place for it now but if she were to die, I would find a place for it but for now she has a place for it, where it has been for 25 years, and she should keep it.

I should add that my mother attaches zero sentimental value to things.  I can't think of anything in her house that she would look at fondly as a strong enough memory of a pleasant time in her life that she wouldn't unhesitatingly give it to someone who admired it.  Throughout my life she has gone through purges of her stuff and stuff from my childhood because they were so much clutter, without ever asking me if it was OK to throw it away (my high school diary, for example...my collection of dolls I would love to have passed along to my granddaughters for another, her cookbook with all the personal recipes for the things that I fondly remember her making for another), and now that she is obsessed with getting rid of "all this stuff" I think nothing would make her happier than to have people in the family remove just about everything in her home so she didn't have to look at it and see clutter.

But goddammit, if someone takes my lamp again, I am going to be royaly pissed!
Posted by Bev Sykes at 12:00 AM

Email ThisBlogThis!Share to TwitterShare to FacebookShare to Pinterest
Labels: memories, My Mother

If I were you, I would take the lamp now. If you really can't find a place for it, see which of your kids wants it.

My mother threw out (or gave away) my things regularly, always without asking. Then, when she finally moved into senior housing, she wanted us to take everything...

If you love the lamp, get it now.

I agree; bring it home now.

Not sure what happened, but the anonymous comment was from me.