Actually today, it's postcards that I'm more concerned about, though I did get a couple of very nice letters.

I have been on PostCrossing for over a year now. I have exchanged somewhere near 300 postcards with people around the world, cards which have traveled, my stats tell me, 1,630,078 miles. I am part of a group of people who have sent, over the years, more than ten million postcards! 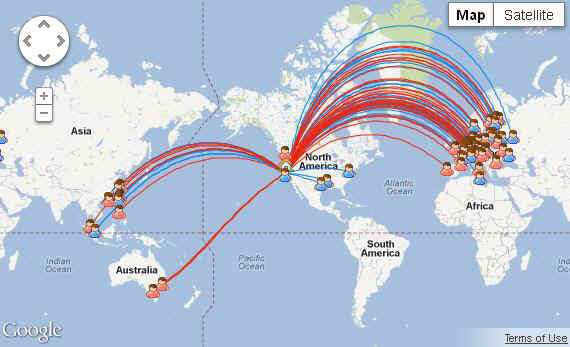 (This isn't entirely accurate, though, because I have received a couple of post cards from Brasil and I notice that South America isn't tagged here and I've had a card from South Africa, though Africa isn't marked either.) 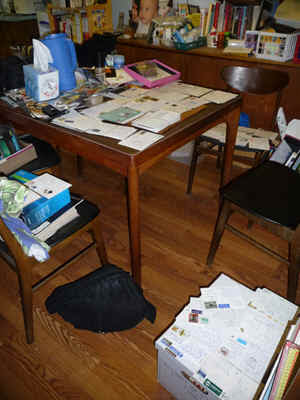 I have been tossing postcards in a box for a year and today I got a bee in my bonnett and decided to sort them by country.

Every surface within my reach was covered with a stack of post cards. It was a surprise to me that I had at least three times more cards from the U.S. than from any other country. I rarely send cards to the US and hadn't realized that I had received so many.

I was also surprised to discover that I had received the most cards from Germany. I would have bet that it was Finland or the Netherlands, but Germany had the thickest pile, with Finland and the Netherlands probably the next thickest.

I have a lot of cards from China, Taiwan (all of whose residents have a very distinctive handwriting, I discovered), and from Belarus, Russia and Ukraine.

There were several countries from which I have received only one postcard: Croatia, Norway, Turkey, South Africa, Thailand, the Czech Republic, Vietnam, Italy, Belgium, Moldovia, Estonia, Trinidad & Tobago, and Slovenia. 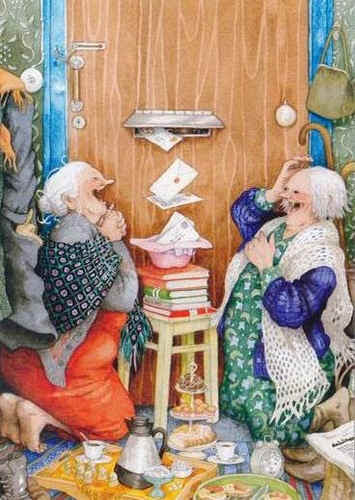 And I love the dellightful Inge Löök old lady cards from Finland. I only have a few of them, but I'm all ready to go back to Helsinki and go looking for them! Löök was born in Helsinki and her cards remind me of Char and me...how much fun we would have had when we were in that city shopping for cards!

It's also interesting how people write their postcards. Most write short things about the picture on the front, or about their lives (that's what I do, mostly), some write amazingly long personal notes in teeny, tiny print. The disappointing ones are the ones that come with nothing on it, or just "happy postcrossing."

The only down side of Postcrossing (other than the increasing cost of international postage!) is that you don't really make friends on the site. You have the address of someone to mail a card to but unless you want to include your own address, the recipient doesn't have your address. I have received one or two personal messages, but mostly this is about the cards and not findings friends. Still, I have received some really fun cards. If you'd like to see my favorites, you can follow this link.

I also made a major dent in the letters I have not answered during (a) Christmas, (b) my mother's pneumonia, and (c) the computer problems. Still a long way to go, but I'm getting there! 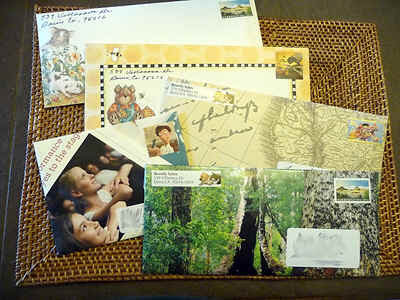 Five letters today alone, along with a bunch of post cards mailed! What's nice about this pen pal project is that some of these pen pals are starting to feel like friends. That's nice.