I received a notice from the SPCA that its thrift shop is in need of donations.  I also know that Logos (the book store) can always use book donations, so I decided to start filling boxes to donate.  I figure if I do even a shelf a day, that's a shelf a day I didn't do before.

I started with cleaning out cookbooks.   There was a time when I collected cookbooks.  Lots of cookbooks. But I find that I rarely use any of them now because it's so easy to just google ingredients or recipe when I'm looking for inspiration.

So I got rid of an entire shelf of Weight Watcher books (some dating back to when WW was first started).  I can't remember when I last opened one and even should I be so inspired to need them again, I could get whatever I wanted on the internet.  That filled almost a whole banker's box right there.  I also included some books that I know I will never look at again.

I was in the midst of sorting through cookbooks when Walt panicked and asked what had become of his beer cookbook. "Beer Cookery" is one of those books which I will always keep, even if only for one recipe. 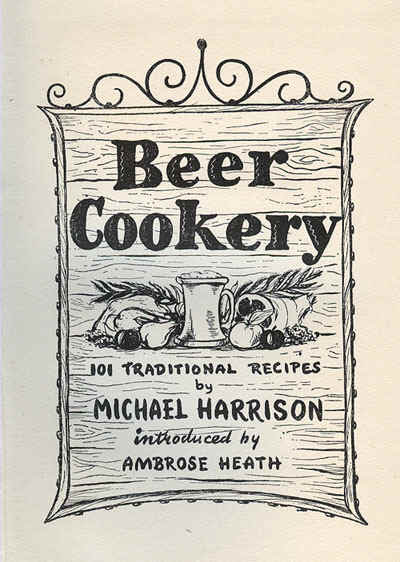 I don't think we have used the "Beer Cookery" (published in London in 1957) for anything but the recipe for "chops" (we use lamb chops) which Walt makes every few years. This year he made it for my birthday.

1/2 pint ale
2 eggs
capers
vinegar (tarragon is excellent here)
nutmeg, lemon, parsley, seasoning
Fry the chops--well seasoned--in the ordinary way, and drain off the fat into a basin.  Pour the ale into the frying pan, season again, and simmer gently until the chops are tender.  When this has happened, take the chops out of the pan and put aside to keep hot.
Pour the liquor from the pan into a basin, add a little vinegar, some capers, the yolks of the eggs, a grate of nutmeg and a pinch of salt.
Beat this up well and add it to the fat that you drained off from the chops.  Pour all back into the frying pan and stir until the sauce thickens, when you should pour it over the chops.
Serve the chops garnished with a slice of lemon and a spring of parsley.

Other books that I keep, even if for only one recipe, include a soup book where I get my wonderful lamb soup of the Middle East, the pie book I always use for lemon meringue pie, and a bread cookbook that I bought long before I ever had a bread machine.  I would also never give away my Women's Day Encyclopedia of Cooking (12 volumes) or my Good Housekeeping cookbook that I received for a bridal shower gift.  It was my bible--I liked it much better than "Joy of Cooking"--for many years.

I haven't made a huge dent in the collection, by a long shot, but I have rearranged things, dusted things, and freed up at least half a shelf.  It's a good start.
Posted by Bev Sykes at 12:00 AM

Different strokes for different folks -- the one cookbook I would keep is The Joy of Cooking. I read it for the background science, because we didn't have Alton Brown forty years ago. 8-)

Funny how we all seem to have a cookbook collection. I should really cook more often.