I spent the day with pirates...and it's not even "Talk Like a Pirate Day."

With my computer back and all set up again, I have been ploughing through letters that need to be answered. Boy...start a little hobby like letter writing and it's amazing how quickly you get overloaded when you can't write for a few days!!!

Anyway, one pen pal is a guy named Lucas, who is fairly new to pen palling, and who contacted me from the address posted my Pen Pal Project blog. We are in the "getting to know you" period, but when I told him about being a theater critic, he gave me his theater background, which involves touring with Riverdance for a year and then going into a show called The Pirate Queen, which was headed for Broadway, but apparently ran out of steam (and money) in Rochester. Lucas was going to be an understudy.

I was intrigued with the show for two reason, first because I was wondering about all the special effects he talked about and second because, well, with a name like Pirate Queen I wondered if this was Gilbert & Sullivanesque, something historical, or a gay musical. It turns out to be something historical, about the real-life legendary Irish chieftan, Grace O'Malley. Reading through the musical's web site made me want to know more about her, but a brief check didn't yield much in the way of books that sounded interesting on Amazon (which is just as well, since I have too many books waiting right now anyway).

But I did pull up the show on iTunes and listened to enough of the music that I was intrigued and downloaded the whole album.

This musical was from the people who brought you Les Miserables and also the people who brought you Riverdance and there certainly would be no guesswork involved with that! We played part of the score on our way to Sacramento this afternoon and not only is it unmistakably by the people who wrote Les Mis, but even the voices of the performers have the same distinct sound to them. There is the Jean Valjean character (who is the heroine's father), and the heroine who sounds like a grown-up Cosette and there is even a "Master of the House" number with a guy who sounds for all the world like the actor who played M. Thernardier on the original recording.

Shortly before we reached our destination, the music shifted and suddenly there was a Riverdance-like dance number.

Overall, I am liking it, but have only heard about 1/3 of it so far.

Our destination for the afternoon was a LOTS (Light Opera Theater of Sacramento) production of Pirates of Penzance. This show is running two week ends in Sacramento and a week end in Davis and I figured if I could catch it in Sacramento, the review would make a nice bit of promotion for the Davis shows.

Though this company was begun by someone who performed with the Davis Comic Opera company many, many years and left to start his own company (which is now celebrating its 31st year), I had only attended one production. I guess in the early years there was such competition between LOTS and DCOC that it felt somehow a slight to DCOC to cross the causeway and see a LOTS production.

But a couple of years ago, the daughter of some friends at The Lamplighters was playing Katisha in a LOTS production of The Mikado and I went to see her. I thought her performance (even though she was too young for the role) was one of the stronger performances and had some negative things I felt about the overall production. I probably thought the tempos were too slow (after nearly 50 years of Lamplighters productions, I usually think all other companies have tempos too slow...I even challenged film director Mike Leigh about the tempos in his movie, Topsy Turvy, but he very imperiously informed me that they were "absolutely, completely accurate."

Anyway, I hoped that this LOTS Pirates was going to be a good production.

The theater is in a neighborhood in Sacramento in a building which may have been a school at one time. When we were parking, I saw a lot of people in pirate garb walking into the theatre, which seemed very odd, but I thought that maybe the facility was so small that they had to come to the show in their costumes (what a silly thing for me to assume! The very thought of that would give costumers heart attacks!) but, no, it turns out that about 1/4 of the audience had come in pirate costumes to get into the spirit of the thing. 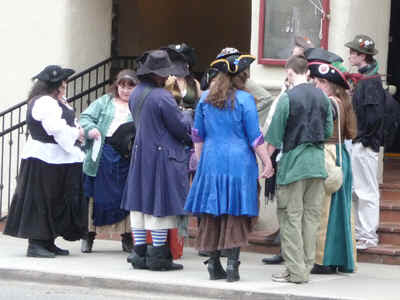 As for the actual Pirates on stage, I was blown away. For one thing, the orchestra may be one of the best community theater orchestras I have heard in this area. Definitely professional level (though I can't figure out why the musical director cut 2½ minutes from the start of the overture, and have written to ask him to give me his thought process before I write the review).

The cast was uniformly excellent. There were a couple who could have had more volume, but man when that first male chorus started singing it was electric, and the women were as good or better. "Hail Poetry" sent chills down my spine. The leads were great, especially the woman who played Mabel, and the young woman in the small role of Edith was the kind of actor you just can't take your eye off. The group should do Oklahoma. She would be the perfect AdoAnnie. 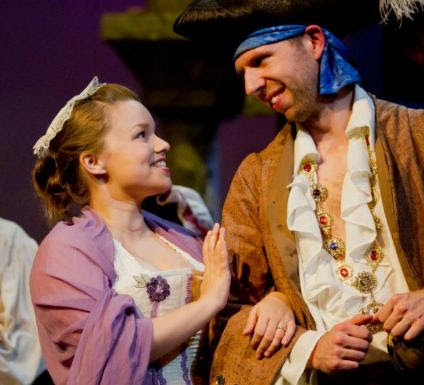 So the matinee did not disappoint and I look forward to writing the review. I love writing reviews when I am totally and completely familiar with the work...and especially when I actually like the production!
Posted by Bev Sykes at 12:02 AM