December 1 is world AIDS day.  When AIDS was first identified, you rarely heard of it other than there was some gay cancer that was killing homosexuals.  Then Rock Hudson came out with it in 1985 and President Ronald Reagan finally mentioned it.  We've gone from awareness, to watching hundreds/thousands of wonderful people die of the disease, to being afraid to be near anyone with it, to the possibility of meds, to meds that seem to work and now nobody thinks of it as an automatic death threat any more.

I met my friend Steve Schalchlin in 1999 when his musical, "The Last Session" was finishing its run in Los Angeles.  I'd been on a discussion group with people who loved this musical.  I got on the list by a woman named Gabi Clayton, whose son was gay and who committed suicide after a gay bashing.

"The Last Session" was ending its run in LA the weekend that Paul had been scheduled to give his latest monologue and after his death I didn't want to be in Davis on that weekend, so we decided to drive to LA and see the show.  It changed my life.

Steve was dying in 1996 and started a blog to keep people apprised of his health (he's listed as the 5th person to have a journal on the internet).  As the meds he was taking began to keep him alive, his following grew, he wrote the musical with his partner Jim Brochu.  I met him a few weeks after we saw the show.  We had a lunch that lasted 3 hours and he became one of my best friends.  I traveled with him when he gave speeches about living with AIDS.

He is now on a medication that works.  He and Jim live in New York (so I haven't seen hm in years) and he's working part time as a musician, while continuing to write new music, having learned the guitar (fulfilling his lifelong dream of becoming a rock star).

When December 1 rolls around, I think of the people I know who have lost their lives to AIDS, like Arthur Conrad, John Gilkerson and others from the Lamplighters, and friends we have known in Davis, and I am so grateful that Steve is still alive and doing so well.  I love him. 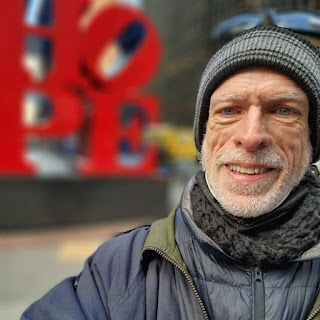