Bouncer will be 16 next month.  She's a lab mix and they usually live 12-13 years, so she's an old dog.  Her vet is surprised that she is still alive.  It's probably due to the excellent care Ned  takes of her and the special food he feeds her, which he makes himself.

But she is slowing down. Her back legs aren't happy and she kind of drags them when she walks down the hall.  And we've decided she has developed Alzheimer's.  She has selective deafness.  She doesn't listen to anything anybody but Ned says to her.  Even if you call her to give her a treat, she doesn't  respond.

When she moved in here, she wouldn't  let me pet her on the head...she prefers to be petted on the rump so whenever she comes to me and I start to pet her, she turns around and backs up.so I can pet her where she wants to be petted.  Now she lets me pet her head.

She's always in the way whenever I walk anywhere and it used to be that all I had to do was touch her and she moved.  Now she looks at you as if to say "Yes?  Is there something you want me to do?" and Ned has to drag her away.

She is usually under  the table at dinnertime, but now she sometimes seems to be lost and not know how to get out.

She has a bed upstairs with a cover on it and she sleeps under the cover.  Marta lifted the cover for her and she stood in the bed, but wasn't sure what she was supposed to do.

Sometimes when someone goes to give the dogs a treat, she isn't sure what is happening and you have to remind her that there is a treat coming.

That she does as well as she does is pretty amazing and Ned & Marta are lucky to have her this long -- Ned says it's the longest he's had a dog. We're keeping her as comfortable as possible, despite her Alzheimer's....just like my mother. 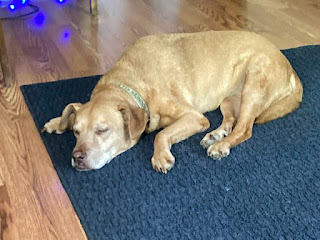 It's so sad to see them decline. We think our long-time pooch might have been getting dementia, but it was among the least of her problems: pain, incontinence, and falling topped her list. We had to say goodbye to her last spring after 15 years. And unfortunately Mom's definitely dealing with dementia--it's rough, but we do the best we can for our people and our pets.