No need to get on the  treadmill today (I recently got a pair of Crocs to wear when I use the treadmill instead of my slippers!).  I definitely got my exercise today.

I had a dental appointment at 11.  Ned took me there and helped me get into the office with my walker.   I had an hour cleaning and then met him and Walt outside when it was over.  We were going to the bank to get the money I have to take out from my retirement account each year.  We drove to the bank and Walt got his check and then they asked for my ID.  My drivers license was not in my purse and they wouldn't accept any of the other dozen or so things with my name on it,  I don't have a clue what happened to my driver's license, which is not a big problem since it expires in February and I'm not going to get it renewed, since I don't drive any more.

So we piled back into the car and drove home,  Ned went looking for my license and Walt went to use the bathroom.  When they came out, Ned couldn't find the license and Walt had lost his license.  Ned found a very old, expired drivers license of mine and Walt got my passport, which expired in 2019 and we hoped the bank would accept one of  them.  Walt also hoped that he had left his drivers license at the bank, since that was the last time he had it in his hands, to give to the teller as ID.

The teller looked everywhere and couldn't find the license so while she was making out the cashier's check for me (never looked at the expired date on my passport, thank goodness ), Walt was looking thru his pockets and Ned was going through his wallet -- again.  Ned finally found it in an odd place in his wallet.

So by 2 we had it all done and I had done enough walking to count as 2-3 weeks on the treadmill.

My big accomplishment of yesterday was that I finally finished answering all of the letters that stacked up while I as in the hospital, and those which have arrived since I've been home.  Fortunately, I received more mail today, so I have something to do tomorrow. 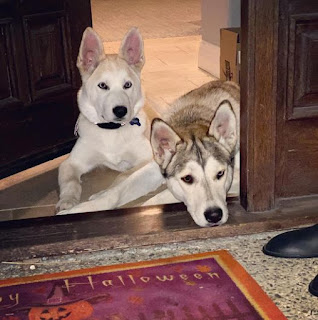 I thought for half a second that the dog on the left was wearing a bowtie. And a very handsome fellow he was. And is, even sans formalwear.