Christmas is finally over.  After Christmas eve with Marta's family, Christmas day with her family here at our house, Boxing day at our friend's house and then Tom and his family arrived on Tuesday for our Christmas celebration with them (they had been her Laurel's cousin's house for Christmas day).

They got here around 2:30 and we spent time in the living room having hors d'oeuvres and tossing hoops at antlers on Brianna's head.  Ned taught the girls how to use our bidet. 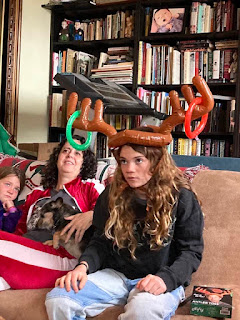 Bubba dressed up for the occasion. 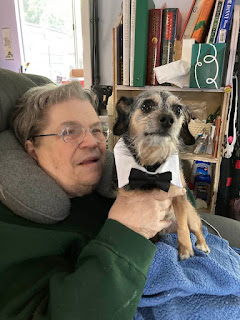 We had leftover Christmas dinner for dinner and it was delicious, as it was on Christmas night. 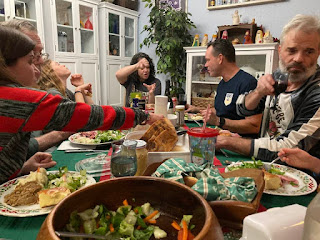 After dinner, we listened to the "Santa Rhumba" and then opened gifts. 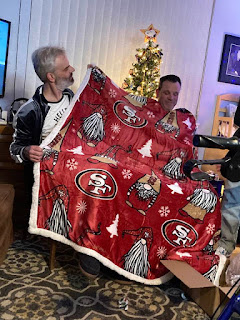 I was so pleased.  I had gifts for both Brianna and Lacie that I wasn't sure  they would like, and gifts for each that I was pretty sure they would like.  As it  turned out. the gifts I wasn't sure about they each liked, a kaleidoscope for Brianna that she had to assemble herself (she did it in minutes) and a bracelet making kit for Lacie, who made some beautiful bracelets in the morning. 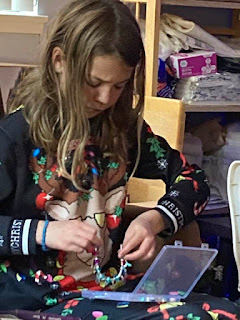 After dinner we watched Die Hard 2, which isn't exactly a Christmas movie and not really a movie for kids, but they had watched Die Hard the night before and were anxious to see the sequel.  Entirely too much violence for me!
Everybody bedded down for the night and we all slept well.  Ned fixed breakfast for everyone in the morning and then the group got on the road.  They had to drive all the way to Santa Barbara today because the weather today is clear, but it's scheduled to be raining for the next three days.
We managed to get a family photo before they left. 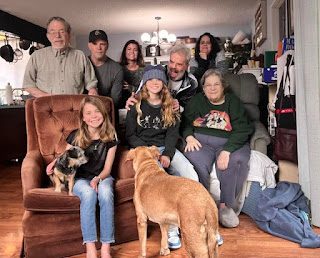 We all took naps when they left!
Posted by Bev Sykes at 2:38 PM

Having followed you for many years I am still amazed at how the grand daughters have grown. Beautiful young ladies.

I can't believe how grown up they seem to be!