We were invited to a Boxing Day party at the home of our friends Stephen and Rich.  Walt had been to their new house before, but I had not because I was just home from the hospital at the time.  But they had a beautiful tree. 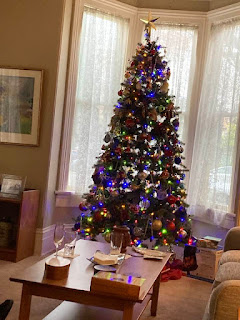 It was a small group of people (maybe  dozen), but some of our best friends in Davis. 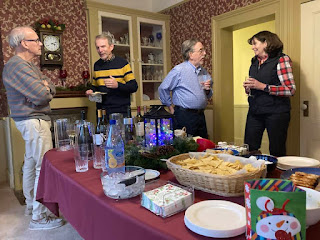 I had a  great talk with a man whose late wife published a book called "Rhino Dreams."  It was a great story and a wonderful look at Africa.  I found out after I read it that neither she nor her co-author had ever been to Africa.  He said they had tons of books they read which helped them write the book. I think it was my only conversation with him--ever, though we have been to social gatherings together for years.  But he is very shy and hard of hearing.  However we managed to sit together with nobody around and neither of us had problems understanding the other.
I had to take a picture of Rich's gift to Steve, which was a selfie painted and signed by Joan Baez. 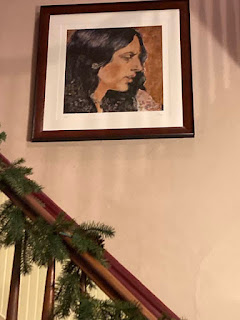 (They have another painting of hers of Ruth Bader Ginsburg)
We stayed a couple of hours and then came home.  I felt so good getting out and seeing so many people I have not seen for two years, what with my surgery and the COVID restrictions.