When I was visiting my mother the other day and she was talking about the difficulty of getting rid of all of the "junk" on her shelves (very, very, very few), I was telling her of my own difficulty getting rid of mine (lots and lots and lots) and how few things I was able to actually throw away and I told her about my project of photographing things, posting them here, and telling the stories about each thing.

It reminded me that I haven't done that in awhile, so here are the next two shelves. 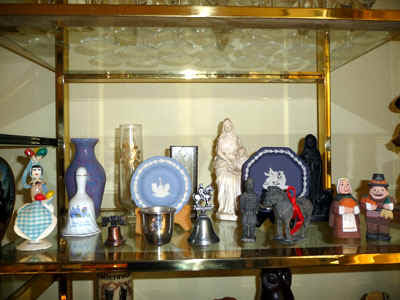 The figure on the far left is stamped "Jamaica," so it must have come from Walt's mother's house. It's one of the few things I have kept. It reminded me of someone dressed for Carnaval in Brasil and I just liked it.

The bell next to her was given to us by a friend named Susan Ware, whom we knew from Tiny Tots nursery school in Oakland. We had given a dinner party at our house in Oakland, some time before 1973, and she brought this bell as a hostess gift.

Next to that is a little Liberty Bell, which I bought when I spent a day touring Philadelphia. The silver cup has a crab engraved on it and I think Walt brought it back from one of his trips to the DC area. The bell next to that is from Boston and again, I'm not sure but I think I bought it in the shop which supposedly stands where Paul Revere's shop did back in the day.

OK...going to the back row now, the blue vase is a lovely vase that was given to us by the proprietors of the wonderful Maxfield Inn in Naples, NY when they learned that it was our anniversary.

I can't remember where the rose vase came from, but I kept it because I liked it. Next to it is a square vase which can't be used as a vase because it's cracked, but it was made in a special class by Celso Gutman, a friend of our Brasilian son Eduardo, when the two of them were living in Davis in 1981 (Celso lived with a different family).

Next to Celso's vase is a statue of St. Anne and Mary, who would grow up to become the mother of Jesus. My godmother gave this vase to me, because my middle name is Anne, when I made my first communion.

There is a black statue of St. Brigid next to St. Anne. I bought it at a convent we visited in Ireland, because I went to St. Brigid grammar school.

In the middle are two little Wedgewood dishes that I bought in England. I decided on our first trip that I wanted to "collect something" and I decided to get an affordable little plate, but somehow that resolve disappeared by the time we were making our third trip to England. 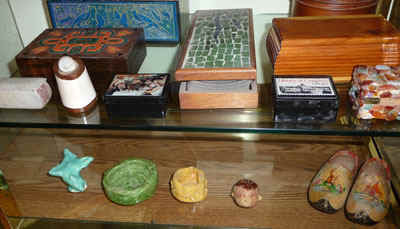 I'm not as good at identifying these as I am the other stuff. The top shelf is the "box shelf." I don't collect boxes, but people give them to me. The one in the middle is a box Gilbert decorated with green mosaic tiles. It holds the stereopticon slides of the Palace of Fine arts for the viewer on another shelf. To the right of that is a box I bought at the Library of Congress and to the left of it is a box I bought at the Philips Gallery in Washington, when I was working there. Left of the Gallery box is a small container made out of an animal bone with a wooden top and bottom and a shell on top. The other box is made of marble, I think. It came from someone from Chile. I can't remember where the boxes in the back on the left and right came from, but I kept them because they were so pretty.

On the bottom shelf, the first two clay things on the left were made by Walt when he was in school, the yellow bowl was made by Tom and I don't remember who made the round head (I hope one of the kids will tell me!). The wooden shoes were brought back from Holland by Walt's mother.

(We're almost finished with all this stuff, you'll be happy to hear!)
Posted by Bev Sykes at 12:02 AM

Email ThisBlogThis!Share to TwitterShare to FacebookShare to Pinterest
Labels: tsatskes

it is amazing how interesting is some other people stuff:) realy.i dont keep much stuf and somtimes i regret i did not.(i know i have a lot of spelling mistakes, too laizy to chek)

We got to visit the Phillips gallery once - loved the building almost as much as the art.

My cousin also has a pair of wooden shoes that I bought for her while in holland and the outdoor market there in amsterdam is something else . I was going to bring back some cheese but good ole customs told me no and threw my cheese away at the airport !!! So you see showing those wooden shoes brought back some memories .LOL !!! Im happy to report I am feeling better .