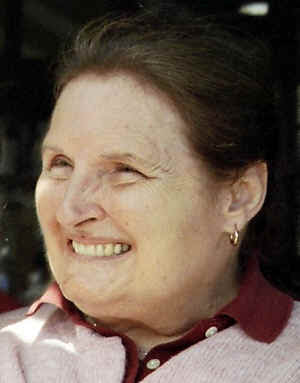 Our Pinata Group has lost its first real core member. Concetta Finocchio Jorgenson died last night. It is an amazement to all who knew her that she lived to celebrate her 70th birthday. She was diagnosed with Multiple Sclerosis before we moved to Davis in 1973. I cannot remember the last time I saw her with movement below her neck. Yet, despite her condition she lived a full life, traveled as much as she could, ran the Newman Hall Alumni Association for perhaps decades. She was an amazing woman.

I met Concetta when we were both attending UC Berkeley. I was the latecomer and missed most of the brouhaha surrounding the National Newman Club convention, which Berkeley hosted in 1961 ("Follow the Sun in 61"). That convention became the glue that bound together a large number of people whose experiences during the planning and execution of it became the stuff of legend. Out of its ashes, over time, arose the phoenix of the Pinata Group, my oldest and dearest friends. 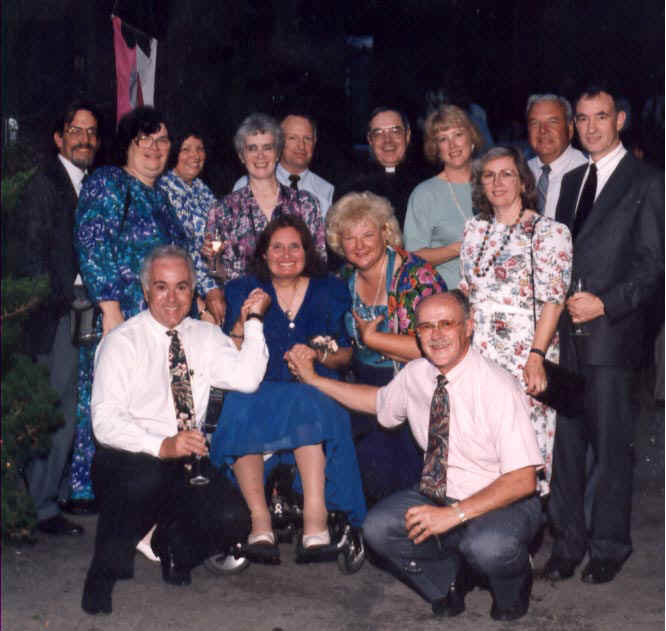 Pinata Group (and others) at Concetta's daughter's wedding
(the priest in the back row was the priest who married Walt and me;
he died several years ago)

Just to briefly recap for those who may not know what the Pinata Group is, we were five couples who met, dated, and married at Newman Hall, Berkeley, in the 1960s. Many of us were attendants at the weddings of the others. Among us, we birthed 22 children, who have all been raised as cousins to each other. Many of us are godparents to many of them. We lived near each other in Oakland for a few years until the 70s when we started spreading out, geographically. Many of our children went to nursery school and early grammar school together. Each New Year's Day we would have a big party (because we didn't want to exclude the kids and have an adults-only party on New Year's Eve), which centered around the kids. From 1966 forward, each party included a pinata, for which there were strict rules, like lining up in birth order, youngest to oldest. The last time we had a pinata for the "second generation" was at the 40th birthday party for the five kids who had been born in 1966. They lined up like they always did. There was a pinata at Jeri & Phil's wedding, which was hit by the children in the 3rd generation, lining up, youngest to oldest.

I met Concetta around the time of the convention. Of all the Pinata People, she was probably the one I knew the least. Her parents owned the famous San Francisco night club, Finocchio's (a popular stop on the Greyline tour for decades) and Charlotte, with whom she attended high school, remembers seeing shows there when she was probably far too young to be night-clubbing.

Her wedding to Eric was a gala affair, with reception at Oakland's famed Claremont Hotel, overlooking the San Francisco Bay Area. They moved into a beautiful home high in the Berkeley hills. I remember the big bear skin rug on which many of our naked Pinata babies had their photos taken.

I remember the Pinata party we had there, where all the kids played downstairs, pretty much unsupervised. I don't know if they EVER got the candy out of the wooden floors, from the pinata which was broken down there. All of us "responsible adults" were pretty embarrassed by the behavior of our children.

It was late 1960s or early 1970s when she began to experience double vision and was eventually diagnosed with MS. She continued to be active and I remember parties she hosted from her wheelchair. Her husband left her not long after her diagnosis, leaving her to raise their four children. She raised their children alone in that house, with the assistance of caregivers, and the kids themselves.

When the fire erupted in the Berkeley Hills, all the houses on her block were destroyed except Concetta's. If you ever saw the movie made about that fire, her story is featured prominently, how she was rescued from the house and taken through the flames to safety. We hoped she would move off of the hill, but she was adamant. She wanted to stay in her house. Concetta was always adamant about most things!

MS never slowed her down. We all, at one time or another, were drivers for her to parties and other events. Char & Mike, and Jeri & Bill put in yeoman's duty, especially Char and Mike who even accompanied her to Australia to visit her daughter, who had married an Australian. Concetta wanted to be there for the birth of their first child. She made several trips to Australia, until her daughter and family finally moved back to California. 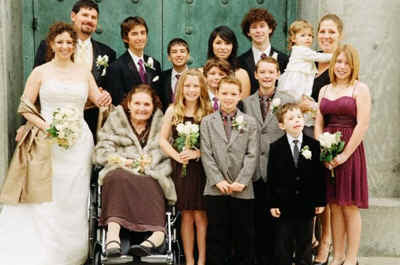 with her grandchildren, at son Eric's wedding

The last time I saw her was at her 70th birthday party, where we all marveled that she survived to 70. The time I saw her previously was during one of her hospitalizations, when we wondered if this was "it."

Our friend, Audrey (also a pinata mother) put it beautifully: Having known Concetta as a vibrant young woman continually engaged in a whirlwind of activities, never walking, always running, it has for many years been heartbreaking to see her so confined by the effects of MS. Yet she epitomized a level of faith and courage that was astounding, always smiling while enduring so many hardships, always concerned about the well-being of others in her life. She will be missed, for she has left us with a vision of true endurance and faith, and our faith tells us that she will be happy and with God in heaven forever. 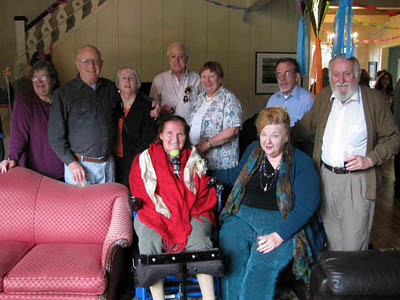 You've lost too many friends in recent months. So hard!

Our friend's husband with MS died around Thanksgiving. He'd been in a wheelchair while I've known him, but was one of the most cheerful, fun people I'd ever known.