"You certainly have been going to a lot of birthday parties," my mother said to me when I called her to chat at a rest stop, while we were en route to San Francisco. I hadn't thought about that, but I guess with today and the recent 102nd birthday of Herbert Bauer, we have been to a couple of birthday parties.

We went to San Francisco this afternoon to help our friend Roger Pierson, from The Lamplighters, celebrate his 70th birthday. 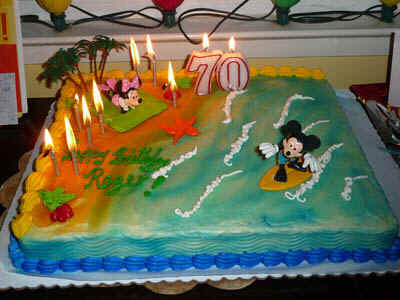 Roger hasn't performed with the Lamplighters in many years, but he began his career with the company in 1968, so he is definitely one of the "old timers," and is part of the Gilbert dinner that we hold each year in memory of Gilbert Russak. The members of the company who came to Roger's party were some of our best Lamplighters friends. There were also people from his work, and neighbors and probably other people there. Since the party went from 4 p.m. to 10 p.m., people came and went and while the apartment was always full, it was never crowded.

At some point there was the usual "Happy Birthday" song. It always gives me chills...you have never had that song sung to you until you get a room full of professional singers doing it in multi-part harmony!

The birthday boy wanted his picture taken with everyone who was there, and the apartment size being a limiting factor to taking a group photo, it was done in groups of two or three, and we all lined up for a quick shot with the guest of honor. 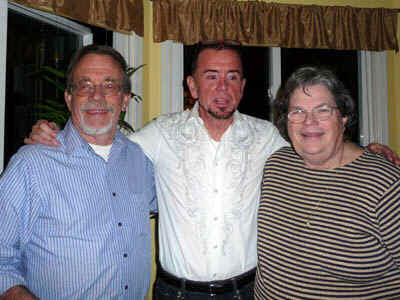 I handed my camera to a woman for her to take a picture for me, and then, as she had to leave herself, I became the official photographer, following Roger around and taking pictures for him on his camera.

I'm looking at that picture now and noticing something strange. One of the guys there, Bill Neil, who has performed with the Lamplighters off and on since 1965 (he still shows up on occasion for a small role) was commenting about how he's not as tall as he used to be and how when he went to a family gathering he hung out more with the women because he was now shorter than all the other men.

I have always been taller than Walt but with age (and the stooped posture I seem to have permanently acquired), I am now shorter than he is!). And yes, I really do have two boobs, but one seems to be squished in Roger's armpit.

Anyway, it was really a nice, low key party, with Roger supplying all the food as his gift to us, and I got a chance to visit with some of my favorite people.

We left around 8 to get home to feed the dogs and when we got here there was some 'splaining to do to Lizzie because the last thing I did before we left the house was to have a nice conversation with this lovely cat, recently clipped for health reasons. 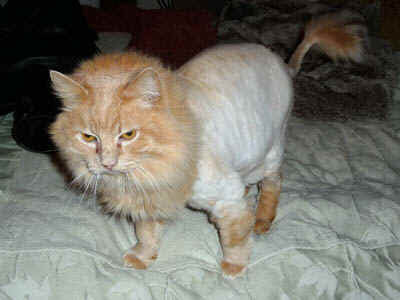 She rubbed her head all over me and I know Lizzie was confused!

As I head off to sleep, there is a tickle in my throat and that pre-cold feeling in my nose. I hope I have not caught the cold my mother had on cousin's day. When I talked to her today, she was still feeling miserable.

oh gosh it is cold and flu season , get rest and drink plenty of fluids .