What do you get a man for his 102nd birthday?

If the man is Herbert Bauer, "the conscience of Davis," the answer was simple: books. The man (who does not wear any corrective lenses) is a voracious reader, reading often a book or two a day. His friend Nancy Keltner has been keeping him in books for a long time, visiting used book stores and garage sales and asking friends to loan books, which will either be returned to the owner, or donated to the pubic library after Herbert has finished reading them.

Two years ago, on Herbert's 100th birthday, Nancy headed a committee which threw one of the biggest parties the town had ever seen. The Davis Art Center was packed with people and I was pleased to be a part of the planning and execution of the gala celebration.

On the event of his 95th birthday, I quoted from an article I had found on line: "In addition to working at his medical practice, Herb has dedicated his life to children, to those less fortunate, to those in need and to those who cannot advocate for themselves. He served on the city's Social Services Commission, was the first chairman of the Davis Peace and Justice Commission, the precursor to the current Human Relations Commission, and was a founder of Yolo Family Service Agency."

Recently, Nancy, my friend and Scrabble buddy Joan, and I were sitting around discussing Herbert's upcoming 102nd birthday. We realized we could never top the 100th celebration, but Nancy thought we could get Davis columnist (and long-time friend of Herbert) to write a column inviting anyone in town who wanted to participate to bring a book to a collection site in several locations, wrapped or unwrapped. Nancy would gather up all the books and wrap those that were not already wrapped, and then give Herbert 102 books for his 102nd birthday.

Happy to oblige (and who can ever say no to Nancy?) Bob ran the article and Nancy set up collection stations. Nancy's great fear was that we wouldn't get enough books. She needn't have worried. She got three times the amount asked for, enough that she could weed out books that weren't approriate, or that Herbert had read and still have enough to make that pile of 102 books.

She invited Walt and me to a small party at her home and I was amused to see that she had decorated the front of the house with three perfectly appropriate books for the occasion!

A photographer was there to take Herbert's photo with his books for the newspaper, and then we sang Happy Birthday to him as he blew out the candles on his enormous German Chocolate cake. 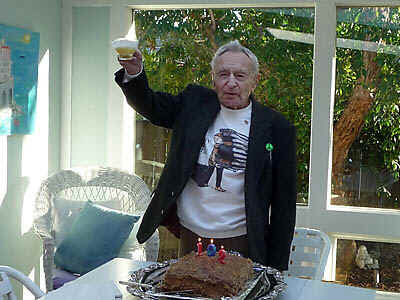 It was over quickly and we made our way home again, but very pleased that we had been included in yet another celebration for Davis' most famous Centenarian! 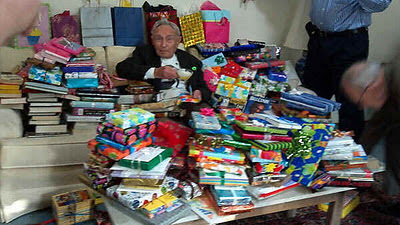 Oh...and it appears that we aren't going to be puppy-less for long. There is a 2 week doxie that came into the shelter, so we'll be back in the bottle-feeding biz very soon.